“For God so loved the world that He gave His only begotten Son, that whoever believes in Him should not perish but have everlasting life.”

“For God did not send His Son into the world to condemn the world, but that the world through Him might be saved.” John 3:16-17 NKJV 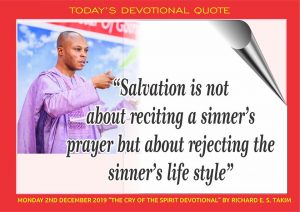 WELCOME TO THE 336TH DAY OF OUR YEAR OF GOING FORWARD.

It’s been the twilight of an out-going year. For those with eternity written in their hearts, this is a season of seeking the LORD in the deep and making fresh decisions that will guide us in the next set of days. Now, for true seekers of GOD, it’s not just about the season we find ourselves it’s about our walk and talk with GOD becoming better.

The Kingdom of GOD teaches that deep intimacy is not an option but a lifestyle to live after salvation. In our devotional today, we will begin with what took place in the beginning of creation.

But when God stepped down in Jesus and paid the price for our sin, He took away the wages of sin forever; making it possible to live a life that is not separated from God in time and eternity. That life is initiated by giving your life to Christ and sustained through deep intimacy with Him.

JUDAS LOST IT AND ENDED UP IN DAMNATION.

Ananias and Sapphira lost it and died even in Church. The disciples who departed from Jesus after hearing Him say they must internalize Him into their lives to be saved from eternal damnation, lost it. Some who gave their lives to Christ in the days of apostle Paul lost it and were eternally damned.

Addressing the possibility of losing one’s relationship with God after salvation, Paul wrote to his spiritual Son Timothy saying;

“This charge I commit to you, son Timothy, according to the prophecies previously made concerning you, that by them you may wage the good warfare, having faith and a good conscience, which some having rejected, concerning the faith have suffered shipwreck, of whom are Hymenaeus and Alexander, whom I delivered to Satan that they may learn not to blaspheme. 1 Timothy 1:18-20 NKJV

When a Christian return to his unsaved state, whatever he or she was doing before he or she repented will creep back into his or her life. He or she will either become comfortable in sin or develop the terrible habit of explaining it away.

When you become comfortable in sin or develop the terrible habit of justifying your actions or explaining things away, you have been separated from God already. If you die that way hell fire will be your home because the only Christians who will not go to hell when they die are those who remain constant friends of Jesus after salvation.

In waging warfare against the gates of hell therefore, we must fight not to return to our unsaved state. And the only way to do that is to embrace the call to deep intimacy with Jesus.

A separation from the life of God in this life is happens when we do not sustain our relationship with Jesus through deep intimacy with Him.

Sadly, many are not intimate with Jesus. They do not believe that they can be eternal separation from God after giving their lives to Christ hence living lives that are already separated from the life of God. This is a very dangerous development.

Born again is not a confession of faith but a life to live. It involves rejecting the sinner’s way of life and going further to sustain your decision through deep intimacy with Christ. Deep intimacy will keep you connected to the divine life.

If you are connected to the divine life in this life, hell will reject you in the next life. Hell fire is the home of only those who departed from this world without the life of God in them. It is a place where the eternally separated from God spends eternity. That is why if you remain a constant friend of Christ after salvation, you will not be found there when you die!

Our devotional text today says; “For God so loved the world that He gave His only begotten Son, that whoever believes in Him should not perish but have everlasting life.”

Believing in Jesus is more than a mental thing; it is a deep-seated spiritual thing that takes place in a man’s heart. A kind of believe that turns a sinner away from sin and Satan to serve the living God. It is not just a mental ascent but a spiritual conviction that results in conversion from sin to Christ.

When you are converted to Christ, your Old life will be done away with. You will begin to live a new life of righteousness. Deep intimacy will become your craving. That is why you find those who believe in Jesus hanging around Him all the time.

Don’t forget, deep intimacy is hanging around Jesus all the time. The early Church said;

“but we will give ourselves continually to prayer and to the ministry of the word.” Acts 6:4 NKJV

Will you make the same decision? Will you decide to separate yourself from all forms of distractions and give yourself to prayer and the ministry of the word?

LET THIS SCRIPTURE BE AN ADDITIONAL MEDITATION FOR TODAY;

“He gives power to the faint and weary, and to him who has no might He increases strength [causing it to multiply and making it to abound].”

“Even youths shall faint and be weary, and [selected] young men shall feebly stumble and fall exhausted;”

“But those who wait for the Lord [who expect, look for, and hope in Him] shall change and renew their strength and power; they shall lift their wings and mount up [close to God] as eagles [mount up to the sun]; they shall run and not be weary, they shall walk and not faint or become tired.” Isaiah 40:29-31 AMP