“So Daniel went in and asked the king to give him time, that he might tell the king the interpretation.

Then Daniel went to his house, and made the decision known to Hananiah, Mishael, and Azariah, his companions, that they might seek mercies from the God of heaven concerning this secret, so that Daniel and his companions might not perish with the rest of the wise men of Babylon.

Then the secret was revealed to Daniel in a night vision. So Daniel blessed the God of heaven.” Daniel 2:16-19 NKJV 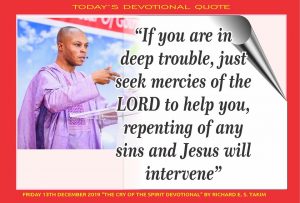 WELCOME TO THE 347th DAY OF OUR YEAR OF GOING FORWARD.

We give GOD the glory for giving us another day and for taking us closer to the end of the year. If there is anything that we need at this critical period, that thing is God’s mercies. Transition seasons are seasons where the elect needs mercies more than ever. As many as have been elected by God’s grace must press into and rely on His mercies to make it in life.

I grew up to discover that men in good standing with GOD are always on their knees seeking mercies from Him to grant them things in the Spirit. It is men who have fallen from God that are arrogant like the hypocrite in Luke 18.

Today I want to take us to a truth that was published sometimes ago about prophetic tombs. I pray that you find some refreshing truths in Jesus precious name.

Visiting natural tombs is not good because it keeps a man’s heart more attached to the dead and opens his life to death the spirit to strike. So, we are not talking about visiting a natural tomb. We are talking about a prophetic tomb, and it’s important that we unearth with it means so that we will not be misunderstood.

A PROPHETIC TOMB IS NOT A NATURAL TOMB!

A very simple definition of a tomb calls it “the last resting place.” A prophetic tomb is the last spiritual resting place of a man with an active walk and talk with GOD, especially when faced with life threatening situations.

Even you reading this have a prophetic tomb; that is if your walk and talk with God is active and progressive. It is the prophetic place you end up resting (in God) when you come under severe attacks of the enemy. So, it’s not a physical graveyard!

For Paul the apostle, his prophetic tomb was enough grace. He rested there at a time that a messenger of Satan was given to him to buffet him so that he will not be exalted above measure. The Bible says,

“Concerning this thing I pleaded with the Lord three times that it might depart from me. And He said to me, “My grace is sufficient for you, for My strength is made perfect in weakness.” Therefore most gladly I will rather boast in my infirmities, that the power of Christ may rest upon me. 2 Corinthians 12:7-10 NKJV

If you look at this scripture on the surface you will think that God was the one that sent the messenger of Satan to Paul, and like many have preached, to put pride under check or keep him humble. But like I said in one of our meetings, God does not commit revelation to proud people so that they will not blow up because of what they know! So, Paul was already humble, humble enough to bear the revelatory truths he was spreading.
In fact, you see that in 2 Corinthians 12 and other of his letters to the Churches.

So, when we say God sent that devil to keep him humble, we miss it. God will not give you abundance of revelation to spread about with one hand and then with the other sabotage your effort by sending a messenger of Satan to buffet you. That is not the GOD of the great commission!

The enemy was responsible, and God saved Paul when he sought Him in prayer. God saved him by making “sufficient grace Paul’s prophetic tomb or final resting place” in the battle with that messenger of Satan. And the result was amazing – multiplied strength was released into his life and ministry to keep him on his feet. That alone holds a deep lesson.

FRIEND, IF WE MAKE GOD’S SUFFICIENT GRACE OUR PROPHETIC TOMB, THE ATTACKS OF THE ENEMY WILL ALWAYS LEAVE US BETTER AND NOT BITTER. HALLELUJAH!

Our devotional text holds another revelation – it is the revelation of the prophetic tomb of Daniel – one of our Fathers. The Bible says the king has a dream and woke up without remembering it. Then he called his wise men, sorcerers, magician etc. to help him out. But they could not!

Then he became fierce and issued an order that if they cannot tell him the dream and its interpretation, he will consider it an exposure of a hidden but now known conspiracy against him. To him that will mean they have been telling him lies all along by the interpretations they have been giving to the previous dreams he had been having and sharing with them for interpretation.

If they were truly true, they should vindicate themselves by telling him the dream he just had and its interpretation. But the Bible says still they could not, and then he issued a command in response that they should all be executed. That was how the life of Daniel, who was working then as one of the wise men of Babylon due to his prophetic powers from Heaven came under threat.

The Bible made it clear that the execution began. I believe it began with those the king called to the palace to remind him his dream and give the interpretation. Then, the executioners started looking for others to kill!

Finally, they found Daniel and his friends also! But the Bible says Daniel answered the Chief executioner with Wisdom and requested that he see the King to see for time. The request was granted. Our devotional text says,

“So Daniel went in and asked the king to give him time, that he might tell the king the interpretation.

Then Daniel went to his house, and made the decision known to Hananiah, Mishael, and Azariah, his companions, that they might seek mercies from the God of heaven concerning this secret, so that Daniel and his companions might not perish with the rest of the wise men of Babylon. Then the secret was revealed to Daniel in a night vision. So Daniel blessed the God of heaven.”

If you look at this scripture, you will discover that the final resting place of Daniel (or his prophetic tomb) at a time when his life and that of others came under the threat of the sword of man was “Mercy.” The Bible says they sought Mercy of the LORD and that saved their lives. What the king was looking for was revealed to him in a night vision. Hallelujah!

IT’S IMPORTANT WE MAKE GOD’S MERCIES OUR PROPHETIC TOMB OR FINAL RESTING PLACE FOR THE REST OF OUR LIVES.

A people who will rest in His mercy in and out of season will never be blown away by the perils of life.

Daniel sought mercies of the LORD and God saved his life and that of others from the sword of the king. I don’t know what sword is pursuing you but one thing I know is this; if you will make God’s mercy your prophetic tomb or final resting place God will save you from it.

Yesterday we presented one way to make God’s mercy a final resting place or prophetic tomb. And today it’s being reinforced by our devotional text. A prayer life that is born out of deep repentance is it. Daniel prayed seeking God’s mercy and found it. If you will pray seeking His mercy, you will find it. That is the message of our devotional today!

LET THIS SCRIPTURE BE AN ADDITIONAL MEDITATION FOR YOU TODAY.

“God, you are my God; early will I seek you; My soul thirsts for You; My flesh longs for You In a dry and thirsty land where there is no water.

So I have looked for you in the sanctuary, to see your power and your glory. Because your lovingkindness is better than life, my lips shall praise you. Thus I will bless you while I live; I will lift up my hands in your name.

My soul shall be satisfied as with marrow and fatness, and my mouth shall praise you with joyful lips. When I remember you on my bed, I meditate on you in the night watches. Because you have been my help, therefore in the shadow of your wings I will rejoice.

My soul follows close behind you; your right hand upholds me.” Psalms 63:1-8 NKJV