“While thus occupied, as I journeyed to Damascus with authority and commission from the chief priests, at midday, O king, along the road I saw a light from heaven, brighter than the sun, shining around me and those who journeyed with me.

And when we all had fallen to the ground, I heard a voice speaking to me and saying in the Hebrew language, ‘Saul, Saul, why are you persecuting Me? It is hard for you to kick against the goads.’ So I said, ‘Who are You, Lord?’ And He said, ‘I am Jesus, whom you are persecuting.

I will deliver you from the Jewish people, as well as from the Gentiles, to whom I now send you, to open their eyes, in order to turn them from darkness to light, and from the power of Satan to God, that they may receive forgiveness of sins and an inheritance among those who are sanctified by faith in Me.’ Acts 26:12-18 NKJV 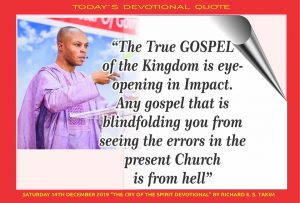 WELCOME TO THE 348th DAY OF OUR YEAR OF GOING FORWARD.

Today the LORD will be refreshing our minds with a piece of truth that was first published some years back. It was on spiritual blindness.

I grew up to discover that the greatest blindness on earth is not natural but spiritual blindness. That is why every genuine apostolic and prophetic mandate like the one in our devotional text carries the commissioning grace to open the spiritual eyes of both the church and the lost world.

From what I see today, the few physically blind people with sharp spiritual sights in the Church today are much better and brighter than the millions who have natural eyesight but are blind spiritually.

If you look at eternal things carefully, you will discover that the difference between people who will be in hell and those who will be in Heaven is in what they can see or cannot see spiritually. Many have never seen that hell is real and Jesus is the ONLY way.

Even some preachers are yet to see that. The reason we will go to Heaven or hell lies in our spiritual sight. It’s my prayer that GOD use today’s devotion to touch your spiritual sight again and again until it become very bright.

Spiritual blindness was the very reason why the Pharisees and Sadducees united just for one moment to crucify Jesus. Ironically, He was the messiah they all read about and were expecting. But when He finally came religion blindfolded them and they could not see or recognize.

Spiritual blindness can prevent a dedicated person from seeing the most important things of the kingdom of God sent his way. It can prevent a man from recognizing his day of divine visitation and what God sent to execute it. The Bible made it clear that spiritual blindness is over everyone with no personal relationship with Christ – be it a Muslim, Hindu, Judaist, or Christian.

NOW DON’T BE SURPRISED BECAUSE I INCLUDED CHRISTIANS IN THAT SENTENCE.

You can hardly hear the things of God taught in many church Circles today.

They talk the things of men, the things of this world, and the things that Satan does spicing their messages with scriptural quotations and leaving the people empty of GOD. That why everyone planted in such assemblies are basically spiritual vacuums waiting to be filled by the next attack of the devil!

But I have come to realize that one may be blind to anything in GOD but one thing he cannot afford to be blind to, is to be blind to the MERCIES OF GOD. Friend, it is too costly to be blind to divine mercy. And sometimes the cost is eternally unredeemable.

Blindness to divine mercy is simply not recognizing the mercy of God when it shows up.

Sometimes it shows up in a person God send to you. And the reason many do not recognize them is this kind of people usually come in packages we do not like. Other times God sends His mercy to us in form of acts of kindness, spouses we are married to, ministers of the gospel we need or even a word; it could be a word of rebuke or even judgment. That is an aspect of God’s mercy that our generation do not understand.

It is an act of mercy for God to raise a man or woman who will be revealing God’s severity to you calling you names to provoke you to holiness, and making it uncomfortable for you to live in sin. It’s an act of mercy for GOD to allow unpleasant things to flow into our lives so we can sit up straight in our walk and talk with Him.

But Like I said, our generation hates that. We reject the mercy of God especially when it comes in form of people by branding them with all kinds of unprintable names and weakening them consequently preventing them from doing their job.

ISRAEL SAW THIS DIMENSION OF DIVINE MERCY IN THEIR DAYS AND RESISTED IT TO THEIR DETRIMENT THE WAY WE ARE DOING TODAY.

“And the Lord God of their fathers sent warnings to them by His messengers, rising up early and sending them, because He had compassion on His people and on His dwelling place.

But they mocked the messengers of God, despised His words, and scoffed at His prophets, until the wrath of the Lord arose against His people, till there was no remedy.” 2 Chronicles 36:15-16 NKJV

It’s my prayer that this judgment will not be said of us on the final day.

Friend, Satan can let you see anything in the spirit realm but will never let you recognize God’s mercy when it shows up in your life. That is why the true gospel of the KINGDOM is an eye-opening gospel.

Our devotional text today tells us of the encounter Paul had on his way to Damascus that also became the release of God’s mantle upon his life.

He was spiritually blind before he had that encounter but woke up seeing spiritually and blind physically. God had to send one of His Sons to open his natural eyes having opened the spiritual eyes. The encounter of Paul with Christ shows us that true encounter with the Light of God, Jesus Christ Himself, is the only way to cure spiritual blindness. A major highlight of the text reads,

“And He said, ‘I am Jesus, whom you are persecuting. But rise and stand on your feet; for I have appeared to you for this purpose, to make you a minister and a witness both of the things which you have seen and of the things which I will yet reveal to you.

I will deliver you from the Jewish people, as well as from the Gentiles, to whom I now send you, to open their eyes, in order to turn them from darkness to light, and from the power of Satan to God, that they may receive forgiveness of sins and an inheritance among those who are sanctified by faith in Me.’”

THERE ARE OTHER THINGS WE CAN DIG FROM THE WORDS IN THIS HIGHLIGHT.

If you look at it carefully, you will realize that until the eyes of sinners are opened through an accurate presentation of the true gospel (not the enemy, depths of Satan and money spinning gospel on many mouths today), they cannot be certified saved by God. Yes, the Church could certify them saved and make them Church members and even appoint them into different positions, but God will not.

In God’s eyes, genuine encounter with the word will open the spiritual eyes of people, resulting in them turning from darkness to light and from the power of Satan to GOD. When they turn, forgiveness of sins and an inheritance among they that are sanctified will be released to them.

Meaning, there can be no spiritual blessings without us turning from sin and the power of Satan. And we cannot turn until our spiritual eyes are opened through the message of the cross – the gospel.

And from our devotional text it’s clear that many have not repented because they have not heard the true gospel. The Bible made it clear that if the true gospel is preached hearts will be prinked to turn to the LORD. Sadly, the gospel that is being preached today only prick people’s hearts to give and give and give money to their prophets and prophetess, and fight and fight all kinds of enemies.

IT IS REALLY A TERRIBLE GOSPEL!

It sounds so monetary and carnal in the mouth of preachers and most times demonic. But produce very sad ends in the lives of their listeners. It plagues them with spiritual blindness and prevents them from recognizing the true things of God.

May God keep you sensitive in the Spirit to GOD’s mercy whenever it shows up! AMEN!

“For the wrath of God is revealed from heaven against all ungodliness and unrighteousness of men, who suppress the truth in unrighteousness, because what may be known of God is manifest in them, for God has shown it to them.

For since the creation of the world His invisible attributes are clearly seen, being understood by the things that are made, even His eternal power and Godhead, so that they are without excuse, because, although they knew God, they did not glorify Him as God, nor were thankful, but became futile in their thoughts, and their foolish hearts were darkened.

Professing to be wise, they became fools, and changed the glory of the incorruptible God into an image made like corruptible man — and birds and four-footed animals and creeping things.

Therefore God also gave them up to uncleanness, in the lusts of their hearts, to dishonor their bodies among themselves, who exchanged the truth of God for the lie, and worshiped and served the creature rather than the Creator, who is blessed forever. Amen.

For this reason God gave them up to vile passions. For even their women exchanged the natural use for what is against nature.

Likewise also the men, leaving the natural use of the woman, burned in their lust for one another, men with men committing what is shameful, and receiving in themselves the penalty of their error which was due.

And even as they did not like to retain God in their knowledge, God gave them over to a debased mind, to do those things which are not fitting; being filled with all unrighteousness, sexual immorality, wickedness, covetousness, maliciousness; full of envy, murder, strife, deceit, evil-mindedness; they are whisperers, backbiters, haters of God, violent, proud, boasters, inventors of evil things, disobedient to parents,

undiscerning, untrustworthy, unloving, unforgiving, unmerciful; who, knowing the righteous judgment of God, that those who practice such things are deserving of death, not only do the same but also approve of those who practice them. Romans 1:18-32 NKJV