“So the Lord said to Cain, “Why are you angry? And why has your countenance fallen? If you do well, will you not be accepted? And if you do not do well, sin lies at the door. And its desire is for you, but you should rule over it.”

Now Cain talked with Abel his brother; and it came to pass, when they were in the field, that Cain rose up against Abel his brother and killed him. Then the Lord said to Cain, “Where is Abel your brother?”

He said, “I do not know. Am I my brother’s keeper?” And He said, “What have you done? The voice of your brother’s blood cries out to me from the ground.

So now you are cursed from the earth, which has opened its mouth to receive your brother’s blood from your hand. When you till the ground, it shall no longer yield its strength to you. A fugitive and a vagabond you shall be on the earth.”

And Cain said to the Lord, “My punishment is greater than I can bear! Genesis 4:6-13 NKJV 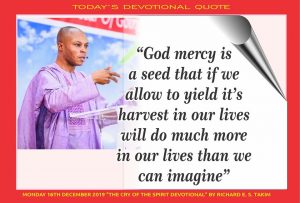 WELCOME TO THE 350th DAY OF OUR YEAR OF GOING FORWARD.

My heart is saddened by the prophetic ignorance of the church. Day unto day mankind gets closer and closer to the final consummation. Many are not aware of the imminent consummation of all things. Our personal needs consciousness has blinded us and limited our vision from seeing what we ought to be seeing about the final moments of the earth.

My heart is saddened by the Prophetic ignorance of the Church. We have become as blind as the world.

We grope in spiritual darkness like the lost and exception of the religious things we do and say, there is not much difference between us and them. We allow political winds to blow us like they do instead of the prophetic winds of the Spirit of truth. That is why we suffer what they suffer and are as eternally damned as them yet calling ourselves “born again.”

But the mercies of the LORD are from everlasting to everlasting. If we will make use of them and wake up from this slumber now that it is day, things will be different, because the night comes when no man can work. And that night is fast approaching! When it finally comes, mankind will know that they have been deceived not making Jesus Christ and eternal things their greatest attention in this life.

It’s been a season for stepping into another 365 days and mercies is important. We must make the mercies of God to go ahead of us. First, I want you to understand that God’s Mercy is a Seed! I have said this before and want to repeat it again. You may not agree with me, but God’s mercy is more of a seed than a need.

If Cain had known that God’s Mercy is a seed, he will have made a good use of it and raise a seed of righteousness on the face of the earth instead of the seed he raised. Many do not know that the people God regretted creating in Genesis Chapter 6 were offspring of Cain. If their ancestor Cain had made use of God’s mercy when it was available to him, they would have escaped God’s judgment.

GOD’S MERCY IS A SEED NOT NECESSARILY A NEED! IT HAS A LOT OF HARVEST FOR US WHICH WE MUST PURSUE.

Even the offspring of Cain that were caught up in the judgment of the flood of Noah received a deposit of God’s Mercy. But because they did not see it as a seed, they could not make use of it. Because they saw it as a need (or what they deserved like their father did), none of them made use of it to escape the judgment. If you do not see God’s mercy as a seed, you will never be saved from what GOD sent it to save you from.

At this point, let’s back track a little and look at the life of Cain again. Our devotional text presents the story of a man who sinned against God by violating offering principles.

When God rejected his offerings, it was an act of mercy. There are people God will reject their offerings and yet they will not even know. The pastor will accept it but GOD will reject it. But not Cain – God was so merciful on Him that He told him why His offering was rejected. But instead of making use of that he moved further into sin. He killed who God gave him to keep – His brother. The Bible says,

Now Cain talked with Abel his brother; and it came to pass, when they were in the field, that Cain rose up against Abel his brother and killed him. Then the Lord said to Cain, “Where is Abel your brother?”

He said, “I do not know. Am I my brother’s keeper?” And He said, “What have you done? The voice of your brother’s blood cries out to me from the ground.

A generation that do not make use of God’s mercy will move from sin to sin and from wickedness to wickedness, and sometimes it will be doing so on its knees asking God for mercy and forgiveness without making use of the mercy He has made available to repent from their sins.

When Cain was chastised by the LORD with a rejection of His offering, he did not make use of God’s mercy that manifested as a divine rebuke. He went ahead to kill his brother and the blood of his brother began to cry against him from the ground.

WHEN MERCY CAME AGAIN TO REVEAL TO HIM THE CONSEQUENCES OF HIS SINS, HIS RESPONSE BECAME MORE TERRIBLE.

He again did not make use of it to repent but rather did what many of us do! He said to God “My punishment is greater than I can bear!” In other words, he was saying to GOD “I deserve mercy irrespective of what I may have done!” That is the worst way to relate to GOD. We do not deserve mercy if there is no repentance from sin and wickedness!

Like earlier shared, Cain’s offspring will later grow up destroying all moral principles and filling the heart of GOD with so much pain, consequently bringing about the first global judgment of sin and wickedness.

Mercy is a seed not just a need! If GOD sow it in our lives and we do not allow a harvest of repentance to spring up from us, we will never escape what GOD seeded it into our lives to save us from.

Finally, I want to let us know that we are in the days of God’s mercy – that is as many of us that are alive. Very soon the curtain will close on each one of us and mercy will be over. We will come face to face with GOD to answer before HIM.

It’s my prayer that GOD will take us further individually and show us more things about His mercy being a seed so that we can allow it to bring forth the required harvest!

“But, beloved, do not forget this one thing, that with the Lord one day is as a thousand years, and a thousand years as one day. The Lord is not slack concerning His promise, as some count slackness, but is longsuffering toward us, not willing that any should perish but that all should come to repentance.

But the day of the Lord will come as a thief in the night, in which the heavens will pass away with a great noise, and the elements will melt with fervent heat; both the earth and the works that are in it will be burned up.

Therefore, since all these things will be dissolved, what manner of persons ought you to be in holy conduct and godliness, looking for and hastening the coming of the day of God, because of which the heavens will be dissolved, being on fire, and the elements will melt with fervent heat?

Nevertheless we, according to His promise, look for new heavens and a new earth in which righteousness dwells.” 2 Peter 3:8-13 NKJV