“And the Lord said to Moses, “When you go back to Egypt, see that you do all those wonders before Pharaoh which I have put in your hand. But I will harden his heart, so that he will not let the people go.

Then you shall say to Pharaoh, ‘Thus says the Lord:”Israel is My son, My firstborn. So I say to you, let My son go that he may serve Me. But if you refuse to let him go, indeed I will kill your son, your firstborn.”‘” Exodus 4:21-23 NKJV 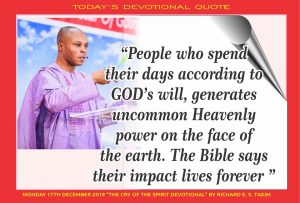 WELCOME TO THE 351st DAY OF OUR YEAR OF GOING FORWARD.

Repetition is key to establishment. I want to resound again a truth I published some time ago. You see “Heaven and earth shall pass away, but my word shall not pass away” says the LORD. A people who therefore build their hearts on the word of the LORD shall never pass away. The Bible made it clear that they will do the will of GOD and abide forever.

That is why men like Abraham, Isaac and Jacob are still very much alive (though dead). We hear them speak to us each time we read the Bible. They lived by the word of the LORD and did the will of GOD and now they are alive forever more. Indeed, any people who build their lives on the word of the LORD do not pass away! Jesus Himself certified them “alive” when He said God is the God of Abraham, Isaac and Jacob. And that He is the God of the living and not the Dead.

The word of the LORD is the manna that came down from Heaven which if we eat and respond to it positively, we abide forever. It carries what it takes to keep us connected to the Life of GOD in this life and the life to come. These men received and ate the word, today, after over 4000 years; they are still alive in the programs of GOD on earth.

One thing many do not know is that whatever gets planted into a man’s soul remains with him even after death. Death does not erased memories from the spirit and soul of a man. It does not erase the truths buried in that soul. It therefore cannot remove the word of the LORD the soul may have fed on before it dies. Dying in Christ only perfects the revelations in a man’s soul because He is going into a realm where what He fed on is tangible.

So, if you are spending your life in the word of the LORD you are getting your soul filled with things that will last forever.

With these opening comments I welcome you to another bright New Day from the LORD. It’s been our month of GOD’s Mercy, and Heaven has been faithful in unleashing one new truth or the other. Mercy is much more of a seed than a need! That was the word the LORD sent to us yesterday for chewing. I hope you are chewing it and getting what is chewed digested into your soul.

THE WAY THE PRODIGAL SON HANDLED THE MERCY OF HIS FATHER IS VERY REFORMATIVE.

First, it was the Father’s mercy that made Him not to deny the young man his request to have his own share of inheritance even while the father was still alive. Inheritance is shared after death not before.

So, when he ran into trouble, he remembered what he uses to see in his father’s house and decided to return (repent). He did not decide to return with the pride of the Pharisee or the “I deserve mercy” mentality. In fact, he was not even seeking the position of a son again. He knew he has lost it. He sought the position of a servant. The Bible says,

“But when he came to himself, he said, ‘How many of my father’s hired servants have bread enough and to spare, and I perish with hunger!

I will arise and go to my father, and will say to him, “Father, I have sinned against heaven and before you, and I am no longer worthy to be called your son. Make me like one of your hired servants.”‘ Luke 15:17-19 NKJV

Hidden in this story is the very position to take if you want to recover from anything in life – don’t forget we crash-land in life and become victims of poverty, diseases, struggles, pain, disappointment, divorce, and etc because of the Godless and Christ less decisions we do take in life. So if your life becomes unbearable, that is not the time to storm the gates of Heaven requesting for blessings. The prodigal Son took a “return position” that forced great mercy from the heart of the Father when his life crash-landed.

One of the golden things he did was not to request for what he lost. He lost his position as a son and recognized it; hence requesting for the position of a servant. That was what made Mercy to flow out to Him. Don’t forget, the story of the prodigal son is the story of GOD and us. Jesus told that story to show us, among other things, how to approach God in need. But many of us are not learning!

Whatever we may have lost to sin, ignorance and rebellion, is lost. We do not deserve another chance. You must come to terms with that for GOD to show you mercy. That was the revelation that the prodigal Son had – every faith position that drew great mercies from the heart of his father.

So, he went back to GOD with a desire to get, not what he lost. But God gave Him much more than He lost! The Bible made it clear that he returned to serve but God gave him his position back! The Bible says,

“And he arose and came to his father. But when he was still a great way off, his father saw him and had compassion, and ran and fell on his neck and kissed him. And the son said to him, ‘Father, I have sinned against heaven and in your sight, and am no longer worthy to be called your son.’

“But the father said to his servants, ‘Bring out the best robe and put it on him, and put a ring on his hand and sandals on his feet. And bring the fatted calf here and kill it, and let us eat and be merry; for this my son was dead and is alive again; he was lost and is found.’ And they began to be merry.” Luke 15:20-24 NKJV

LET ME REPEAT THE STORY OF A CONTEMPORARY PRODIGAL SON. I HAVE SHARED THIS SO MANY TIMES AND WANT TO REPEAT IT.

Many years ago, a preacher shared with us the story of a harlot that GOD transformed totally and gave a home. She was a professional harlot that had some complications during her harlotry days. The doctors had to cut off her womb to save her life. Then one day she met the LORD through the preaching of a child of GOD; it was an encounter that took her away from the streets into the hands of Christ.

She later joined a Church and said to herself, “I don’t deserve marriage or children after all I have done. I will serve the LORD unconditionally and die and never join those seeking him for marriage.” Truly, she kept to her word. She did what the prodigal son did. “Father I am no longer worthy to be called your Son. Make me one of your servants.”

She served for some time, and then a young man showed up asking her hand in marriage. She declined. Then another came, and she declined. Then they started disturbing her from all over. Then in a bid to be sending them away she will always tell them “I have no womb.”

But one day certain young came; this one refused to give up even after she had told him she had no womb. The man maintained that God said to him she was his wife. Quickly, he went to the pastor dragging the lady along.

To cut the long story short, they had a Holy Ghost filled wedding and after one month the lady took in. That was when the man started his own ‘trouble’ – good trouble of course.

MANY CHRISTIANS WILL RATHER ASK GOD FOR WHAT THEY LOST AND MAKE IT THEIR REASON FOR COMING TO HIM. THAT IS WHY THEY REMAIN WITHOUT HAVING IT.

They will be placing a demand through prayer fasting, giving, etc. for marriages, money, peace, prosperity, deliverance, healing, etc. instead of making service the reason for their repentance, but not this woman or the prodigal son. If you look at our devotional text this morning, you will realize that Israel was in Egypt for over 400 years and God raised Moses to bring them out. But His primary vision for bringing Israel out of Egypt was not to free them from Pharaoh but for them to serve Him.
A major highlight in the text says,

“Then you shall say to Pharaoh, ‘Thus says the Lord: “Israel is My son, My firstborn. So, I say to you, let My son go that he may serve Me. But if you refuse to let him go, indeed I will kill your son, your firstborn.”

What can we glean from here? Israel in Egypt represents mankind in slavery to sin and Satan. God saves us from the slavery of sin and Satan for us to “serve” Him, not for Him to “save” us whatever. In fact, wherever you see God saving people, it’s for them to serve Him. That is why when we make our needs the primary focus in our walk and talk with God, we key into Baal worship. But when we make service the primary focus, we become true worshipers. Giving God what to inhale in other to get His glory in return.

“And he arose and came to his father. But when he was still a great way off, his father saw him and had compassion, and ran and fell on his neck and kissed him. And the son said to him, ‘Father, I have sinned against heaven and in your sight, and am no longer worthy to be called your son.’

“But the father said to his servants, ‘Bring out the best robe and put it on him, and put a ring on his hand and sandals on his feet. And bring the fatted calf here and kill it, and let us eat and be merry; for this my son was dead and is alive again; he was lost and is found.’ And they began to be merry.” Luke 15:20-24 NKJV