“Behold, I send an Angel before you to keep you in the way and to bring you into the place which I have prepared.

Beware of Him and obey His voice; do not provoke Him, for He will not pardon your transgressions; for My name is in Him.
But if you indeed obey His voice and do all that I speak, then I will be an enemy to your enemies and an adversary to your adversaries.” Exodus 23:20-22 NKJV 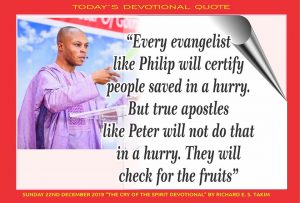 WELCOME TO THE 356th DAY OF OUR YEAR OF GOING FORWARD.

In other words, whenever God show mercy to a people, He will get them some quality spiritual food so that they will not go back to folly again. He will establish some “prophetic and apostolic food or feeding homes” and set great cooks (teaching prophets and apostles with access to the kitchen of His deep things) over them. Then He will send for the famish to come and take their seats, eating whatever He set until they grow too fat for the yokes of their enemy and unleash their individual destinies.

That is one of the critical truths Jesus was trying to reveal to the men of His generation when He shared the parable of the wedding feast! Like we shared yesterday, the greatest call on humanity is the call to come and be fed. Only those who obey that call will be saved.

It all begins with accepting Jesus Christ as LORD and savior and continues with taking a seat in His Spiritual Feeding Home (a strong prophetic and apostolic feeding center) until you become a temple for Him in the Spirit. You find this pattern in the early Church. The Bible says,

“Then those who gladly received his word were baptized; and that day about three thousand souls were added to them. And they continued steadfastly in the apostles’ doctrine and fellowship, in the breaking of bread, and in prayers.” Acts 2:41-42 NKJV

In other word, they took their seats in “God’s spiritual Food home” established for them shortly after surrendering to Jesus and continued steadfastly, feeding on the apostle’s doctrines through fellowship. This scripture shows us that anyone who gives his life to Christ without finding a “spiritual food center” or “an apostolic and prophetic food home” to sit and be fed spiritually will take it back as soon as the impact is over.

Few years back, as soon as I began to understand what is happening in the Church in Kenya, I was told of a pastor who went to a drinking spot to take some alcohol. When he became drunk, he began to boast of how much he is making through tithes and offerings. I marveled. Indeed, many of us in ministry are just there for the money.

That pastor is a man who has taken His life back from Christ, and that is if he ever gave it to him at first.

THE BIBLE FURTHER DESCRIBED THEM THIS WAY.

“They profess to know God, but in works they deny Him, being abominable, disobedient, and disqualified for every good work.” Titus 1:16 NKJV

We have different ways we take our lives back from Christ after giving it to him. That is when a life of Holiness will disappear from our walk with GOD. Everything sinful will become acceptable and treated with kids’ glove.

Most Christians live a life that shows that they have received Christ as LORD but are yet to receive Him as savior. Sadly, it is not accepting Jesus as savior that will take us to Heaven. But accepting Him as LORD!

You can accept Jesus as savior in a Crusade ground just as you can get married anywhere, but you cannot accept Him as LORD until you find a spiritual food house to sit and be fed, committing yourself unconditionally to Him until you are no more. Accepting Him as savior may require the repetition of what we call “the sinner’s prayer.” So, it can be done with the mouth but with or without the heart.

BUT ACCEPTING HIM AS LORD IS DEEPER

It requires a heart transformation resulting in a new life – a life of holiness and righteousness that keeps your spirit quickened towards God’s ways and will. Eve if you fall into sin, you do not sit there and call it your weakness and keep living in it – repeating your folly now and then. You quickly get up and return top the LORD in deep repentance like our father’s did.

In fact, whatever is not God’s will or God’s way you will not be comfortable with. So those who have accepted Jesus Christ as LORD cannot go into a marriage, business, Church, or live in a City and do anything outside God’s will or divine approval. The apostles knew this secret that was why they never certified anyone saved in a hurry.

They knew if one accepts Christ as savior without finding a spiritual food house to sit and be fed until Christ becomes His LORD, he is not established yet. One day he will go back to Egypt (a life of sin, crafted by Satan using the evil and corrupt systems of the world).

The purpose of strong apostolic teaching centers like the Cry of the Spirit Ministries therefore, is to greatly help those who have believed in Christ to develop a personal walk and talk with God through proper spiritual feeding, and come to a place on unconditional commitment to Christ. Only then will Jesus become their LORD!

There are no words to describe what your life will become when Jesus becomes your LORD! The first thing that will happen is, you will no longer see, talk, or come under any successful attacks of the enemy.

Personal fight against your enemies will disappear. Jesus will take over your battle and give you rest on every side. That is why one major thing you see in the life those who have made Jesus their savior but are yet to make Him their LORD is a constant battle against enemies.

LIKE I SHARED SOME TIME AGO, YOU WILL SEE RESTLESSNESS IN THEIR LIVES – ALWAYS IN CONSTANT FIGHT AGAINST ALL KINDS OF ENEMIES;
1. Perceived Enemies
2. Supposed Enemies
3. Fathom enemies
4. Enemies that are just a Mirage, and
5. Very few Real enemies

The first thing God does to you if you make Jesus your LORD is to give you rest on every side. That brings us to our devotional text. It says,

“Behold, I send an Angel before you to keep you in the way and to bring you into the place which I have prepared.
Beware of Him and obey His voice; do not provoke Him, for He will not pardon your transgressions; for My name is in Him.
But if you indeed obey His voice and do all that I speak, then I will be an enemy to your enemies and an adversary to your adversaries.”

The word angel means messenger. It was a messianic expression of the presence of the pre-incarnate Christ among them. In other words, Jesus Christ was the Angel God referred to. He was among the Israelites as a pillar of cloud by Day and a pillar of Fire by Night.

The Bible calls Him the messenger of the New Covenant. But today He is among us through the His Word and Spirit.
Making Him LORD involves obeying His word and Spirit and doing all that He tells us to do (as contain in His word and enabled by his Spirit). When that happens, the results will be Him becoming an enemy to our enemies and giving us rest from the days of adversity and slavery to sin, Satan and the evil and corrupt system of this world.

A lot of other things happen when Jesus becomes your LORD. But we cannot go into them in a devotional. But what is the message today? The message is simple. The greatest need of your life, therefore, is not marriage, money, freedom from generational curses or evil altars.

The greatest need of your life right now is a spiritual food house where you can be properly fed and brought to the faith position where Jesus will become your LORD and savior. When that happens, whatever you may be looking for will begin to look for you!

THIS SCRIPTURE CAN BE AN ADDITIONAL MEDITATION FOR YOU TODAY!

Why do you call Me, Lord, Lord, and do not [practice] what I tell you? For everyone who comes to Me and listens to My words [in order to heed their teaching] and does them, I will show you what he is like:

He is like a man building a house, who dug and went down deep and laid a foundation upon the rock; and when a flood arose, the torrent broke against that house and could not shake or move it, because it had been securely built or founded on a rock.

But he who merely hears and does not practice doing My words is like a man who built a house on the ground without a foundation, against which the torrent burst, and immediately it collapsed and fell, and the breaking and ruin of that house was great. Luke 6:46-49 AMP