“What is man that You are mindful of him, and the son of man that You visit him? For You have made him a little lower than the angels, and You have crowned him with glory and honor.” Psalm 8:4-5 NKJV 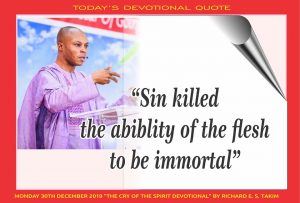 WELCOME TO THE 364th DAY OF OUR YEAR OF GOING FORWARD.

It looks unbelievable that we are in the second to the last day of 2019. With Just one day to go! This is amazing! God helped me to see all 365 days of the year. I do not know about you. But will you please join me in appreciating GOD for helping us to see all the days allocated to 2019.

Now, as we match towards 2020, we will need a lot of Heavenly backups to sail through successfully. If you think you can go through the year successfully without a heavy Heavenly back up, then you need to get the message I preached yesterday titled

WHAT YOU NEED TO CARRY INTO A NEW YEAR.

For instance, the big “G” lived in glory and was full of glory. The small “G” lived in a portal of glory that had multiple portals all over the Garden of Eden and was so full of God’s glory that it took him 930 years of living a fallen spiritual life to expel it. The day he expelled the last ounce of it, he died.

The big “G” is immortal, omnipotent, omnipresence, and omniscience and has millions of angels ministering to Him! Before the fall man was the small version of all these qualities. As Immortal he could not die. I knew this because the big “G” God said to him, “the day you eat of this you will surely die”. Man became immortal after the fall. Paul made it clear that both spiritual and natural death came into humanity through sin.

SIN KILLED THE ABILITY OF THE FLESH TO BE IMMORTAL.

As omnipotent, man was always powerful both spiritually and naturally. The word omnipotent simply means “all” or “always powerful.” God is all and always powerful. Man had a small version of this before the fall. He had dominion over everything God created – an ever potent and always powerful dominion. He never lost his power for a moment until sin came in. When sin came into the picture, what could not stand before him started chasing him. This is still being repeated today; things that were not designed to stand our presence have not ceased chasing mankind about.

As omniscience, man was all knowing in a small sense of it.
The word omniscience means “all knowing”. Man had a small version of this. This intelligence was displayed when he named the animals. Sometimes I wonder how he named the aquatics and other classes of animals. Obviously, GOD lived in Him and gave names to all the animals. God in him made him immortal. It was very sync. It made the naming ceremony supernatural.

The Bible says the naming was so profound and the names so accurate that God allowed every name he gave to remain so. The Bible says;

“And out of the ground the LORD God formed every beast of the field, and every fowl of the air; and brought them unto Adam to see what he would call them: and whatsoever Adam called every living creature, that was the name thereof.” (Genesis 2:19)

If you look at this scripture you will realize that no name was repeated. Each animal, insect, microorganism, sea creature, bird, etc. got a name. It is very clear that man was omniscience in nature – though hundred percent.

BUT THE FALL CHANGED EVERYTHING.

That brings us to the next thing God has in Heaven. The Bible is clear on the number of angels that ministers to HIM. John the beloved revealed that to us when he said;

“Then I looked, and I heard the voice of many angels around the throne, the living creatures, and the elders; and the number of them was ten thousand times ten thousand, and thousands of thousands,” Revelation 5:11

When he said ten thousand time ten thousand, it was not in the language of man. This is a reference to the millions of angels who minister to GOD within the throne room alone.

Now, man had small version of same angelic beings ministering to him. He enjoyed a small version of it before the fall. I believe, he could interact with these supernatural beings and commune with them the way we talk to a friend in the natural. They could also talk back to him and just have a chat with him about heavenly things which he was wired to know. I believe God visited Him, and angels ministered to him.

The good news about all these things is this; the death, burial, and resurrection of Jesus and subsequent outpouring of the Holy Ghost made it possible again for us to have a small version of what man had before the fall. That is what we will need in 2020.

OH, YES, WE WILL NEED STRONG ANGELIC MINISTRATION IN 2020. WE WILL NEED A VERSION OF WHAT ADAM HAD IN THE GARDEN IN OUR DAYS!

I have seen people who tasted these things even in our generation. Space and time will not allow me to be detailed, but the full truth will be taught in maybe in our NEW YEAR PROPHETIC ASSEMBLY coming up from the 9th to the 12th January 2020. I believe you will be with us.

Friend, as you pass through this day, make up your mind to plug back to the glory. Only then will the small versions of these divine attributes of God become visible in your life again. You can enjoy a small version of angelic ministry in this life. God assigned them to minister to redeemed men.

Amazingly, though the redeemed enjoy unlimited ministry from these beings, even the un-redeemed are not left out. God in His mercies make sure they enjoy a limited ministry of angels. It takes a relationship with Jesus, being in God’s will, and walking in obedience to enjoy an unlimited ministry of these supernatural creatures, and that is what God sent this word to activate in your life this day!

I pray for today that all through 2020, angels will minister to you. They will bear your Children up. They will shield you and yours from danger. They will open ancient doors to the supernatural to you and bring you miracles. They will open portals and descend upon you with blessing, and then ascend to heaven with your burdens on your life to the LORD, in Jesus precious name. AMEN!

LET THIS SCRIPTURE BE AN ADDITIONAL MINISTRATION FOR YOU TODAY

“Are they not all ministering spirits sent forth to minister for those who will inherit salvation?” Hebrew 1:14 NKJV