“Let God arise, let His enemies be scattered; let those also who hate Him flee before Him.” Psalm 68:1 NKJV

For You have made him a little lower than the angels, and You have crowned him with glory and honor.” Psalm 8:4-5 NKJV 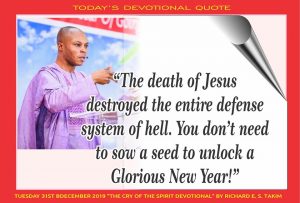 WELCOME TO THE 365th DAY OF OUR YEAR OF GOING FORWARD.

Can you believe this, it is the last day of the year 2019! I mean today is the last day of 2019. Wake up if you have not and give the LORD a big shout wherever you are reading this piece. He is worthy of that shout. Do not act cool, act crazy. It worth it. Many could not make it, but we are here.

Some are here but are lying as invalids in hospital death. Others are in terrible situations even paying for the air they breath in. Let us not shut our hearts down but remember these things and give the greatest Hallelujah to the KING of kings and LORD of lords, Jesus Christ our savior. He made the days and fashioned them to bless us. That was why none of the 365 days in 2019 broke us.

Yes, there were challenges but like Paul would put it, we were struck down but not destroyed, persecuted by terrible Church members, and aggrieved preachers, but not forsaken by the LORD. Always carrying about in our body the dying of the LORD Jesus that the life of God may be made manifest through us.

That is the best apostolic Christian life to leave on the face of the earth. But through it all, we saw the arm of the LORD strong and solidly behind us. It was indeed a year we went forward!

All through the year, we witnessed the LORD rising and our enemies scattering. There are spoils of war picked from the battles TO SHOW – the testimonies. If He had not fought for us, honestly, we would have been finished by our enemies. Today the bodies of some of us would have been in graves.

I want us to join David, the sweet psalmist of Israel, and say;

“Blessed be the LORD, who has not given us to be torn by their teeth. Our soul has escaped as a bird out of the snare of the trapper; the snare is broken, and we have escaped.”

NOW AS WE ALL PREPARE TO MIGRATE TO A NEW YEAR, THERE ARE TRUTHS TO KNOW!

We are dealing with the GOD who the Bible says inhabits eternity. His manifest presence is in time because of you and me but He lives in Eternity.

That tells me that in eternity there are no Cross Over nights. It is in time that we have Cross Overs. The truth is most of what we do with time have nothing to do with eternity!

That is why we must be Spirit led and Spirit enable so that we will not be cut off from the eternal GOD. You know you can easily loose track with one who lives in a different realm than yours if His Spirit is not there to guide.

“I will build my Church and the gates of hell will not prevail against it.” I call this proclamation “the Matthew 16:18 declaration.”

You see, when Jesus said He will build His church and that the gates of hell shall not prevail against it, He was simply revealing to us that hell will not be able to protect itself from the incursions of God’s Kingdom any longer. Before then it could protect itself.

That was why none could make Heaven or get saved until after the cross. It is the death, burial and resurrection of Jesus that stripped hell the ability to protect itself.

I am happy to inform you that one of the major blessings of redemption is the destruction of Hell’s Defense System (HDS). That is why you look so stupid in the realm of the spirit sowing a seed to unlock a better new year. Do not allow a preacher to make you gullible and scoop money out of your hands this night. I know many will be given lofty prophecies and made to make stupid vows. Simply put, tonight will be a great commercial night for many preachers.

They have even invited guest thieves to come help them steal by tricks from their members. They will use the seed faith principle to steal. But remember, you don’t sow a seed to unlock a glorious year because hell’s defense system have been destroyed.

Previously, it was impossible for the Kingdom of God to successfully carry out redemptive incursions on a large scale. That was why only 8 people were saved in the flood of Noah, and only Lot his two daughters and wife came out of the consummation of Sodom and Gomorrah despite the glaring approaching judgment.

At one time hell moved most Israelites to sexually defile themselves on their way to the Promised Land, leading to a great plague that killed 23,000 souls in the nation. Hell had been successfully protecting itself against the activities of the Kingdom of God by banking on the fall of man until redemption came.

BUT WHEN JESUS DIED, AND RESURRECTED THE ENTIRE DEFENSE SYSTEM OF HELL WAS DESTROYED.

The first-time souls were eternally saved on a large scale took place on the day of Pentecost. After that day, total salvation of men by the preaching of the gospel continued unabated. Hell could no longer defend itself. Hallelujah!

Redemption now depends on the Faith of men in the finished works of Jesus Christ not in the fight of hell. That is why, no matter how hell rages against you, if you say yes to God and believe His word for your life, you will prevail. Make 2020 a year of celebrating the victories of Jesus over hell as never before.

It is the last day of the year 2019, and I perceive a word from the LORD to speak to us. If you believe in the word – the word of the LORD for today, hell will be shifted, and the word will penetrate your world to expel any evil work you no longer co-operate with!

Yes, Satan only functions through our co-operation. That is why the Bible says, “Give no place to the devil” Sit down and check how much co operation you gave the devil this year and decide not to repeat the folly in 2020. If you look at the Church global, you will discover that many of us suffered a great deal this year because we gave the devil the greatest co operation he had ever received from us.

The level of spiritual attacks you face in life is a direct reflection of how much you are cooperating with the devil. Our devotional text today forms the bases for what God laid in my heart to speak into your life today.

When the nation of Israel would take a journey forward towards the promise land, Moses would stand before the people, look ahead where they were about going and declare “Let God arise, let His enemies be scattered; let those also who hate Him flee before Him” and that will be it!

Let me tell you a secret; the enemies of any people who are governed by God’s word, living in God’s will, doing things in God’s way, and following God’s paths are God’s enemies. It is because of that that I teach believers wherever I go not to privatize their enemies.

IF YOU PRIVATIZE YOUR ENEMY, YOU WILL NOT SEE THE HAND OF THE LORD RISE AGAINST THEM.

It is hell that sways people against us. And they do it, not because of us, but because of the God we serve and represent. So, when men rise against us, they are indeed rising against God. It is therefore a display of lack of prophetic wisdom to privatize our enemies.

When Moses “Let God arise, let His enemies be scattered”, he was putting God’s active presence ahead of the people. Through spirit led utterances, prophets of God can send God’s presence ahead of a people they are assigned to. If you believe I am assigned to you, then receive this word;

“Just as you will never see 2019 again after today, so will the evil works the enemy used this year to create in your life disappear.” “Whatever the enemy rolled into your life during the year, will roll away with the year!” “I declare divine elimination of all that do not glorify God in your life today, in Jesus precious name. Amen!!”

“A lion has roared! Who will not fear? The Lord God has spoken! Who can but prophesy?” Amos 3:8 NKJV

GOD bless you for being part of this mantle in 2019. Looking forward to feeding fat with more scriptural revelations and seeing the arm of the LORD perfecting His plans in your life! See you in our year of REJOICING!

“And they rose early in the morning, and went forth into the wilderness of Tekoa: and as they went forth, Jehoshaphat stood and said, Hear me, O Judah, and ye inhabitants of Jerusalem; Believe in the LORD your God, so shall ye be established; believe his prophets, so shall ye prosper.” 2 Chronicles 20:20 NKJV