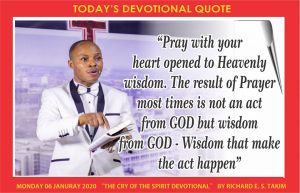 WELCOME TO THE 6TH DAY OF OUR YEAR OF REJOICING

The number six reminds me of the sixth feast of the LORD! The feats of atonement. The day of Atonement in God’s prophetic calendar will be preceded by the day of trumpet. We are right in the days of trumpets. The day of not sounding the shofar but sounding the gospel to our generation.

One major thing that we get when the prophetic word is released is sound or Heavenly wisdom! Yesterday we spoke more about operating in Heavenly wisdom on the January 2020 Edition of the monthly Cry of the Spirit to the nation, which the LORD has graciously allowed us to hold (actually I thought it was over last year, I never knew the LORD will still give us one more opportunity this year and maybe many more because His grace is sufficient).

As we shared in one of our shows on the MORNING CLOUD TV, this is the wisdom of GOD and it is the greatest need of mankind. You do not find it in any University. You can only find it in the mouth of the Holy Spirit using the Holy Scriptures or other means He chooses to use in speaking to us.

The Bible says through wisdom God founded the earth. An earth that was founded by wisdom needs a lot of wisdom from the one who founded it for one to live and thrive through it.

One major thing we must seek in a YEAR OF REJOICING with the whole of our hearts and embrace is the wisdom for running our lives. It takes wisdom from above to REJOICE.

The proceeds of Heavenly wisdom have a way of putting a permanent laughter on someone’s lips. Foolishness is the source of all kinds of sorrows. That is why the Bible says “wisdom is the principal thing. In all your getting, get wisdom and get understanding.”

THE PLACE OF WISDOM IN THE LIFE OF MAN IS HUGE.

I have come to discover that Prayer gets God working, but wisdom gets what He may have worked into our lives.

Prayer MAKE things happen in the invisible realm. But wisdom LET them happen in the natural realm. That is why there is a connection between prayer and wisdom. Wisdom comes when God make His words known to you most time in the place of prayer. The Bible says:

‘Call to Me, and I will answer you, and show you great and [a]mighty things, which you do not know.’ Jeremiah 33:3 NKJV

If you pray effectively it will make things happen. But without wisdom you will hinder what prayer has made happen in the spirit from happening in your life. That is why most prayerful people are less than dust and afflicted. They lack wisdom to allow the results of their prayers to speak in their lives!

Many people do not know that Heavenly wisdom is one major result we get in prayer. At all times we pray looking for the acts of GOD, but most times God’s acts are not the results prayer brings. A wisdom deposit that will make the act happen is most the result that prayer brings.

That brings us to an important part of this discourse.

THE TWO ASPECTS OF HEAVENLY WISDOM.

Heavenly wisdom has two aspects because of the two shades of human existance. Well, for those who may not know, there are two sides to the human life. We have the spiritual life and the natural life. Both needs wisdom from above to be managed properly.

Since the spiritual is the birthplace of the natural, I want you to understand that the application of God’s wisdom in solving spiritual problem is one of the keys that will help us in our year of REJOICING.

Our devotional text today holds one of the most ancient wisdom of God for dealing with spiritual problems. A major highlight from the text says, “If Satan casts out Satan, he is divided against himself. How then will his kingdom stand?”

Now we all know that the kingdom of Satan is not divided against itself. So, when we look at the text therefore, we can conclude that “Satan cannot cast out Satan.” In dealing with spiritual problems therefore, we must understand this wisdom from the Ancient of Days Himself.

LET ME SHARE WITH YOU A BIT ABOUT SPIRITUAL PROBLEMS.

All spiritual problems are traceable to Satan himself. Even when the hand of a man is involved, he is the power behind that hand. That is why I tell us to try not to hate people he moves to move against us. Though not easy, we must understand the warfare and still respond in love.

Except to execute correctional judgment, God is not usually the author of crisis. Satan is the source of all evil. I think even a Child knows that. In dealing with spiritual problems therefore, you must learn to cast out Satan because when he leaves and those, he may be using repent or change their mindset, all his works leaves with him.

For those who may not have heard me teach this, I want you to understand that the word “Satan” is not actually a name. It is a title. It means “opponent.”

It was a title given to him when he moved from Lucifer, a cherub angle that covered God’s throne with worship to becoming a major opponent of God’s will, ways, and word. That was why when Peter opposed Jesus and tried to discourage him from going to the cross to die for us, (obviously because he was ignorant) Jesus called him “Satan” or opponent.

BUT THE HEAVENLY WISDOM WE ARE UNCOVERING TODAY SAYS “SATAN CANNOT CAST OUT SATAN.”

That means if you we are opposing God’s will, word, or way in any way, we will lack the power to deal with Satan.

Since, he is an opponent of God’s will, word, and ways by nature, if we are not in synchronicity with God’s will, word, or way in any way, we will be operating at the same plane with him. And on that plane, “Satan cannot cast out Satan.” The most effective way to deal with the devil therefore is to be submissive and obedient to God’s will, ways, and word! The Bible says,

“Therefore submit to God. Resist the devil and he will flee from you. Draw near to God and He will draw near to you. Cleanse your hands, you sinners; and purify your hearts, you double-minded.” James 4:7-8 NKJV

I believe the message of today’s devotional is clear.

The Heavenly wisdom for dealing with all spiritual problems has been uncovered and it is simple. Obey God and live in total submission to His will, His ways, and His word. That will change everything in your life. It will seal up and accomplish all God wants to accomplish in our lives in our YEAR OF REJOICING!

I see this year becoming one of the best years of your life if you will just make up your mind to operate in the wisdom of obeying God and living in total submission to His will, His words, and His ways especially when it is not convenient.

God is calling on us this morning to His submissive Children!
People who are submissive to God will obey Him. They will walk in His ways and word. They will be sold out to His will. That will bring them into synchronicity in with the Spirit. When you are synchronized with the Holy Spirit, the devil will flee from you.

LET THIS SCRIPTURAL PASSAGE BE AN ADDITIONAL MEDITATION FOR YOU TODAY;

If you are willing and obedient, you shall eat the good of the land; But if you refuse and rebel, you shall be devoured by the sword”; for the mouth of the Lord has spoken.” Isaiah 1:18-20 NKJV