“For the time will come when they will not endure sound doctrine, but according to their own desires, because they have itching ears, they will heap up for themselves teachers; and they will turn their ears away from the truth, and be turned aside to fables.”

“But you be watchful in all things, endure afflictions, do the work of an evangelist, fulfill your ministry.” 2 Timothy 4:3-5 NKJV 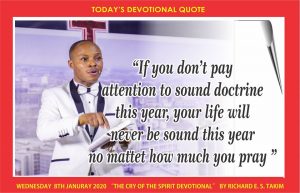 WELCOME TO THE 8TH DAY OF OUR YEAR OF REJOICING

I was watching the Bible Class yesterday after the show – the APOSTOLIC CHAT and was really blessed at the word of the LORD. I got so much word seeds to plant into my life and germinate more fruits in God’s kingdom.

Many years ago, I attended a Meeting organized by an apostolic voice from one of those nations in the Indian Oceans. He was visiting Nigeria for another time and I was privilege to be there. I got the difference between messages that are mare bread and messages that are seeds.

I left that place understanding the kind of message God has called me to preach on earth – not bread but seeds. Bread is for all, but seeds are for special breed because seeds are used in making bread. I discovered that bread gives us a one-time life, but seeds gives us a constant flow of life.

I have said before that what you eat will eventually eat you. You become the seed of God indeed if you feed on God’s word that come as seed to us. God’s word that comes as seed is a collection of Heavenly wisdom sent to help us produce sweat less accomplishments on earth.

You see, we have applied human wisdom enough in dealing with our problems; yet they are still there staring at us in the face. Now we need Heavenly wisdom!

THE RATE OF FOOLISHNESS IN THE HEARTS OF MANY CHRISTIANS TODAY IS DESTRUCTIVE.

You find a Christian lady due for marriage, yet it is not forthcoming. Then she will apply human wisdom to solve her problems by going nude on the streets and even coming nude to Church. Yet she remains single. The best result she will get is a team of men taking her to bed with no one committed to her; moving from sexual sin to sexual sin.

If your life will be sound this year, do not run it using human wisdom. Give heed to sound doctrine. Human wisdom is not designed to solve critical problems of life. It is always inadequate and counterproductive.

I have seen so many ladies wounded for applying the human wisdom of “getting a man to bed, and paying his bills thinking he will be yours forever.” Sadly, this breed think good sex will pin a man to them. But most now know it is a lie! Because even if he eventually marries them, he will dump them when he finds a sexier lady.

Heavenly wisdom tells us, God never designed marriage to be started on sexual feelings or satisfaction. God designed married to be founded on the stone of divine will and institute on the pattern of divine ways. That is why those who get married using Heavenly wisdom stay married after wards. But those who get married using human wisdom turn their marital lives into a bed of thorns.

It is important that we see what more the Bible says about this wisdom. What is considered the principal things should not be considered once and for all. It should be considered again and again.

THE BIBLE MADE IT CLEAR THAT HEAVENLY WISDOM IS ABOVE ALL OTHER KINDS OF WISDOM BECAUSE WHAT IS FROM ABOVE IS ABOVE ALL.

Heavenly wisdom is peaceable, gentle, willing to yield, full of mercy and good fruits, without partiality and without hypocrisy. It is pure and has righteousness as its fruits. Our devotional text today presents a major wisdom of God an apostolic father wrote and sent to his apostolic son.

He urged his son to keep to sound-doctrine and warned him that a time will come when people in church will no longer endure sound doctrine, but according to their carnal desire they will heap up teachers for themselves. That is why marriages are no longer sound and the faith of many defeated.

I guess we are right in the times this Apostolic Father spoke about nearly two thousand years ago. Preachers no longer teach sound doctrines. They preach inspirational messages that are neither reformative nor transformational.

They go inspirational because that is what the people want to hear, and that is what brings men of substance to the Church without putting Christ in them. If you look at what the so-called inspirational messages have produced today you will see an army of lesbians, guys, masturbators wrongly called “Sons and daughters of God.”

If God were gay, He would not haves sent angels to destroy Sodom and Gomorrah. If His true Children were lesbians, then Jesus would have not come to die and save us from our sins.
God is the Creator of Heaven and earth but not the Father of everyone on earth. Many in Church are fathered by Satan himself; hence leading ministries that promotes his works and eternally destroy people’s lives. Wherever the Holy Spirit is no longer the teacher other spirits will take over preachers and teach the people, sadly from the Bible.

THE NEED FOR SOUND DOCTRINE IS BEYOND MEASURE.

You cannot live a sound Christian life without receiving sound doctrine from sound preachers of God’s word. Part of the wisdom of God to apply your heart unto in OUR YEAR OF REJOICING is to go for sound doctrine. Go for what is true even if it is not working, because it will work at the end.

Do not allow the flesh or your physical needs determine who you listen to as a Child of God. Do not heap inspirational teachers for yourself. Allow the Holy Spirit to give you pastors after God’s heart. That is the wisdom of God! He said in His word;

“And I will give you shepherds according to My heart, who will feed you with knowledge and understanding.” Jeremiah 3:15

God is the one to give us pastors, spiritual fathers, Kingdom mentors. We are not the ones to choose. It is divine wisdom to be given by God Himself. When He gives you, the man will never lead you astray except he himself abandoned God and go astray.

The results of having God give you a spiritual guide, father, or mentor after His heart is enormous. The first is peace on every side, especially within your boundaries. Then prosperity will follow. Then you will become a dwelling place of God in the spirit. That is when you will begin to function like the ark did in the Old Testament. The Bible made this clear. It says;

“And I will give you shepherds according to My heart, who will feed you with knowledge and understanding.”

“Then it shall come to pass, when you are multiplied and increased in the land in those days,” says the Lord, “that they will say no more, ‘The ark of the covenant of the Lord.’ It shall not come to mind, nor shall they remember it, nor shall they visit it, nor shall it be made anymore.” Jeremiah 3:15-16NKJV

IF THE PASTOR YOU ARE UNDER WAS NOT TRULY GIVEN TO YOU BY GOD, IT WILL SHOW IN YOUR LIFE.

If circumstances gave you the man and you call it God, it will show in your life. You see, I have said it over and over that it is difficult to successfully falsify spiritual things, because we will be exposed. The fruits of our claims will speak the truth.

If you are under a spiritual leader God never gave you, you will never be able to function like the ark did in the Old Testament. The Bible says, they will say no more “the ark of the covenant of the Lord” when they sit under their God given shepherds because they will become the ark. Hallelujah!!

You remember what the ark did in the Old Testament? It was placed in the temple of Dagon and god fell. It became a plague in the camp of those who captured it.

When you become the ark of God in the Spirit, you will no longer pray against your enemies. Whatever or whoever captures you or yours will pay for it. God’s judgment will just be breaking out against them automatically.

If you are under a spiritual leader you gave to yourself, you may be enjoying it all now, but a time will come when you will begin to reap the consequences of not allowing God do His job. Instead of becoming the ark of God after a while, you will become a project – a prayer project.

People who are under spiritual assaults despite their so call spiritual fathers need to understand these things and make necessary adjustments; else they will never come into rest. The enemy will ever be with them.

MAKE THIS SCRIPTURAL PASSAGE AN ADDITIONAL MEDITATION TODAY AND GOD WILL BEGIN TO BUILD YOU;

And when the people of Ashdod arose early in the morning, there was Dagon, fallen on its face to the earth before the ark of the Lord. So they took Dagon and set it in its place again.

And when they arose early the next morning, there was Dagon, fallen on its face to the ground before the ark of the Lord. The head of Dagon and both the palms of its hands were broken off on the threshold; only Dagon’s torso was left of it.

Therefore neither the priests of Dagon nor any who come into Dagon’s house tread on the threshold of Dagon in Ashdod to this day.

But the hand of the Lord was heavy on the people of Ashdod, and He ravaged them and struck them with tumors, both Ashdod and its territory.

Therefore they sent the ark of God to Ekron. So it was, as the ark of God came to Ekron, that the Ekronites cried out, saying, “They have brought the ark of the God of Israel to us, to kill us and our people!”

So they sent and gathered together all the lords of the Philistines, and said, “Send away the ark of the God of Israel, and let it go back to its own place, so that it does not kill us and our people.” For there was a deadly destruction throughout all the city; the hand of God was very heavy there. And the men who did not die were stricken with the tumors, and the cry of the city went up to heaven. 1 Samuel 5:1-12 NKJV