“And the angel answered and said to her, “The Holy Spirit will come upon you, and the power of the Highest will overshadow you; therefore, also, that Holy One who is to be born will be called the Son of God.”

“Now indeed, Elizabeth your relative has also conceived a son in her old age; and this is now the sixth month for her who was called barren. For with God nothing will be impossible.”
“Then Mary said, “Behold the maidservant of the Lord! Let it be to me according to your word.” And the angel departed from her. Luke 1:35-38 NKJV 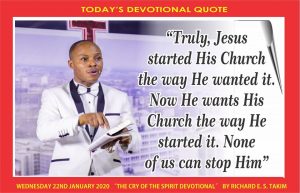 WELCOME TO THE 22nd DAY OF OUR YEAR OF REJOICING

The Cry of the Spirit Ministries is a spiritual family void of the tradition of religion. We are God’s people called out of darkness into His marvelous light. We are not a denomination so to speak. We are a chosen generation, a peculiar people, a holy nation, a royal priest hood positioned to show forth the praise of He who has called us out of darkness into God’s marvelous light.

Let me begin with this apostolic truth. You see, God did not create denominations. God created the Holy Nation. That was why when the Church started; it did not start as a denomination. It started as a move of God, driven by the Holy Ghost through a saved and sanctified people known as a royal priesthood, a Holy nation, a peculiar people. That is what every walk with the LORD Jesus will produce in men.

When our apostolic fathers started, they were not people who just sat in Church warming the seats weekly. They were proof producers, fighting every inch of the battle to execute the great commission without omission. There were no denominations like we have today!

Denominations were created by religious men when the custodians of the move disappeared under the pressure of hell. But the good news is, Jesus started His Church the way He wanted it, now He is bringing His church back to the way He started it. That is why Heaven is speaking to us these things.

We have a corporate destiny to fulfil as an end time church. Yes, each and every one of us in the present Church globally, has a divine destiny to fulfill. If we become more concern with that, we will not be found camping around religion and walling ourselves in some denominations.

We will find ourselves taking our place in destiny as God’s Holy nation on the face of the earth and converting the kingdoms of this world into that of God and of His Christ.

Every prophetic person knows that time has come for the body of Christ to move from other matters to matters of our eternal purpose or divine destiny. So, let us go further with the Holy Spirit even this morning to see what He has for us on divine destiny.

DIVINE DESTINY IS LIKE A SEED. WHERE YOU PLANT YOURSELF IS WHAT DETERMINES IF YOU WILL FULFILL IT OR NOT.

The word fulfill denotes things that have been pre-determined being made manifest, executed or performed.

Your divine destiny contains things that have been pre-determined by God to take place by you on the face of the earth. Where you plant yourself will determine if those things will be made manifest, executed, performed, or be made to happen or not.

For instance, it was pre-determined that a virgin will conceive without meeting a man to give birth to the messiah. It was a popular prophecy among the Jews. Mary became that virgin because of where she planted herself spiritually. The word ‘fulfill’ came to be in her life. She never needed to pray and fast to be that virgin. She was just in the right place spiritually, doing the right things, at the right time and the word came to pass in her life.

Concerning the Immaculate Conception as we can see in our devotional text, the angel said to Mary; “The Holy Spirit will come upon you, and the power of the Highest will overshadow you; therefore, also, that Holy One who is to be born will be called the Son of God.”

Hidden in this statement is an additional revelation of how divine destiny is fulfilled. It is fulfilled when the Holy Ghost comes upon us and the power of the Highest Overshadow us from time to time. That is why you must not plant yourself where this does not happen.

If you will fulfill your destiny, you must plant yourself where the Holy Ghost comes upon people and overshadow them with God’s power from time to time. And that must be done with a pure heart.

Don’t forget what the Bible says in the book of Zechariah. God was giving the same lesson to the prophet Zechariah to tell Zerubbabel whose divine destiny was to serve as the governor of a Jewish nation that had just returned from Babylonian captivity. It says:

So he answered and said to me: “This is the word of the Lord to Zerubbabel: ‘Not by might nor by power, but by My Spirit,’ Says the Lord of hosts.

‘Who are you, O great mountain? Before Zerubbabel you shall become a plain! And he shall bring forth the capstone with shouts of “Grace, grace to it!”‘” Zechariah 4:6-7NKJV

I like that word “Grace, grace.” If you are in the right place, God’s grace will be flowing constantly to you to enable you fulfill or execute your divine destiny.

GOD’S GRACE IS ACTUALLY GOD’S PRESENCE THAT MANIFEST AS GOD’S POWER AND PARDON.

It is the same thing as the power of the Highest overshadowing you the way it overshadowed Mary to fulfill her destiny. That is what we need on daily or constant bases to execute or fulfill our divine destiny.

Everyone who ever walked with God fulfill his or her divine destiny on the same terms. The Holy Ghost came upon them and the power of the Highest Overshadowed them from time to time and their destinies were fulfilled. Let’s highlight one of these men.

Let’s look at David; he came to national consciousness when he killed a Giant at 17. You will agree with me that he did not kill that giant by his own strength. It was not even his skill that brought the giant down but the power of God. Men of skill and deep experience in warfare could not stand the giant.

In fact, the king said to him, “You are not able to go against this Philistine to fight with him; for you are a youth, and he a man of war from his youth” (1 Samuel 17:33 NKJV). But David insisted on fighting the giant. His motivation was faith in the power of God not his own strength.

The King went further to demonstrate how he cared by kitting David with his own armor and battle regalia, but David could not even move with them because destiny is not designed to be fulfilled with man-made weapons or in man-made warfare kits. If it is destiny a man wants to fulfill, everything must be God made and God governed.

Finally, David moved against the giant, vulnerable at all points but with faith in the power of GOD. And divine destiny was fulfilled. Paul wrote in one of his letters to the Churches:

“And my speech and my preaching were not with persuasive words of human wisdom, but in demonstration of the Spirit and of power, that your faith should not be in the wisdom of men but in the power of God.” 1 Corinthians 2:4-6 NKJV

YOU CANNOT FULFILL YOUR DESTINY WITH YOUR FAITH IN THE WISDOM OF MEN.

Your faith must be totally buried in the power of God. You must be sold out to the Holy Ghost and the power of the Highest and depend on it at all points, even in your most vulnerable moments. That brings us again to the subject of where you need to plant yourself.

That is the message of today’s devotional!

MAKE THIS SCRIPTURE AN ADDITIONAL MEDITATION

“When he came to Lehi, the Philistines came shouting against him. Then the Spirit of the Lord came mightily upon him; and the ropes that were on his arms became like flax that is burned with fire, and his bonds broke loose from his hands.”

“ And so it was, when he had finished speaking, that he threw the jawbone from his hand, and called that place Ramath Lehi.” Judges 15:14-17 NKJV