“And David went out whithersoever Saul sent him, and behaved himself wisely: and Saul set him over the men of war, and he was accepted in the sight of all the people, and also in the sight of Saul’s servants.” 1 Samuel 18:5 KJV 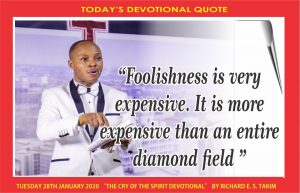 WELCOME TO THE 28th DAY OF OUR YEAR OF REJOICING

In the Kingdom of God, we are not concerned with securing our earthly lives at all cost. We are concerned with securing our divine destiny at all cost. And like we learned in the Bible Class yesterday, this life is passing away. There is a life that will not pass away ahead of the entire human race. We are to spend this life that is passing away preparing for the life that will not pass away.

The world does not welcome people who spend a life that is passing away solely preparing for the life that will not pass away. They make life unbearable for them. They also do not give a dam what the world thinks about them. They know there is a better thing waiting for them after this life. That was why the kingdom citizens that made up the early Church gave their backs to be beaten and their heads to be chopped off when they were confronted with the choice to deny Christ or die.

ONE ACT OF FOOLISHNESS CAN DESTROY AN ENTIRE PLAN OF GOD FOR YOUR LIFE. THAT IS HOW EXPENSIVE FOOLISHNESS IS!

I have said it before that Satan will first make people foolish before attacking them. He will first cloth them with blindness, ignorance and foolishness before moving against them.

If you will ever fulfill your destiny (irrespective of the divine backing you may be enjoying from Heaven) you must always learn to behave yourself wisely like David did. A major highlight in Our Devotional Text said “And David went out whither-soever Saul sent him, and behaved himself wisely: and Saul set him over the men of war…”

When a man of destiny behaves himself wisely, God will create more opportunities for him to unleash his destiny; God will move men to life him up above others. David was not set over the men of war until he behaved himself wisely in the conduct of the affairs of his destiny.

Not behaving ourselves wisely is one reason many of us are backward in life. We are full of foolish conducts, consequently hampering the release of divine destiny.

Like Samson did in his days, many of us in Church today will foolishly get ourselves stuck to the laps of a woman or the hands of a man who may be taking care of us but is bent at ruining our spiritual life and destroying our connectivity to God.

Others will foolishly speak a vulgar word to the face of people God has sent to lift them up – even holy men and women of God. Some others will get stuck to Churches, prophets and prophetesses who are doing nothing but shortchanging their divine destinies.

DAVID BEHAVED HIMSELF WISELY THAT WAS WHY EVEN WHEN HIS MENTOR BECAME HIS TORMENTOR GOD SUSTAINED HIM.

At one time he had the chance to kill the man, but he remembered that the man was anointed of the LORD. Though he was disgusted with what the man was doing to him, he respected the fact that it was God that anointed him king over Israel and did not touch him. That was wisdom from above.

That is why I tell people, if your pastor was truly anointed of God but now has derailed, it’s better to walk permanently away from him to the wilderness and spend the rest of your days there than to sit under him fighting, running him down in confidential whispers, and attacking him with the sword of your mouth.

Walking away and allowing God to be judge over whatever may have transpired between the two of you is the best way to handle the situation. That is one way we behave ourselves wisely under wicked Church leaders. David said to Saul;

…Why do you listen to the words of men who say, ‘Indeed David seeks your harm’?

Look, this day your eyes have seen that the Lord delivered you today into my hand in the cave, and someone urged me to kill you. But my eye spared you, and I said, ‘I will not stretch out my hand against my lord, for he is the Lord’s anointed.’

Let the Lord judge between you and me, and let the Lord avenge me on you. But my hand shall not be against you.

As the proverb of the ancients says, ‘Wickedness proceeds from the wicked.’ But my hand shall not be against you.

After whom has the king of Israel come out? Whom do you pursue? A dead dog? A flea? Therefore let the Lord be judge, and judge between you and me, and see and plead my case, and deliver me out of your hand.” 1 Samuel 24:9-15 NKJV

THE POSITION DAVID TOOK IN THIS SCRIPTURE IS THE SAME POSITION TO TAKE IF YOU ARE UNDER A MENTOR WHO HAVE BECOME A TORMENTOR.

But let me make something clear at this point; Most destiny mentors become destiny tormentors because of what they allow people to transmit into their ears about those God may have placed under them for upbringing. Its better to listen to the Spirit than people when it comes to dealing with men.

Let me also speak to those of us God has granted the privilege to father others into their destiny; if you are a leader reading this, the best way to behave yourself wisely in helping those the LORD may have has placed under you for fathering is to listen to the Holy Spirit in whatever you may be doing. The Spirit of GOD will always trigger an alarm in your heart if a bad seed is among those you are raising.

God will not allow us to raise bad seeds with the grace He has given us. They will always be spotted afar off and dismissed by His marvelous works. That is how to behave yourself wisely and commit to the Davids in your ministry.

Those in the position of David must separate from and not stick to or touch the LORD’s anointed that may have fallen from grace and has now become the chief tormentor of their destiny. They must do exactly what David did.

And those in the position of Saul must not entertain gossips about people the LORD placed under them for upgrading. They must do exactly what Saul could not do. Though not easy, but they must learn to love the people unconditionally and help to push them into their destiny differentiating between bad seeds and good seeds in the house.

I want you to spend this day asking the LORD to show you something you are doing foolishly that is killing you; ask the Holy Ghost to speak to you about you. What are you doing unwisely that may be responsible for your backwardness and sufferings?

Are you the type that loves meddling in other people’s matters? Are you living with another man’s wife or husband and expecting God to perfect the relationship and bless it with peace? God does not legalize or bless iniquity!

Show me your ways, O Lord; teach me your paths. Lead me in your truth and teach me, for you are the God of my salvation; On You I wait all the day.

Remember, O Lord, Your tender mercies and your loving kindnesses, for they are from of old. Do not remember the sins of my youth, nor my transgressions; according to your mercy remember me, for your goodness’ sake, O Lord.

Search me, O God, and know my heart; try me, and know my anxieties; and see if there is any wicked way in me, and lead me in the way everlasting. Psalms 139:23-24 NKJV