“But those who desire to be rich fall into temptation and a snare, and into many foolish and harmful lusts which drown men in destruction and perdition.”

“For the love of money is a root of all kinds of evil, for which some have strayed from the faith in their greediness, and pierced themselves through with many sorrows.” 1 Timothy 6:9-10 NKJV 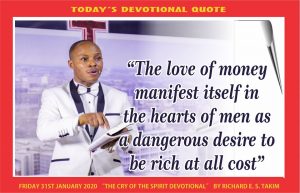 WELCOME TO THE 31st DAY OF OUR YEAR OF REJOICING

The greatest manifestation that creates uncommon joy in the heart of a Child of GOD is the actualizing of his destiny. That tells us that the YEAR OF REJOICING prophecy cannot manifest if the destiny of those God sent the word to is not fulfilled! That is why the happiest people in God’s kingdom are those who are serving their generation according to the will of GOD – people doing things that are getting their destinies fulfilled.

It’s therefore important that we seek for the knowledge of what our destinies needs to be fulfilled. That is the focus of today’s devotional. I pray that God will use this message in print to perfect His will for your life.

One major thing that our divine destinies will need to be fulfilled is Love for God. Yes, I said love for GOD and not love for money. Sadly, both loves look alike making it difficult for men to easily differentiate which is driving them.

The Love of money manifests itself in form of a dangerous desire to be rich. Many sons and daughters of destiny have fallen into piercing temptations, satanic snares, foolish and harmful lust and have been drown into destruction in this life and even perdition in the next life because of that.

Permit me to do a recap of what we have covered so far on this divine destiny flow. We began by outlining that a personal relationship with the LORD is the first thing a divine destiny needs to be fulfilled. Then we went further to share that spending countless hours with Him or building a healthy devotional habit is the second.

Then the Holy Ghost kindled our spirits to know that behaving wisely is the third ingredient our destiny will need to be fulfilled. He made it clear to us that David behaved himself wisely on matters of his divine destiny even in very provocative situations, that was why he started and finished both strong and well.

One way to behave ourselves wisely today (as we learnt) is not to sow to please our flesh – not to take a decision to feed our pride or ego, lust or carnal cravings etc. If we sow to the flesh, we shall of the flesh reap corruption and stall the release of our destiny.

THE NEXT INGREDIENT OUR DIVINE DESTINY WILL NEED TO BE FULFILLED IS A GENUINE LOVE FOR GOD.

Love for God has been the driving force of people of Divine Destiny from age to age. But our generation has replaced that with love for money. And because the two passions look alike it has become very difficult to tell the difference.

Jesus indeed placed God and money on the same platform in the hearts of men when He said in Matthew 6: 24 that we cannot serve God and mammon (god of riches and material acquisition).

So many people today, especially we preachers, who claim to love God or to be in ministry for the salvation of souls are lying. A large percentage of us are in ministry today because of our love for money. That is why the more we get it the more we loose God.

Have you realized that when most preachers started, they were powerfully flowing under the glory? God stuck His shadow to their lives. But now that they have succeeded and are flying from nation to nation with so much money to spare, the glory has departed. They now struggle with bottles of Oil and faith preaching with no more moves of the Holy Ghost to show.

When you see a Child of God or a preacher getting more of money and losing more of God’s manifest glory and presence, his love for God has been replaced with an internal crave and love for money. If the desire to be rich is the reason you run after God, you will end the way Judas Iscariot ended – a son of perdition.

God will first send destruction to warn you but if you remain deaf and blind, you will end in perdition when you die. That is why a major highlight in our devotional text for today said; “But those who desire to be rich fall into temptation and a snare, and into many foolish and harmful lusts which drown men in destruction and perdition.”

The easiest way to be drawn into destruction and perdition like Judas Iscariot is to pursue a divine destiny with a desire to be rich. That is why Churches have become money making machines and every prayer for miracles attached to special financial seeds. As a result, many in our Church generation have grown fat and rich in the unrighteous mammon but very poor in the true riches of the Kingdom.

John the beloved accurately captured the prophetic portrait of our Church generation when he wrote saying;

“Because you say,’I am rich, have become wealthy, and have need of nothing’ — and do not know that you are wretched, miserable, poor, blind, and naked — Revelation 3:17 NKJV

Look at the many Churches and ministries we call rich and mega, they are producing a followership that is wretched in the things of God, miserable, poor, blind and naked. There is no fullness of God’s presence on display in their lives.

Whenever the pursuit of divine destiny becomes driven by the love of money or desire to be rich, destiny people will become an assembly of Satan or a gate of hell on the face of the earth, fighting even the very purposes of God they claim to be pursuing; preaching heresies, practicing prophetic and Charismatic witchcraft and trying to prevail against the true Church of Jesus Christ they claim to be part of.

HE SPOKE THROUGH JOHN THE BELOVED SAYING:

“Because you have kept My command to persevere, I also will keep you from the hour of trial which shall come upon the whole world, to test those who dwell on the earth.” Revelation 3:9-10 NKJV

I believe this is a present word for those who are keeping the word of the LORD, who are not driven by a desire to be rich in their pursuit of destiny. God is saying to you this morning, I will keep you from the hour of trial that shall come to test those who dwell on the earth.

Above all, you will smile in eternity. The troubles you may have faced in time for keeping to His word and allowing only His love drive you in the release of divine destiny will be rewarded.

I am persuaded that if you make today’s devotional your meditation and allow the Holy Ghost to unveil more things to you, something destructive will be extracted out of your desire to pursue destiny. Many who have lost the glory of God in Church now have the powers of the evil one in their lives. They use it to dish out miracles to the naïve.

That is why their prayers for people is usually based on giving money or sowing seed, using salt, sand or mustard seeds to pray; asking people to drink oil etc. They have pursued and acquired money but lost the glory of God.
May that not be said of you or anyone in the true Church!

“But you, O man of God, flee these things and pursue righteousness, godliness, faith, love, patience, gentleness.”
“Fight the good fight of faith, lay hold on eternal life, to which you were also called and have confessed the good confession in the presence of many witnesses.”

“I urge you in the sight of God who gives life to all things, and before Christ Jesus who witnessed the good confession before Pontius Pilate, that you keep this commandment without spot, blameless until our Lord Jesus Christ’s appearing,

which He will manifest in His own time, He who is the blessed and only Potentate, the King of kings and Lord of lords, who alone has immortality, dwelling in unapproachable light, whom no man has seen or can see, to whom be honor and everlasting power. Amen.” 1 Timothy 6:11-16 NKJV