“And He said to them, “You are those who justify yourselves before men, but God knows your hearts. For what is highly esteemed among men is an abomination in the sight of God.” Luke 16:15 NKJV 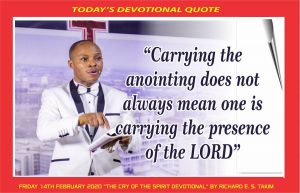 WELCOME TO THE 45th DAY OF OUR YEAR OF REJOICING

Welcome to another weekend that the LORD has given us. I want to say, thank GOD that the Rapture or the consummation of all things has not taken place yet. Obviously, many would have been lost forever.

A new day or week is usually an opportunity given to man to amend his ways, get closer to God, and be more intimate with Jesus Christ. It is an opportunity to prepare for the next life while living the present life. I have repeated this over and over and will not stop reminding my generation of that.

When I take a spiritual gaze at the Church today and what we are doing with the “valentine thing,” the reality of how far even spiritual leaders have been separated from God dawn on me. And because they still carry the anointing the shallow minded cannot discern that they are separated from God.

Sometimes having the anointing does not mean one is carrying the manifest presence of the LORD. The last thing Heaven want to see on earth are people separated from God. Sadly, we don’t just have church members who are totally alienated from GOD, we have church leaders who are separated.

God never created man to be separated from Him. That is why He came down as Jesus Christ to die the death of the Cross and redeem man back to Himself!

It’s very difficult to discover that a preacher has been separated from God. You will never know if you yourself are separated.

IT TAKES PEOPLE WHO ARE NOT ALIENATED FROM GOD TO DISCERN THOSE WHO ARE.

The gifts and callings of God are without repentance, so when a man of God becomes separated from God in spirit, he will loose “the glory” but not “the anointing.” He will become worldly. He will begin to celebrate what the world celebrates, and exalt what they exalt, basically to keep his Church growing and himself smiling to the bank even when the members are smiling to hell.

The world has become Churchy and the Church worldly. There is an exchange in the spirit, and this is hurting the heart of the three that bears witness in Heaven – the Godhead. The prophetic ear is picking and expressing it on earth through the prophetic finger, though many are not seeing or sensing it.

When a spiritual leader is not in the know of what is going on in the Heart of the Godhead, He will not see divine sense in what is expressed by the prophetic finger. The same is applicable to those who are led by them.

But why has it become so exalted among men? Even in the Church?

Valentine Day today has become a day used for the worship of the goddess of sexual love. I saw so many funny things on the social media even from Church leaders about Valentine.
God help the Church!

Sexual love was a corrupted love promoted in Bible days by the sex goddess, Asherah. Today, there is a second coming of this spirit and Valentine Day presents it with the opportunity to defy more souls and deepen their eternal damnation.

The truth is love is not sex neither is sex love. Ask the married who are going through hard time in their marriages. Even during conflict, the women still get pregnant. Jacob hated Leah but he got her pregnant over 5 times.

SO, LOVE IS NOT SEX NEITHER IS SEX A TRUE EXPRESSION OF LOVE.

The philosophy that says sex is an expression of love is promoted by worshipers of the sex goddess who doubles as its messengers on the face of the earth. They are the apostles of the filth of the Valentine Day. Even in Church they promote the filth and use it to stimulate sexual desire in God’s children.
They even advise couples to use it to lubricate their marriages.

You may not like this but “if you need a valentine day to keep your marriage blissful then you are married to a dog-man or dog-woman not a Godly man or woman.” I said that years ago and need to repeat it here and now. That marriage will soon pack because marriage is not for dogs but Godly people.

As you prepare for the day, do not forget to keep watch over your soul. Do not trade it for any moment of carnal pleasure. What will be deposited in it may not come out for years. If there is any time the Saints need to be urged to keep close watch over their souls, it is now!

I urge you to keep watch over your soul. Stay true to God! And as you daily activities today, I pray the LORD teach you further in Jesus precious name.

LET THIS SCRIPTURE BE AN ADDITIONAL MEDITATION FOR THE DAY

“Don’t let people call you a traitor for staying true to God. Don’t you panic as so many of your neighbors are doing when they think of Syria and Israel attacking you. Don’t fear anything except the Lord of the armies of heaven! If you fear him, you need fear nothing else.” Isaiah 8:12-13 TLB