If Satan casts out Satan, he is divided against himself. How then will his kingdom stand?” Matthew 12:25-27 NKJV 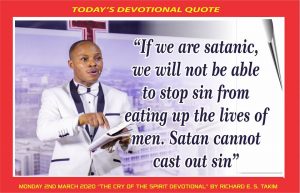 WELCOME TO THE 62nd DAY OF OUR YEAR OF REJOICING

The Cry of the Spirit Yesterday on Morning Cloud and Citizen Televisions respectively was piercing. The frequency that the word of the LORD came was unusual. I guess whenever I am provoked and leave the earth completely. Maybe such provocations are necessary for spiritual ascensions.

Should I say “LORD, let them keep bringing it on?”

Honestly, I don’t know and will never like such things to be happening. But the Bible says we have this treasure in earthen vessels. Sometimes the vessel needs to be squeezed or crushed in spirit for the treasure in it to come out. And there is nothing he or she can do about it.

At the beginning of months like this, people do come out with a lot of prophecies for the month. As one God has shown mercy to operate in the prophetic, I can tell when people are speaking outside grace and truth. Every child of God should be able to operate that in a wicked Church world like the one we find ourselves.

Recently I was thinking what the purpose of being on social media is for some of us preachers. Many of us are just looking for likes and comments. We say prayers outside the spirit of Grace and record videos just to look out for the likes. That is not ministry but a show up!

Do you think If Elijah, Jeremiah, Isaiah, and the rest of the fiery prophets of God were in our days, they would have gotten likes in some of their prophecies? Even comments? I think the only comments they would have gotten would have been comments of accusations, defamation and slander. Nothing else. That is why I don’t bother myself with the negative comments people make in reaction to my social media post or video. I just delete them to keep my wall clean and move on.

I guess Elijah would have done the same, or maybe call down fire to consume them …hahaha!

It’s sad that we allow self to hinder us from telling ourselves the truth. A lot do not want to hear the truth. That is why very few are free. Most are bound to all kinds of devils and vices. Some to cords that will never let God’s plans for their live to be fulfilled.

SADLY, THEY WILL MEET IT AND REGRET FOR NOT LISTENING WHEN WE ALL CROSS TO THE OTHER SIDE OF LIFE!

The Bible says, “say unto the righteous it shall be well with you.” When we look at everyone and tell them it shall be well with you, especially the sinner who is speeding to hell and the so-called Christian living a double life, we are not speaking from grace and truth. We may be speaking from a grace that has no truth in it. And such grace is grass!

Our departure from the realm of glory has not really helped us.

It has turned us into anything but Christ. One major thing it did, apart from raising a self-seeking generation that look for likes and comments on face book instead of speaking the truth, is the injection of enemy consciousness through the exaggeration of the activities of our enemies.

Today most of us talk more of the enemy and less of God. And we do that in the house of a jealous God! I guess we do not really know that we provoke God to jealousy each time we do that. A woman cannot be talking about another man in the presence of her husband and no get booted out of that house. Except she is the one that married the man, she will loose her home.

Yes, the blood of Jesus, like I started in our devotional yesterday, will never allow “our enemies to have the last laugh” in our lives. We forget this Biblical position and spend our time over stating and exaggerating the activities of the enemy instead of the activities of God, consequently polluting our Christian faith with anti-Christ phenomena like hate and lack of compassion.

Hate and lack of compassion has sent many Christians to hell and is preparing many towards the same destination because Jesus hinged the Father’s forgiveness on our capacity to walk in love and forgive others also.

Meaning, if we die speaking in tongues, praying all mysteries, sacrificing ourselves, substance and all to the kingdom but not forgiving those who sin against us or walking in love, we will not make Heaven because the Father will not forgive our sins when we get there.

JESUS SAYS WE WILL BE FORGIVEN AS WE FORGIVE THOSE WHO TRESPASS AGAINST US!

Our devotional text this morning made a profound revelation. It says “

This statement was not made by a mere man. It was made by the creator of the Universe Himself who manifested as man. Wisdom therefore demands that we give it double attention and glean some truths from it.

The first truth we can glean from it is this; “Satan cannot cast out Satan, because His kingdom cannot be divided against itself.” Hidden in this truth is the reason many in Church are not receiving freedom from sickness, poverty, and all forms of satanic oppression.

If we are satanic in any form, we will never be delivered from his works no matter how we pray, fast, give or are prayed for.

Satanism is not just the dark practices of the devil we all know; it is allowing any of Satan’s attributes to live in you as a Christian. It is also being satanic in your relationship with others.

You see, the difference between the Kingdom of God and that of Satan is the presence of compassion and unconditional love in God’s Kingdom, especially at the instance of repentance, and the absence of the same thing in Satan’s kingdom. Every agent of the devil will tell you there is no love and forgiveness in Satan’s kingdom, even for those who repent.

HE RULES WITH SUCH A STRONG HAND THAT NO ONE GOES UNPUNISHED.

Yet, that is what most of us Christians do to our fellow men. Like Satan, we do not allow the compassion, mercy, kindness, love, and truth of Christ to flow through us to a sick and dying world around us. That is Satanism in its mildest form. And since you are satanic in nature, there will be no way his activities can be stopped in your life!

Mercy, truth, love, hope, and compassion can only be found in God’s Kingdom. That is why we cannot claim to be in faith as believers if these things do not exist in our lives.

Walking in love, mercy, and forgiveness is a weapon of mass destruction in God’s Kingdom. Paul wrote to the Church at Corinth saying;

“Though I speak with the tongues of men and of angels, but have not love, I have become sounding brass or a clanging cymbal.

And though I have the gift of prophecy, and understand all mysteries and all knowledge, and though I have all faith, so that I could remove mountains, but have not love, I am nothing.

And though I bestow all my goods to feed the poor, and though I give my body to be burned, but have not love, it profits me nothing.” 1 Corinthians 13:1-3 NKJV

It was love that made Stephen not to request that God killed those who stoned him to death before he died. He rather asked that they be forgiven. The result was the salvation of Saul, who later became Paul the Apostle of grace.

If Stephen had asked that his enemies fall and die, perhaps there would have been no Paul because he presided over Stephen’s death, and without Paul we would have not known what Christianity is. That explains the number of people who have hindered from coming into the Kingdom and the value we have hindered God from adding into our lives by our “fall down and die” spirit.

Under the Old covenant fire could fall to destroy the enemy but under the New, Jesus said we have not come to destroy men’s lives but to save them. If your Christianity is busy calling on God to destroy men’s life, you are not under grace. Grace does not destroy!

We can go on and on and on. But let me stop here. This is a devotional and not a book!

Let’s make this day our day of love. Let’s call those we have not forgiven and forgive them. Let’s withdraw the consequences of their sins like Christ withdrew ours. Let’s also ask for forgiveness from those we offend and refuse to plead for forgiveness. Let’s humbly seek for their mercy as well.

Let’s make the rest of our lives a season of loving even those who do not deserve it.

That is the message of today’s devotional.

Love suffers long. Love is kind. Love is not self-seeking. It does not envy. It does not parade itself. It is not puffed up! Love bears all things! I promise you, your life will be better if LOVE and Compassion becomes your motivation for living!
Have a glorious month !!!!!!!!!!!