“The enemy shall not outwit him, Nor the son of wickedness afflict him. I will beat down his foes before his face, and plague those who hate him.” Psalms 89:22-23 NKJV 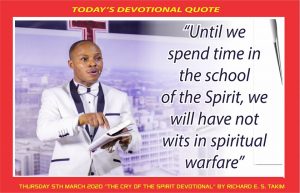 WELCOME TO THE 65th DAY OF OUR YEAR OF REJOICING

I would like to call today the grace day of the month of March – the 5th day. Five is the number of grace. In our devotional today we will be highlighting some truths on spiritual warfare.

However, if he outwits you in battle, you will be in trouble because spiritual warfare is a battle of wits. When we say wits, we are referring to intelligence, common sense, understanding, and the use of the head or mind to make way.

For instance, he will use teachings of grace that allows sin to reign supreme in your life just to keep you filthy enough to be perpetually oppressed, sick, and depressed by his demons.
He knows his activities only prevail where the glory does not dwell, and the glory and sin do not coexist. So, he may even keep you anointed, but in sin so that he stays ever with you despite your anointing.

THAT IS SUPERIOR INTELLIGENCE.

Sadly, many do not know that one can be anointed and still live in sin, consequently, taking the presence of the anointing as divine approval of their sinful lifestyles.

In fact, the enemy will use Romans 8:1-2 to get a better of them by telling them “there is now no condemnation to those who are in Christ Jesus” without adding “who walk not after the flesh but after the Spirit” to keep them moving from sin to sin. His superior intelligence will get a better of them by deceiving them to quote that scripture halfway.

Whenever you see a Christian or preacher quoting this scripture halfway, you have seen a man or woman living in secret sins. A pastor once used this half-quoted scripture to keep a lady he was not married to in sexual sin for a long time. We have discovered that all the grace preachers who quote the portion of Romans 8:1-2 that suits them and leave the rest are living in sin.

The enemy has outwitted them in battle!

But our devotional text this morning says

“The enemy shall not outwit him, Nor the son of wickedness afflict him. I will beat down his foes before his face, and plague those who hate him.” Hallelujah!

Historically, this was a prophetic blessing God placed on David because of the wars the young man was called to fight. It was placed on him the Day Samuel visited his home. God began by making sure that the enemy does not outwit David in battle, because if David is outwitted in battle, the sons of wickedness will afflict him.

WHAT CAN WE GLEAN FROM THIS?

If we allow the enemy to outwit us in the battles of life, it will open the door for every son of wickedness to afflict us.

That is why only those who know their God shall be strong and do exploits. But those who do not know him shall be weak and exploited. Those who are foolish shall be exploited. Faith is not foolishness. Faith is a product of divine wits that is why it comes by hearing and seeing from the all wise God, whose wisdom is foolishness to men.

If you therefore have no wit in the Spirit, but claim you are in faith, you are lying. Men of faith are men of wits. Abraham was a man of faith; he was a man of wits. With 318 men he defeated thousands of well-armed and well-trained soldiers in the battle of five kings.

When his little nephew Lot became a thing of concern to him, he wisely parted from him without rancor. When the same was in trouble, he armed his trained men and went for his rescue. It takes wits to love even your enemies and those who rewarded you evil for good.

Here is a special prayer – “LORD, give us wits for battle. Give us wits for our marriages, finances, families, ministries, and spiritual lives to come alive. Give us wits to overcome temptation, go successfully through trials, stand the storms of life, turn the armies of the enemy to flight, and become strong in faith. LORD, we may be denied anything in life, please do not allow us to be denied divine wits.”

As you embrace this day, may this prayer become your prayer as well, in Jesus precious name! AMEN!!

“I have found My servant David; with My holy oil I have anointed him, with whom My hand shall be established; also My arm shall strengthen him.

The enemy shall not outwit him, nor the son of wickedness afflict him. I will beat down his foes before his face, and plague those who hate him.

“But My faithfulness and My mercy shall be with him, and in My name his horn shall be exalted. Also I will set his hand over the sea, and his right hand over the rivers.

He shall cry to Me, ‘You are my Father, My God, and the rock of my salvation.’ Also I will make him My firstborn, the highest of the kings of the earth.

My mercy I will keep for him forever, and My covenant shall stand firm with him. His seed also I will make to endure forever, and his throne as the days of heaven.