“I will deliver you from the Jewish people, as well as from the Gentiles, to whom I now send you, to open their eyes, in order to turn them from darkness to light, and from the power of Satan to God, that they may receive forgiveness of sins and an inheritance among those who are sanctified by faith in Me.’” Acts 26:17-18 NKJV 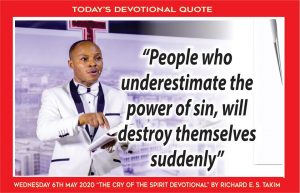 WELCOME TO THE 126th DAY OF OUR YEAR OF REJOICING

It is the 6th day of the fifth Month. As you may have known, God’s agenda for us this month is that we go deep with Him. I guess you are ready?

In our devotional today, we will be looking at some truths that cannot be found in shallow waters; things that I believe will take our faith to the depths of God.

The most dangerous power on earth is the power of sin and Satan. If you read the Bible you will find out.

You see, God can destroy nuclear or electric power by sitting down on His throne and sending a word against them. He can destroy any other power by sending commands from the throne room and off they are gone. But He could not destroy the power of Sin and Satan until He came down and died on the cross. That is how dangerous tow two ear.

“..through death He might destroy him who had the power of death, that is, the devil, and release those who through fear of death were all their lifetime subject to bondage” (Hebrews 2:14-15 NKJV).

MOST OF THEM USUALLY END VERY TRAGICALLY.

The Bible is full of stories of even warriors of God who underestimated the power of sin and Satan and ended tragically, something that could happen to any of us if we are not careful. The first king of Israel was one

The Bible said, King Saul lived a rebellious life. He never fully followed the LORD. Apart from his rebellious life stay, he also consulted a witch. Indeed, he underestimated the power of Satan that was why he went to that women, and God killed him. God creates calamity to stop the enemy whenever he wants to stamp his authority anywhere near GOD.

Another thing the death of Saul did was to remove the breach his visit to that witch created on the throne, and to teach us something deep about the anointing He anoints us with. Many do not know that the anointing that God gives has a secret rule in it – that rule is, you do not mix with anything else, else it will kill you.

Saul never knew this. He died! It is costly to be truly anointed of the LORD. The next person I want to mention is Samson.

Many in Church today have underestimated or are underestimating the power of hatred, rebellion, bitterness, jealousy, lust, pride, drunkenness, deceit, love of money, wickedness, vengeance and destroyed their souls. Sons and daughters of Jesus Christ who underestimate the power of sin and Satan, will always loose precious blessings.

There is one thing God wants us to do to the power of sin and Satan; He wants us to turn away from them.

HE WANTS US TO HAVE NO FELLOWSHIP WITH SIN OR SATAN.

Prophetically, these two powers have been destroyed on the cross. They no longer have dominion over those who are in Christ. But their destructive effects will still happen in our lives if we have fellowship with them. That is why the Bible warned.

“And have no fellowship with the unfruitful works of darkness, but rather expose them. For it is shameful even to speak of those things which are done by them in secret. Ephesians 5:11-12 NKJV

The unfruitful works of darkness are the many kinds of sins we expose our souls to and the evil works of the devil all over the earth.

For instance, spending time to gaze at nude men and women and what they do with their bodies on the social media is having fellowship with unfruitful works of darkness.

Many have become slaves to demons in charge of pornography through that.

A major highlight in our devotional text today says;

“I now send you, to open their eyes, in order to turn them from darkness to light, and from the power of Satan to God, that they may receive forgiveness of sins.”

This was a mandate God handed over to Paul during His salvation experience.

To me, this was an apostolic mandate, and remains the true mandate of God to the Church. That is why any gospel ministry or Church assembly that is not turning people from darkness to light will never be able to turn them from the power of sin and Satan to God.

Have you wondered why many have gone to Church for years, and are still held down by the power of sin and Satan?

Most Churches today lacks what it takes to turn people from sin and Satan to God. They have all the money-making preaching and teachings but lack Heaven making messages. Hence, there is no word to push people to the place where the power of sin and Satan is broken – the place of deep intimacy with Jesus Christ.

THAT IS WHY GOD IS CALLING US TO DEEP INTIMACY.

The power of sin and Satan are deep powers that can only be broken practically in our lives through deep intimacy with Jesus Christ. Shallow intimacy will never do it.

Christians whose relationship with Jesus Christ is shallow will never be victorious over these two powers. They will not be able to extend the victory of the cross into their lives. And do not forget, you can be praying and fasting in shallow places in the spirit. So, this is not just about praying and fasting. It is more than that!

I pray that as you go through this day, the Spirit of the living God will keep ringing the bell of deep intimacy in your spirit man. You will not cease hearing Heaven saying, “Come down deeper and catch things that eyes have not seen, nor ears heard.”

One of the things you will catch is permanent victory over the sting of death and Satan! The Bible says the sting of Death is sin. And I want to add that the sting of Satan is death because what he did to Adam and Eve in the Garden brought death into the human race.

No one has ever survived these two stings without rushing back to God for mercy. That is why if we go deep with Jesus Christ, we will never come under them because in Him is light and the light is the life of men.

It is a new day for you!

LET THIS SCRIPTURE BE AN ADDITIONAL MEDITATION FOR YOU TODAY

“I am He who lives, and was dead, and behold, I am alive forevermore. Amen. And I have the keys of Hades and of Death.” Revelation 1:18 NKJV