“And I also say to you that you are Peter, and on this rock I will build My church, and the gates of Hades shall not prevail against it. 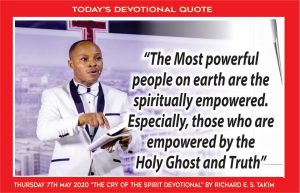 WELCOME TO THE 127th DAY OF OUR YEAR OF REJOICING

In our Church in the house virtual services this week, we have been dealing with the subject of Prophetic Intelligence. One major challenge that humanity faces every day is the battle against unseen forces. The necessity of prophetic intelligence cannot be over emphasized.

Since the spiritual is the birthplace of the natural, spiritual forces are indeed responsible for all physical activities. They are the power behind the happenings on planet earth. But when you lack the prophetic intelligence to walk with the LORD and neutralize these evil forces, you will always need deliverance.
That is why people who are spiritually empowered are the most powerful people on earth. They can move the unseen against the seen and control things to the amazement of others.

Our scriptural text today is full of truths that we cannot unpack in a devotional. It was a statement Jesus, the creator of Heaven and earth, made when He came to redeem mankind from the power of sin and Satan. Today we shall revisit some apostolic terminologies I had taught in time past. I hope we are ready to be refreshed.

When Jesus said, “I will build my Church; and the gates of hell shall not prevail against it” He was making a declaration of war. It is a statement that is full of truths like, the vision of the Christian faith, how all Heavenly visions on earth should look like, the secret code of victory in warfare, the photograph of someone who is genuinely saved and sanctified, etc.

Sadly, religion has blind-folded and prevented many from coming into the bulk of revelation trapped in that statement. I promise you, your life will not remain the same, if you come into the full revelation in what our LORD and Savior, Jesus Christ stated that day.

TO START WITH, THE WORD CHURCH IN THE STATEMENT IS THE SAME WORD AS “ECCLESIA.”

Ecclesia means called out ones. In other words, the word Church is a description of people who have been called out of the darkness of sin, Satan, the evil and corrupt system of this world and all that is not right in God’s sight, to God’s marvelous light – Jesus Christ, His teachings, His ways, and His Spirit.

Meaning if you have been truly called out, you will not be seen living in adultery, fornication, lying, craftiness, deceit, wickedness, bitterness, or any other work of the flesh. You will not be comfortable walking in the filthiness of the flesh and the spirit. The Bible says,

“Having therefore these promises, dearly beloved, let us cleanse ourselves from all filthiness of the flesh and spirit, perfecting holiness in the fear of God.” 2 Corinthians 7:1 NKJV

You will just find yourself spending your days, perfecting Holiness in the fear of GOD. Meaning, any Christian you see doing the opposite is not part of the Church yet. Christ was therefore saying, I will build my “called out ones,” and the gates of hell shall not prevail against them.

Again I repeat, If you are still walking in darkness, it does not matter what you may be doing in a local Church assembly, you are not yet part of those Jesus called “My Church” if you are not spending your days perfecting Holiness in the sight of GOD. That could be why devils are prevailing against you.

Sadly, a lot of people go for deliverance, blaming the sins of their fathers for things their wicked lifestyles brought upon them.

If you say you are saved but did not totally surrender your life to Christ, the portion you are still holding back will become the home based of afflicting demons, bringing serious spiritual problems to your life. Let no one confuse you about that. Let no prophet or prophetess, sale any dummy to you about who may be responsible for your problems.

If you are part of the “Church,” GOD’S CALLED OUT ONES, you will not be having persistent and successful spiritual problems.
THAT WORD CHURCH ALSO MEANS “CABINET” OR “PARLIAMENT.”

In the days, this statement was made, there were no democratic parliaments. What they had was monarchy. The disciple therefore had a better understanding of the statement. That was why they made intimacy with Jesus the ideal thing and had no denominations.

In the days this statement was made, the kings do have a selected people, who interact with him from time to time in a cabinet, and leave those intimate meetings with him, to go out there to implement what was discussed.

In other words, Jesus was saying, I will build a people whose job description will be to sit with me, know my will and governmental policies for the nations, and go out there to implement them. And the gates of hell shall not prevail against it. Hallelujah!!

You can agree with me that only those who are deeply intimate with Jesus can function that way on the face of the earth. Intimacy with Jesus Christ makes you part of God’s cabinet on earth.

On the flip side, lack of intimacy with Jesus makes you part of the cabinet of the gates of hell on earth. And if you happen to be in a Church leadership that way, you will be implementing the agenda of the Antichrist spirit in that Church, sometimes without you or others knowing it.

When you become part of Heaven’s cabinet on earth, you will begin to attend meetings Spiritually in Heaven by the Holy Ghost, where the King of kings and LORD of lords preside over – meetings about His moves on earth.

THE MEETING PLACE WILL BE THE PAGES OF THE SCRIPTURES.

You will find the KING of kings there, revealing Himself to you in His word and transmitting His policies, will, ways, and agenda to you for implantation, either in your life, immediate environment, or nation. Consequently, you will begin to walk in great understanding of the activities of Heaven on earth, and in the revelation of your role in God’s end time plans.

The basic assignment of a parliament is to make and revoke laws.

Our Job therefore as Jesus parliamentarians, is to listen to Him, and revoke whatever does not agree with His will in our lives, the lives of those He may have assigned to us and our nations, through accurate prayers and righteous decrees.

The three definitions of the word Church, therefore, tells us that Church is not a religious thing.

Church is a spiritual governmental thing. It is more governmental than religious. We are representing the government of Heaven on earth and a lot depends on us. But the reason why we have not risen to our responsibility is because we are not deeply intimate with Jesus Christ.

You can even begin to see why Christ is furious with falsehood in Church ministry today. You can begin to see why He entered the synagogue and drove out those who turned Church ministry into a money-making machine in Bible days. His Spirit does not usually handle false teachers, prophets, and prophetesses kindly. He screams against their activities using any willing vessel He can find, to stop the distortion of His eternal purpose of the Church.

IN THE OLD TESTAMENT THEY WERE STONED TO DEATH.

But today we give our tithes and offerings to them. Which explains why many Christians are suffering. We are suffering because many of us are using our monies to get Christ angry.

A major highlight in His statement says, “I will build … and the gates of Hades shall not prevail …” It is when we are built up by Christ that we can function as His parliament or cabinet on earth. And we cannot be built up except we are deeply intimate with Him.

When we become intimate, we will be built up and the gates of hell shall not prevail against us. Hallelujah!

Now, talking about the gates of hell, there are three major gates mankind is confronting: the gates of death, the gates of grave and the gates of hell. I shared these mysteries deeply in our Just concluded Easter Retreat. The word gates describe entry points from the invisible to the visible. Another word for gates is portals.

When Jesus made that statement, He did not include the other two gates because His death on the cross and resurrection will deal with them. He limited Himself to the gates of hell because mankind will be in constant battle with hell. But it shall not prevail against those He is building.

“I am He who lives, and was dead, and behold, I am alive forevermore. Amen. And I have the keys of Hades and of Death.” Revelation 1:18 NKJV

MAKE THIS SCRIPTURE AN ADDITIONAL MEDITATION ON EARTH.

And when he was come into Jerusalem, all the city was moved, saying, who is this? And the multitude said, this is Jesus the prophet of Nazareth of Galilee.

And said unto them, It is written, My house shall be called the house of prayer; but ye have made it a den of thieves.

And the blind and the lame came to him in the temple; and he healed them.

And when the chief priests and scribes saw the wonderful things that he did, and the children crying in the temple, and saying, Hosanna to the son of David; they were sore displeased,

And said unto him, Hearest thou what these say? And Jesus saith unto them, Yea; have ye never read, Out of the mouth of babes and sucklings thou hast perfected praise? Matthew 21:10-16 KJV