“For God so loved the world that He gave His only begotten Son, that whoever believes in Him should not perish but have everlasting life. For God did not send His Son into the world to condemn the world, but that the world through Him might be saved” John 3:16-17 NKJV 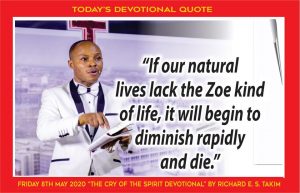 WELCOME TO THE 128th DAY OF OUR YEAR OF REJOICING

It is another day the LORD has made; we shall rejoice and be glad in it. Hallelujah, Let’s hit the ground running.

There were no trees, no seas, or any created thing. There were no angels, or any other Heavenly being. In simple terms, there was no Heaven or Earth or the things that presently exist in Heaven and Earth. There was just God and His glory.

Then He began to call them forth from His glory – He called forth Heaven, then created Angels and all Heavenly beings to live in Heaven. Then the fall of Lucifer took place. Then in a redemptive move, He then called forth Earth, and created all earthly things we see on earth.

Lastly, He created man and placed him in a Garden on earth.

Now, as beings that were outsourced from God or from Heaven, we were not designed to survive by living from the earth realm. We were designed to spend our earthly lives from the Heavenly realm that we came from.

THAT IS WHAT REDEMPTION IS ALL ABOUT.

Jesus came to make it possible for us to live the Kind of life man lived before the fall. He came to restore us back to the Heavenly life. Our devotional text said, “For God so loved the world that He gave His only begotten Son, that whoever believes in Him should not perish but have everlasting life.”

Everlasting life is that very life we lost at the fall. It is a life that is outsourced from Heaven, a Heaven on Earth life. That was what man had before sin came in. When sin came in that life died. But thank God Jesus came and restored it back. Now we can have it again.

We can have a part of it in this life and the full of it in the next life.

Everlasting life in this life makes an earthly life supernatural. It is called “Zoe.” A lot of present-day Christians have not heard of a term like that because of the influx of false teachers in church today. But there is a life that comes into the saved and sanctified during salvation encounter. It is what the Bible calls everlasting life – the Zoe kind of life.

Everlasting life is the Zoe kind of life that we must never lack while living in this wicked world. It kills diseases in the body of an earthly life and empowers it to live beyond earthly limitations, including the Corona Virus, that was later given the baptismal name COVID-19.

IF A NATURAL LIFE LACKS THE “ZOE KIND OF LIFE,” IT WILL GROW WEAK AND DIE RAPIDLY.

In this Corona Virus season, it is important to understand that it is the absent of the Zoe life in people that is responsible for all ailments and fatalities that take place through ANY KIND of diseases, including, Corona itself, heart failure, cardiac arrest etc. Except you have come to the season of your departure from the earth like Elisha did, when this life is absent in the life of a man, critical organs of his body can begin to fail.

The purpose of the Zoe life, among other things, is to sustain our kidneys, heart, lungs, arteries, bones, and bone marrows, and all that makes the body function properly. The Zoe life is for divine preservation. It is a life that our generation seems not to know. It was a revelation that exploded when Christianity was real but diminished and finally died when the harlot church emerged.

The harlot church is made of a group of Christians – church members and their spiritual fathers – who feed on messages that puts money in their pockets but takes GOD away from their hearts. It is full of Christians who are walking in the doctrines of the Nicolaitans, Jezebel, Molech, Baals, and Ashtoreth. Others that make up the harlot church have forms of godliness without power.

When you talk to them about sin and righteousness, they will tell you, “do not judge me. I am already saved; I am the righteousness of GOD in Christ Jesus.” They make loud confessions of faith that their characters do not match. Some are so generous, but generous enough to steal the souls of men from true paths of worship to the paths of the kingdom of darkness.

Today we do not even hear any preacher talk about the zoe kind of life and make it a major of the Christian faith. Many have made the teachings and doctrines on tithes, sacrificial offerings, raising of altars, spirit husbands, redemption of first born and other doctrines of greed and covetousness, called the doctrines of devils, their majors. Basically because of the relevance or money it gives them.

BUT IN THE BEGINNING, IT WAS NOT SO!

When the New Testament Church started in the books of acts, it was the Zoe life that was driving those who got saved. It was the very life they were preaching to the lost and declaring from people to people and place to place. They preached and demonstrated it.

People responded to it, until the devil that had held them down became incredibly angry, and deployed the charlatans and false prophets we have today. Now we have a generation that does not know these basic pillar of the Christian life.

There is a life that forms one of the pillars of the Christian faith.

A statement that an angel of the LORD, on a rescue mission, made, when he went to rescue the apostles that were ceased, arrested, and put in jail has a truth to glean from. The Bible says the angel said this to them; that was after rescuing them;

“Go, take your stand in the temple courts and declare to the people the whole doctrine concerning this Life (the eternal life which Christ revealed).” Acts 5:20 AMP

The word doctrine means teaching. Obviously, the doctrine of the Zoe kind of life, – which is the eternal life which Christ gives, – was what the early Church preached in the ancient world. It is called the doctrine of Christ. But as earlier stated, our Church generation has lost it. That is why more Christians do not have the Zoe life. Many have even become sicker than unbelievers.

Sadly, we die prematurely and allow the hazards of a fallen life to become a snare to us because we do not have the revelation of the Zoe kind of life.

There are two kinds of life on the face of the earth; the fallen life that is controlled by the fallen nature in every man and the Zoe kind of life that we have been sharing about this morning. You are living either the fallen life or the Zoe life right now. There is no middle ground.

God wants you to live the Zoe kind of life. He wants your inner eyes sharp in the spirit, your health supernaturally sustained, your inner ears receptive enough to pick frequencies from the throne of God and all that.

HE WANTS “THE SUPERNATURAL YOU” TO EMERGE, THAT IS THE GOD WE SERVED.

But “the supernatural you” will never emerge until you step into the Zoe kind of life and start living in it daily. However, this will not be by might nor by power but by the Spirit of the living God.

The Zoe life was purposed by the LORD to be flowing from the Holy Spirit to the spirits of the redeemed of the LORD, daily, from the day of their salvation to the day of their glorification. But that is not possible except we embraced the call to deep intimacy.

In other words, you need to be deeply intimate with the LORD like the Stephens, the Peters, the Pauls of the Bible, and the rest of our apostolic fathers to experience what they experienced – the Zoe life. There and then will our mortal bodies begin to taste the health system of the age to come. There is a health system of the age to come. Very few people have tasted it in this age. That is the system that can not catch corona virus, or any other virus or diseases from the habitations of cruelty.

The call to be deeply committed and intimate with Jesus this end time has become necessary because of the horrors of the last days. A time is going to come, (and I fear it has already come) that if you are not supernaturally enabled to live the Zoe life, you will be terminated prematurely.

This is not to scare you; this is to prepare you. A lot of wicked things are being prepared in the name of solutions to health needs today; things that are meant for evil. The government of many nations will force their citizens to collect them. What will be our insurance package? The Zoe life running through our veins.

As we bring this to a close, I want you to become passionate for deep intimacy. Let your soul hunger for more of Jesus. It will impart everlasting life into your life daily and save you from what destroys mortal men. It will stir the Holy Ghost to quicken your mortal body with the Zoe life, and secure it from the arrows of the wicked.

Yes, it will even kill the power of sin in our lives and make sure our body is dead to sin, and our spirits alive to righteousness.