“And Cain went out from the presence of the Lord, and dwelt in the land of Nod, on the east of Eden. And Cain knew his wife; and she conceived, and bare Enoch: and he builded a city, and called the name of the city, after the name of his son, Enoch.” Genesis 4:16-17 KJV 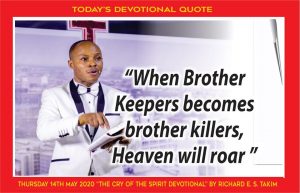 WELCOME TO THE 134th DAY OF OUR YEAR OF REJOICING

In our devotional today we will be looking at some battles that rage against deep intimacy.

Deep intimacy with Jesus is Satan’s greatest fear in the life of a child of God.

You may have earthly riches, feared by men, and respected by the Church, but that does not scare Satan. What scars him to death is a man or woman who is deeply intimate with Jesus Christ.

That is why he sometimes helps people succeed in marriage, ministry, or business just to keep them away from deep intimacy with Jesus.

I want you to understand that though his mission is to kill, steal and destroy he does not always employ same methods in his war against God’s children. Sometimes he employs beautiful methods to achieve his mission.

If there is what you call a blessing in Satan’s kingdom, he will place it on you just to make sure you do not spend quality time with God each morning.

He can give you a wife or husband that will love you away from God and cherish you away from deep intimacy with Jesus Christ. He can “bless” you with a boss that will shower you with great financial rewards for jobs done when you ought to be with God. These are some of subtle moves of the wicked one that many who profess Christianity today, do not escape because of how shallow their understanding of what Christianity is.

SATAN CAN OFFER YOU WHAT LOOKS LIKE A GOOD DEED, JUST TO TAKE YOU AWAY FROM DEEP INTIMACY WITH THE LORD!

When you come under this kind of attacks from him, he will begin to take you off from your prayer knees with calls to come for a job or a money spinning contract you have been desiring. He will fix a life changing appointment you have been waiting and praying for the very day and time God fixed that you shut you be with Him.

You see Jesus spoke about the possible deception of the elects; in a charismatic trend where money and success are been treated as signs that one is truly serving God, an untaught elect of Christ will easily fall to this method of satanic warfare – a method where he uses pseudo answers to prayers to trap people.

Heretic preachers are making the world wiser and the Church stupid. They are deleting righteous passion for God and replacing them with carnal passions for the things of this world. I once heard a preacher say no poor man will be found in Heaven. And the “Charismatic fools” in his church shouted amen to his lies forgetting the story of “Lazarus and the rich man.”

Though not giving license for poverty, Jesus said it will be more difficult for a rich man to make Heaven than for a poor man to get there. So, if not from the pit of hell I wonder where else such preaching is coming from. This is time for the elects to start choosing who they listen to. The Bible says;

“See then that you walk circumspectly, not as fools but as wise, redeeming the time, because the days are evil. Therefore do not be unwise, but understand what the will of the Lord is.” Ephesians 5:15-17 NKJV

Our devotional text today is a unique one. A man’s offering was just rejected by God, and instead of meeting God to settle issue with him, he took things up with his brother and killed him. “When brother keepers become brother killers, Heaven roars.” That is why Heaven is roaring over Africa.

Many brother keepers have become brother killers; most of them because of lands and politics.

So, heaven roared at Cain and instead of pressing into God for mercy, he arrogantly departed from his presence. That was when hell got him. He started prospering outside divine boundaries. He kissed and accepted the prosperity of hell. However, when the flood came it wiped his entire lineage away.

WHAT ARE WE SHARING THIS MORNING?

Cain fell victim of this satanic method of taking men from their knees and closeness with God by making sure he supports the actualization of their hearts desire. If the actualization of a heart desire will keep you far from God, Satan will no longer be an opponent to you. He will be a personal assistant. Do not forget that!

Deep intimacy is the clarion call from the Master to the Church. We have stayed too long in the outer court of the Christian faith, making things very conducive for the devil to operate. Now God wants us to become deep; signs of the coming of CHRIST are everywhere. The glorious departure called the rapture will precede everything. Only men who are deeply rooted in Christ will be taken.

We must therefore begin to rise and conquer the machinations of the evil one and stop him in his tracks. We must stop him as he tries to take us away from our prayer knees with “blessings” that are targeted at killing deep intimacy with Jesus. That is the message of today’s devotional.

“Do not love or cherish the world or the things that are in the world. If anyone loves the world, love for the Father is not in him.

“For all that is in the world — the lust of the flesh [craving for sensual gratification] and the lust of the eyes [greedy longings of the mind] and the pride of life [assurance in one’s own resources or in the stability of earthly things] — these do not come from the Father but are from the world [itself].”

“And the world passes away and disappears, and with it the forbidden cravings (the passionate desires, the lust) of it; but he who does the will of God and carries out His purposes in his life abides (remains) forever.” 1 John 2:15-17 AMP