“We know that whoever is born of God does not sin; but he who has been born of God keeps himself, and the wicked one does not touch him.”

“We know that we are of God, and the whole world lies under the sway of the wicked one.”

“And we know that the Son of God has come and has given us an understanding, that we may know Him who is true; and we are in Him who is true, in His Son Jesus Christ. This is the true God and eternal life. Little children, keep yourselves from idols. Amen.” 1 John 5:18-21 NKJV 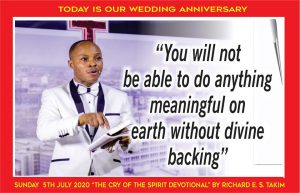 WELCOME TO THE 185th DAY OF OUR YEAR OF REJOICING

So today we will be revisiting some truths on divine backing.
Few years ago, I defined Divine backing as God standing by man in every endeavor of his life. It is simply a supernatural support from a loving God to a people who seek Him. To a kingdom warrior, Divine Backing is God standing by him as a ‘Mighty Terrible One’ (MTO) to help him come out victoriously in the battles of life.

When Jesus was in the flesh as man, He never did anything without divine backing. He was able to raise the dead, heal the sick, come out of terrible storms, walk upon the water, and do all He did because “GOD WAS WITH HIM.”

DIVINE BACKING IS GOD BEING WITH YOU!

For instance, concerning the redemptive sacrifice, the Bible made it clear that He prayed and cried unto the Father (His source), with strong cries – He cried to Him who is able to save Him from Death. He ended up activating the divine backing He had before coming into the world.

The result was awesome. First, death could not hold Him captive.

On the third day after His crucifixion and burial, He came out of the grave victoriously, freeing us from the pangs of spiritual, eternal, and natural death forever. That is why today, to those who are saved, and spirit filled, death is no longer a threat but a horse to use in ridding to the next life!

The point I am making is this; if Jesus needed divine backing to pass through all that, you will be stupid not to crave for divine backing in anything you may want to do. In the world we live today, you will crash and come out terribly beaten without divine backing. The enemy will hinder you in all fronts!

It takes divine backing to do anything meaningful on the face of the earth, especially today.

Let me share one more time my own little story here in East Africa. Everyone is seeing us today doing well, with some claiming that they were the ones that helped us to get this, and get that, and become this and become that. Some who did not even know how we stepped into this nation claimed they helped us to settle down.

Whenever, I hear such things I break down for these souls, who are looking for cheap recognition and maybe applause. Most of them say all that to present us in a bad light to our enemies. But let God be GOD and all men liars.

We are what we are today through divine backing. Nothing else. There was this lady who received us at the airport, the night we arrived, she has never even opened her mouth to say that to anyone neither has she made any of the stupid claims these polluted minds are making. In fact, she is not even our church member. She only attended our meetings once a while, and that was when we were less than fifteen in attendance.

Apart from the first meeting we had with some preachers who wanted to use us to raise money for their ministries, the cry of the Spirit started with me and my wife, then we grew to four souls and then fifteen. Many times, we wanted to go back home, but God always come through for us.

When we first came, we knew no one who could support us. We were not sent by any missionary group. We were just here, us and God.

I remember worshiping in a local Church and meeting a couple that asked my wife and I when they got to know that we were here on assignment, what organization sent us. We said “none!” Then they responded, “woo… you will not be able to do anything meaningful here without foreign backing. That is terrible.”

Now that meeting took place at a time when we had no money in our hands. Whatever we brought had been stollen, we could not even pay our rent successfully when we heard those words. So, it left me very frustrated and discouraged.

BUT I REMEMBERED WHAT I SAID MANY YEARS AGO WHILE PREACHING.

I remembered saying to an audience that “If God throws me into an Island with just my Bible in my hands with no one to support me, I will fill that Island with people and provision through prayer.” So, the Holy Spirit brought that word to me and said, “this is the Island. Now fulfill your promise.” It was not funny, but it pushed me to work it out.

We bowed our knees to God who alone we had (and still have), the God who called and sent us to East Africa without external support from anywhere.

We sought Him with the whole of our hearts and listened to the little steps He asked us to take in response. I remember my wife praying without ceasing so many days and night. We both travailed in separate rooms but with the same spirit, because we don’t pray the same way we had to pray in separate rooms. I pray and then wait to listen; but she prays and continues until she touches the invisible before stopping. But the presence of GOD was with us. He never forsook us.

Now, with a divine decree not to beg, borrow, or go into business, we soldiered on, seeking Him to make way for us to preach His word and execute the apostolic mandate he brought us here to execute.

The Bible says, as soon as Zion travail, she brings forth her Children. There is no meaningful thing that can be accomplished with GOD without THE PEOPLE OF GOD travailing in prayers. We did travail and God honored His mandate by bringing the results.

Today we have so many friends, sons, and daughters in the LORD, birthed by the Spirit of the LORD through the prayer knee. We are a living testimony that “one with God is indeed majority.” Standing from where we are today, I can understand why God never allowed anyone we knew to help us. He wanted to protect His glory. Because, like I stated earlier, even those we helped to stand are now claiming they were the ones that helped us.

You see, success has many friends, but failure is always an orphan.

If you fail in anything in life, even those who made you fail will never say they contributed to your failure. They will rather insult, and call you all the names their wicked hearts gives them to call you. They will blame your failure on so many things that are not true. Some will even return just to make sure you never rise again.

That is why we need divine backing in this world to become all that God has destined us to be.

WHAT IS THE MESSAGE OF OUR DEVOTIONAL TODAY?

The message is simple. Do not go into anything without divine backing. We did not come to East Africa on our own, Jesus appeared to me in Spirit and said, “Meet me in Kenya.” It would take me almost a year to meet Him finally in Kenya. If He had not brought me here by His proceeding word, even a cockroach would have sent me back.

With divine backing, you will not be running in your own strength. You will be running in the strength of the almighty. People will be wondering why you are making such great waves and gaining such great speed. Those who are wise will know it is not you but someone bigger than you.

I have discovered that a man who try to copy or compete with those God is backing will end up frustrating himself.

When you run against men who are not running spiritually with their natural feet, men who are running with the feet of God almighty, you will just weary yourself. The race is not to the swift and the battle not to the strong. It’s God’s divine backing that makes the difference in life and ministry.

YOU WILL NEED DIVINE BACKING TO ESCAPE FROM THE SWORD OF YOUR ENEMIES.

“For a wide door of opportunity for effectual [service] has opened to me [there, a great and promising one], and [there are] many adversaries.” 1 Corinthians 16:9 AMP

It is impossible to deal with the many adversaries that surround divine opportunity without divine backing.

Friend, our present world is under the sway of the evil world. Look at what wicked men are using corona virus to do with the lives of men and women. This world is too dangerous to be lived without divine backing.

Satan will sway people to do terrible things to you. He will sway them to speak ill of you, hinder you from achieving, withhold good from coming to you, or build a wall around those God may have raise to help you, just to prevent them from reaching you. If you do not have divine backing, he will succeed, and you will never achieve meaningfully in life.

A major highlight in our devotional text today says; “We know that we are of God, and the whole world lies under the sway of the wicked one.” If you do not have divine backing in whatever you may be doing, the enemy will sway people against you and there will be no help from God to conquer them.

LET THIS SCRIPTURE BE AN ADDITIONAL MEDITATION FOR YOU TODAY

What shall we then say to these things? If God be for us, who can be against us? Romans 8:30-31 NKJV