“When He opened the seventh seal, there was silence in heaven for about half an hour. And I saw the seven angels who stand before God, and to them were given seven trumpets.

Then another angel, having a golden censer, came and stood at the altar. He was given much incense, that he should offer it with the prayers of all the saints upon the golden altar which was before the throne.

And the smoke of the incense, with the prayers of the saints, ascended before God from the angel’s hand. Then the angel took the censer, filled it with fire from the altar, and threw it to the earth. And there were noises, thunderings, lightnings, and an earthquake. Revelation 8:1-5 NKJV 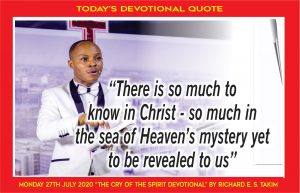 WELCOME TO THE 207TH DAY OF OUR YEAR OF REJOICING

We are in a prophetic season of the opening of seals – seals of divine revelations in the kingdom of GOD. A lot is going on in our world that so many are unaware of. Not just in the spirit’s realm but in the natural realm.

Some of these things are so terrible and even fearful to hear that is why some of us do not share them. The evil one is planning a huge thing for humanity of our generation. The COVID thing is part of the plan. Satan has never hatched a good plan for anyone.

Apart from the individual plans he has against every one of us, especially those fighting the battles of the LORD, there is a global plan to completely control the entire human race. Except the LORD and owner of the earth intervene and stop him, things are going to be so bad that people will begin to do very despicable things that the world has never seen, to survive.

But I believe Jesus saw all these afar off before saying, “Lo, I am with you always, even to the end of the age.” And we are right in the end of the age. That tells us the only survival kit available to us in the presence of the LORD Himself.

It is last week of the 7th month July of our Year of Rejoicing. I want to say despite all we have seen and are still seeing, it has been a blessing waking up each morning and receiving from God light and understanding for each new day.

IN THE CHRISTIAN FAITH, IF WE ARE NOT GUIDED DAILY BY THE LIGHT OF THE LORD, WE WILL STUMBLE AND FALL.

What is lighting the natural world at night is electricity, but what is lighting us as we walk through the moral darkness of this world, is JESUS CHRIST, the true LIGHT of the world. The LORD has indeed been using these devotionals to light our paths on daily bases, as we wake up each morning. To Him be the glory in Jesus precious name. Amen and amen!

Our devotional text this morning is a deep revelation that we cracked when I was teaching on the Signs of the Baptism of the Holy Ghost and Fire in our school of the Spirit in 2016. I remember vividly that one of the highest points of the sessions was when the LORD tore veils from the hearts of the people – veils on evil altars.

Indeed, as we can all see, so many so-called deliverance ministers have veiled the Church from seeing the supreme altar of God in Heaven that works with the altars of our hearts to sanctify and purify it for God to dwell in. They have successfully done this by teaching, emphasizing, and harassing us with books, tapes, and sessions on evil altars.

Many even demanding great financial sacrifices to be free or asking that they follow people to villages to uproot them.

I remember the first apostolic Truth Bible Summit we had on the Morning Cloud Television that further reinforced our understanding. It is teachings like this that have reduced us to mere men instead of God’s deputies on earth. Yes, the have robbed us of having a seat in the council of Heaven as Christ’s cabinet on earth, to enforce His will in the nations of the earth as written in Heaven.

Globally, its clear that the seeds of the evil one are seated in council with him, enforcing his wicked will on earth as propelled by his eternal vision. While we are we are just mindful of our needs, this nexus of evil is spreading its net globally taking territories for the wicked one.

If the control being exacted on the Church through the Corona Virus thing has not woken us up, I do not think anything would. The Bible says in the world we will have tribulations, but we should be of good cheer for our LORD has overcome the world.

BUT HOW MANY OF US ARE ENFORCING HIS VICTORY AND SPREADING HIS INFLUENCE OVER TERRITORIES?

While these agents of the devil are territorial in their activities, we are selfish in our walk with the LORD. For instance, the highest desire of an average single Christian today is marriage, not taking over territories for GOD. Where can we find single Christian ladies or men who will forget about themselves and cry unto the LORD saying, “give me this City (or that nation) to reap into your kingdom or I die.”

Yet that was the heart cry of those the LORD used to bring salvation and revival to us. They had no teachers or Churches that taught them to break evil altars, raise this sacrifice or that sacrifice, or redeem their first born.

They had no preacher who served Holy Communion carelessly until it become communion of devils. They had no one giving them prayer points to say against spirit husbands, wives, or any other thing. They had no heretic teachers or prosperity killers. They had Holy men and woman of God teaching and training them to become the body of Christ indeed.

One of the greatest way Satan neutralizes the saints of any generation is to raise acceptable preachers who will feed them with teachings that do not form Christ in them. Yes, teachers that sound so helpful to their quest for earthly success at the expense of God’s eternal purposes for their lives.

Those who have mystical appeal are drawn to preachers who teach about what the Bible calls the depths of Satan. The make Satan, the ex-Nephilim known today as demons, and their works their curriculum, even calling the teachings deep. The forget that anything a man learns about Satan and his evil works is not “deep” but “dark.”

The only revelation approved of GOD for mankind is the revelation of Jesus Christ, impacting your life with His power, the knowledge of His will, the revelation of His plans and goals for your life. That is what the Spirit of the LORD reveals to God’s own people when they meet the LORD. He does not talks about the evil one, except his devices.

PAUL, ONE OF THE POST RESURRECTION APOSTLES OF JESUS CHRIST, PUTS IT THIS WAY,

But as it is written:

“Eye has not seen, nor ear heard, nor have entered into the heart of man the things which God has prepared for those who love Him.”

“But God has revealed them to us through His Spirit. For the Spirit searches all things, yes, the deep things of God.” 1 Corinthians 2:9-10 NKJV

He went on to state that,

“These things we also speak, not in words which man’s wisdom teaches but which the Holy Spirit teaches, comparing spiritual things with spiritual.” 1 Corinthians 2:13 NKJV

Sadly, today the reverse is the case, leading to an outbreak of the activities of the spirit of lawlessness. Most ministers and ministries that call themselves deliverance ministries and ministers do not know they are advancing the works of the evil one. The do not know that they have gone beyond the boundaries God set.

I have always wondered; how can we be Children of LIGHT and be spending our energy educating ourselves about the works of darkness? That is why many of us are weak and self-centered.

WE CANNOT EVEN DISPENSE THE POWER OF GOD TO HEAL A LITTLE HEADACHE.

Friend, there is so much to know in Christ – so much in the sea of Heaven’s mysteries yet to be revealed to us.

Daniel knew some and wrote it down in his book. Jeremiah, Isaiah, Moses, Ezekiel, some of the early Apostles, and finally John the beloved, knew some of these things and transmitted them to us. None of them spent their time lining up with occult teachings by reading, studying, and writing about evil altars, evil foundation, evil patterns, monitoring spirit, or any other debt of the evil one.

One day the Spirit of God spoke to me saying, “Men who live under the glory, do not talk about evil altars or evil works. They talk about the altar of God in Heaven and His righteous works. It is men who are under the anointing and seek to bring deliverance to people outside the realm where permanent deliverance takes place that speak about evil altars and all related works of the enemy.”

I began to understand that the subject of evil altars is simply a money-making doctrine and not a Heaven making teaching. It functions as an instrument of inflicting people with fear, bringing people to the place of sacrificing any resources towards the economic freedom of the preachers.

You see, under the Old Covenant altars were places. But in the New altars are human hearts or spirits. We can become God’s altars on earth by giving our lives to Christ and receiving the Holy Spirit into our lives. When that happens, we connect God’s altar in Heaven and become its pattern on earth. That altar is captured in our devotional text. A major Highlight of it says;

“Then another angel, having a golden censer, came and stood at the altar. He was given much incense, that he should offer it with the prayers of all the saints upon the golden altar which was before the throne.”

“And the smoke of the incense, with the prayers of the saints, ascended before God from the angel’s hand. Then the angel took the censer, filled it with fire from the altar, and threw it to the earth. And there were noises, thunderings, lightnings, and an earthquake.”

This is the altar that you connect to when you become God’s altar or ark on earth. If you are blind to this altar in Heaven, you will be limited by the evil of this world.

What is the message of our devotional this morning? The message is simple. Until you are connected to the altar of God in Heaven and become God’s altar on earth, you will never be free from any works of the devil.

MAKE THIS SCRIPTURE AN ADDITIONAL MEDITATION FOR TODAY!

“And I will give you pastors according to mine heart, which shall feed you with knowledge and understanding.”

“But I will gather the remnant of My flock out of all countries where I have driven them, and bring them back to their folds; and they shall be fruitful and increase.”

“I will set up shepherds over them who will feed them; and they shall fear no more, nor be dismayed, nor shall they be lacking,” says the Lord. Jeremiah 23:3-4 NKJV