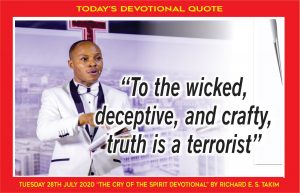 WELCOME TO THE 208TH DAY OF OUR YEAR OF REJOICING

We are racing into the 8th month of our year of rejoicing. It is going to be another new month. New months to kingdom citizens, calls for new levels of faith. That is why am extremely excited about our 50 days ride on the “WINGS OF THE SPIRIT” starting on the 1st day of the 8th month of the year.

If you are an Esau Christian, this will not make sense to you, but if you are a Jacob Christian, you will be very anxious for this great ride where we will experience a special Baptism of the Spirit of prophecy. This Baptism will move us from one realm of faith to another.

So many Christians are either in the outer darkness or the outer court. GOD wants everyone of us in the Holy Place where we are integrated into church – the body of Christ global. The driving force of the Kingdom is to move us from one realm of grace and glory to another.

The Bible admonishes that we grow; yes, we are expected to grow in in our walk and talk with GOD, from 30-fold to 60-fold, and from 60-fold to 100-fold. That is the plan of GOD for lives.

Though you will sit at home while I stand to reach you through your tv set or any streaming device, Holy Ghost enabled interface meetings like this are some the things that people’s destinies scream for without them knowing about it.

In our devotional text today, Paul wrote to the Church at Philippi those strong words that has shaped the destiny of many from generation to generation.

IT IS A DEVOTIONAL TEXT THAT STIRS HUNGER FOR MORE OF GOD.

I ate it in my days, and it propelled me to realms that am still reaping the dividends till date. What endeared me to this scripture was what I discovered about it. I discovered that most revivalists God used to kindle the flames of REVIVAL fed on it over and over until it ate them.

There is, therefore, something about the scripture that needs urgent attention in our generation. That is why I believe, the LORD had us to have it as our devotional text today. A major highlight in the text says,

If we do not forget the things that happened yesterday – the good, the bad and the ugly – and press into what God has predetermined that it happens today, we will never unleash our divine destiny. A generation that holds on to past glorious or inglorious things that happened to it will never be able to finish its course in God’s eternal plan for mankind!

IF YOU ARE TRULY SAVED, YOU WERE SUPPOSED TO BE PART OF GOD’S MOVING ARMY – THE END TIME CHURCH

The Bible made it clear that this Church is fair as the moon, clear like the Sun and terrible like an army with banners. That is why Satan fears its emergence. Ephesians calls it the glorious church. Songs of Solomon calls it “the terrible Church.” Not terrible in a negative sense! It is terrible because of the glory of GOD beaming upon it and spewing out truths that can terrorize the kingdom of darkness.

You see, truth is a terrorist to the wicked, crafty, and deceptive. That was why John the Baptist was beheaded and Jesus Crucified. That was why our fathers, except John the Beloved, died the way they did.

Every agent of darkness suffers from a phobia about Light – Yes, light from the revelation of the LIGHT of the world Himself – Jesus Christ. That is why they preach about evil altars, spirit husband or wife, evil foundation, and all other dark teachings from the occult world. They cannot stand the light of the world and the revelation of who He is, preached by His apostles and prophets.

GOD’s answer to the devils of the end time is an end time Church that is fair as the moon, clear like the Sun of righteousness, and terrible like an army with banners. God wants you to be part of this Church. He wants you to stop the noise of religion and come into this spiritual house as a lively stone, fitted together to function as a habitation of GOD in the Spirit.

But that can never happen except you humble yourself and press on to places in GOD that even angels dread – places reserved for sons only. A lot will happen to great destinies in our age if we do not embrace this simple step to becoming part of God’s end time moving army.

A moving spiritual army moves from faith to faith, truth to truth, grace to grace, and realm to realm. They do not camp at one spiritual height.

Samson made a major mistake in this regard and remains a bacon of truth for all of us. At the success peak of his life, he decided to camp around earthly things. The Bible says no one who engage in warfare entangles himself with the affairs of this life.

THE ESSENCE IS TO PLEASE HE WHO ENLISTED HIM TO BE A SOLDIER.

Any walk with GOD that does not keep a man pressing into such things daily, is just a form of religion that lacks power. You must learn to press into what God want to do next in your life, or with your life, after watching Him do one thing with it. If this kind of righteous walk is absent in your Christianity, then you will be stuck to a season that will open you up to the perils of life.

Take David for instance, when did he see Beersheba, the naked woman who trapped him into sin? It was when in a season when kings go to battle. He behaved like a successful African. The Bible says,

Everything you just read and what happened because of it, is traceable to one season the King did not go to war; one-time great King David got stuck to a season of success.

LITTLE THINGS ARE MOST TIMES RESPONSIBLE FOR THE FALL OF GREAT THINGS!

If he had been in the battlefield responding to the next devil God wanted him to kill – the next thing God wanted to do with his life, he wouldn’t have seen a woman who was busy taking her bath from his pent house. There is a way our carnal desires TAKE THE BETTER PART OF US when we are not in the battle fields of our divine destinies doing the will of the LORD.

So many in the present Church today, are stuck and stinky in the Spirit, because they do not know or apply this in their walk with God. We rather move from one marriage program to another, one poverty killing meeting to another, but do not move from realms of glory to another.

Sometimes I ask myself, “when will this poverty be finally killed.” The same people on the same pews for years, doing the same things and hearing the same messages yet no true changes. Don’t you know it is a scam?

Yes, God’s prospers His people – He lifts up the poor from a dunghill and sets him among princes. But God does not prosper His people with the prosperity of the wicked. Look at the world, and see how their prosperity is destroying them.

I know preachers in Nigeria who have been doing the poverty killing thing for years.

Whatever the have been doing have made them so rich that if they withdraw their monies from the Nigerian banks, the banks will fold up. In fact, there are those who do not know where to keep these monies anymore. They ended up opening banks with it.

They did exactly what the Bible describes as the prosperity of a fool! Sadly, so many Kenyan pastors have picked those messages and are now preaching them here, claiming to be poverty killers.

The truth is any man or woman preacher, who takes you from one poverty killing message to another is not genuinely interested in killing your poverty. It is his poverty he wants to kill, and many have killed theirs using this scam in the name of ministry.

GOD LAMENTED OVER THIS STATE OF THE CHURCH IN REVELATION 3:10-20.

Whenever a local Church lost touch with the glory, preachers will settle on using the anointing to solve earthly problems, the purpose is to exploit the people and leave them with great eternal problems.

When it comes to matters of the Christian faith, no pressing, no progress – you must press from one level o to another or from one faith building activity to another.

I pray for you today, that as the curtains of the month of July 2020 closes, you will catch the fire and join us on the next mountain to climb in the glory of the LORD – the 50 days ride on the WINGS OF THE SPIRIT.