Home DRAW NEAR TO GOD THE CRY OF THE SPIRIT DEVOTIONALS – BY RICHARD E. S. TAKIM

“Say to God, “How awesome are your works! Through the greatness of your power your enemies shall submit themselves to you. All the earth shall worship you and sing praises to you; they shall sing praises to your name.” Psalms 66:3-4 NKJV 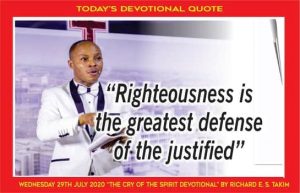 WELCOME TO THE 209TH DAY OF OUR YEAR OF REJOICING

God have been faithful to us and has kept us for 209 days in this year of Rejoicing. We have escaped so much by His outstretch arm, including the COVID-19 thing. There are a lot of reports of a cure from a medical group in the United States, whose videos are all over. I believe the attempt to suppress it will be destroyed by the LORD of host.

God does not like people dying. Only the devil does. I remember the LORD saying to me some time ago that there is nothing that will ever come out of hell that has no cure already waiting for it on earth. That tells me, if we see anything that seems to have no cure, it is either because the cure has not been discovered or the information about it is been hidden or suppressed.

With the feelers we are getting from born again Christian doctors in America on the COVID issue, the cure is been hidden through twisting or suppression of information. It is my prayer that our governments in Africa will wake up and listen to this people instead of listening to those who only predict its rise and does nothing truthful to save those dying of the virus.

There is so much resistance to good on our planet earth. Even those you want to do good to has a way of resisting you from doing it. That is why it is practically impossible for the Kingdom of God to advance effectively without the demonstration of the Spirit and the power of GOD.

It is practically impossible to fight the battles of the LORD, work with Him in cleaning up His Church and taking back souls from the kingdom of darkness without a demonstration of the power and glory of God. Friend, from the day man fell to our days no redemption plan has been properly executed without eternity invading time to compel darkness to submit.

IT TOOK THE INVASION OF ETERNITY INTO TIME FOR THE CHAOTIC AND VOID EARTH TO BECOME HABITABLE.

It took the invasion of eternity into time for Shem to become a principality of God after the flood.

From the Historic book of the Jews, he was the one who served as the preacher or prophet to that ancient world. In Judaism he is believed to be Melchizedek. But in Christianity we believe the pre incarnate Christ is Melchizedek. Both believes could be true because Christ may have entered Shem and fully manifest in him. Concerning this mysterious figure, the Bible says;

“FOR THIS Melchizedek, king of Salem [and] priest of the Most High God, met Abraham as he returned from the slaughter of the kings and blessed him,

And Abraham gave to him a tenth portion of all [the spoil]. He is primarily, as his name when translated indicates, king of righteousness, and then he is also king of Salem, which means king of peace.

Without [record of] father or mother or ancestral line, neither with beginning of days nor ending of life, but, resembling the Son of God, he continues to be a priest without interruption and without successor.” Hebrews 7:1-3 AMP

I believe Jesus formed Himself in whoever this man was and became the man. The same thing that should happen to us when we accept Christ – He should be so formed in us that we become one with Him.

That is when we stand justified before GOD! We become kings of righteousness and peace on the face of the earth like this mysterious figure.

The Bible indeed made it clear that Christ has made us kings and priests unto our God. But this redemption story attached to the Melchizedek figure tells us the kind of kings – kings of righteousness and peace.

The word king means ruler. God expects that we rule in righteousness and peace on the face of the earth after salvation. He expects righteousness to be our standard or garment.

THAT IS WHY WE LOOSE THE SCEPTER TO BE KINGS ON HIS BEHALF WHEN THERE IS NO RIGHTEOUSNESS IN OUR LIVES.

Righteousness is not just the source of our heavenly scepter but also the greatest defense of the justified – because God will always show Himself blameless to the BLAMELESS. David said,

“I was also blameless before Him, and I kept myself from my iniquity. Therefore the Lord has recompensed me according to my righteousness, according to the cleanness of my hands in His sight.

For you will save the humble people, but will bring down haughty looks.” Psalms 18:23-27 NKJV

Time has come to keep our garments pure! These are not seasons of defiling our garments. When we defy our garments, we loose the scepter of authority in the spirit realm. When we loose this scepter, we become like snacks to be eaten of the devil.

David so walked with God that he never lost that scepter. The only time it almost left his hands was in the sin of Beersheba.

The Bible made it clear that after three months of exile he returned to his throne. Sin will always take us away from our thrones in the Spirit. We can only be restored after returning to God in righteousness! But this entire story was made possible because it took the invasion of eternity into time for Melchizedek, the man with the story, to appear on the scene of God’s redemptive plans, and unlock the truths to us!

It is practically impossible for the Kingdom of God to advance effectively on earth without the invasion of eternity into time! When eternity invades time, it brings eternity products from the realm of glory into time.

MAJOR OUTBREAKS OF GOD HAVE BEEN MADE POSSIBLE THROUGH THE INVASION OF ETERNITY INTO TIME.

There are those who have so sold themselves to do evil even to holy man and women of God that it will take eternity to invade time to make a difference. Our devotional text this morning says;

The hearts of many in our age is so filled with gross darkness that many of them can no longer tell the difference between light and darkness!

Eternity need to invade time to help us out.

This inability to spot the difference is a great pain in the heart of the righteous that are being called evil by the children of the evil ones, the way Jezebel did to Elijah. Slandering GOD’s true prophets or people has always been a tool in the hands of the seed of the wicked one. But God said in His word,

“They shall be Mine,” says the Lord of hosts, “On the day that I make them My jewels. And I will spare them as a man spares his own son who serves him.”

Then you shall again discern between the righteous and the wicked, between one who serves God and one who does not serve Him.” Malachi 3:16-18 NKJV

Get set for a move of God that will help our generation to be able to spot the difference! That is the message of this devotional.

If you are being called what you are not like it has always happened to some of us, you may weep in secret for vindication like I always do but enhance your calm. Just make sure His garment of righteousness on you is intact. Do not stain it be stepping into the realm of the flesh. Maintain a right standing with GOD.

It will retain the scepter of authority in your hand and God will begin to vindicate you by doing things that will help everyone spot the difference. Persistent righteousness will always win over persistent wickedness. It is just a matter of time.

“For behold, the day is coming, burning like an oven, and all the proud, yes, all who do wickedly will be stubble. And the day which is coming shall burn them up,”

Says the Lord of hosts, “That will leave them neither root nor branch. But to you who fear My name the Sun of Righteousness shall arise with healing in His wings; and you shall go out and grow fat like stall-fed calves.

You shall trample the wicked, for they shall be ashes under the soles of your feet on the day that I do this,” Says the Lord of hosts.” Malachi 4:1-3 NKJV