“Many are the afflictions of the righteous, but the Lord delivers him out of them all. He guards all his bones; not one of them is broken.

Evil shall slay the wicked, and those who hate the righteous shall be condemned.

The Lord redeems the soul of His servants, and none of those who trust in Him shall be condemned. Psalms 34:19-22 NKJV 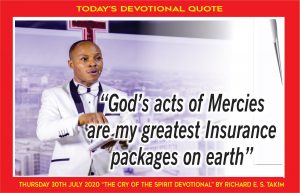 WELCOME TO THE 210TH DAY OF OUR YEAR OF REJOICING

Glory to the LORD God almighty – El Shaddai, the “All sufficient One” creator of Heaven and Earth. It is of His sufficiency that we are kept. His mercies are the greatest insurance package on the face of the earth.

As we prepare this morning to face the day, I want us to look at this beautiful Psalm from one of the greatest servants of God that ever lived on the face of the earth – David.

He was one righteous man who spent over 53 years of His life fighting the battles of the LORD. His core mandate was to locate where the Temple was to build and clear off all living around the area and that He did very well.

He said many are the afflictions of the righteous.

The first time I heard that scripture mentioned was in the mouth of my Spiritual Father. I thought the righteous cannot be afflicted until then. He spent time telling our little church then what he has gone through in life and ministry and how the LORD delivered him.

“Yes, and all who desire to live godly in Christ Jesus will suffer persecution. But evil men and impostors will grow worse and worse, deceiving and being deceived.” 2 Timothy 3:12-13 NKJV

Sometimes the many afflictions of the righteous are not generated directly by the devil but the impostors among us!

The worst attack you may face on earth, as a genuine child of God, could come from a so-called Christian, not even a demon. Yes, the greatest attacks we will face today as the End Time Church, will indeed come from impostors – people who look genuine but are really devils in God’s garment. You will find them in both the clergy and the laity.

JESUS CALLS THEM SNAKES, SCORPIONS, AND VIPERS BECAUSE OF THEIR CAPACITY TO ATTACK THE RIGHTEOUS SO SEVERELY.

I want to painfully say that it seems if we are going to live righteously in this age, we must be prepared for these attacks. The Bible makes it clear that this kind of attacks many, not few!

I have been plugged into many things in life and have also seen the LORD deliver me out of them all. That is where you fix your heart when you come under any kind of attack as God’s righteous seed on the face of the earth.

Fixing our heart strongly on the victories promised us during an attack of the enemy will boost our internal strength and give us the faith to connect the anointing and glory product we need, most time after the attack, to come out victorious.

God is a deliverer! You will never know that until you face an attack. He delivered Peter, Paul, and many of the great people of God in their days. He will also deliver you in your days.

Friend, the very portals He opened to deliver them in their days have not been shut down. They are still opened. They are portals of divine rescue. You will also experience same rescue. Yes, you will also state like David “but the lord delivers him from them all”

The next victory promised by the LORD says …He guards all his bones; not one of them is broken. This is especially important.

Our bones need to be guarded under an attack so that they will not be broken. This is also a messianic statement. On the way to the Cross, Jesus went through a lot but none of His bones was broken.

THE BONE PROPHETICALLY MEANS OUR SPIRITS OR CONDITION OF OUR HEARTS.

The greatest target of an attack on the righteous is their spirits.

Satan fears a man who is strong in spirit and will use every false Christians he can find around him to break his spirit. When his spirit is broken, it is very possible that everything God may be using the person to do will cease. And the devil will begin to prevail.

But the Bible says God guards all our bones (spirits) not one is broken! That is a victory code to fix your heart on during an attack.

The next victory promised by the LORD says …. Evil shall slay the wicked, and those who hate the righteous shall be condemned.

It is risky to make a wicked move against the righteous. Because the LORD will eventually slay those who do and make sure the righteous are not condemned. God is so mindful of His righteous seed that their persecutors and attackers do not really go free. His response could be slow in coming but it will finally come if there is no repentance.

So, if you are under any kind of attack, remain strong in the LORD, because His word says, “Evil shall slay the wicked, and those who hate the righteous shall be condemned.”

Sadly, the devil usually blind folds those he uses in attacking the righteous to this truth. He uses their hate to blind their eyes from seeing who these men and women really are in God’s sight. Remember Jezebel made Israel to believe Elijah was an evil to the nation of Israel.

In fact, they took him for a false prophet and took the prophets of Baal for true prophets. But God would later deploy His heavenly forces against them and eliminated them from Israel.

GOD WILL DEPLOY HIS FORCES TO HELP YOU, JUST HANG ON!

Those who are being used against you today will be condemned; their evil will slay them. That is where to set your mind on. The Bible says those who set their mind on these victory promises during an attack will be kept in perfect peace. Here are the promises again,

“Many are the afflictions of the righteous, but the Lord delivers him out of them all. He guards all his bones; not one of them is broken. Evil shall slay the wicked, and those who hate the righteous shall be condemned.

The Lord redeems the soul of His servants, and none of those who trust in Him shall be condemned”

Look at the last line closely, it says, “the LORD redeems the soul of his servants and none of those who trust in Him shall be condemned.”

The key word there is trust. It is important to maintain your trust in the LORD during an attack. Trusting in the LORD to do all He said He will do during an attack is the key to seeing His promised deliverance. That was why Jesus prayed that Peter’s faith remains strong in an attack God revealed was coming.

Our trust in God must remain firm until it connects us to the faith to turn the battle to the gate and obtain victory. It is my prayer that God will use these words to give you an inheritance among they that are sanctified.

“Commit your way to the Lord, Trust also in Him, and He shall bring it to pass. He shall bring forth your righteousness as the light, and your justice as the noonday.

Rest in the Lord, and wait patiently for Him; do not fret because of him who prospers in his way, because of the man who brings wicked schemes to pass.

Cease from anger, and forsake wrath; do not fret — it only causes harm. For evildoers shall be cut off; but those who wait on the Lord, they shall inherit the earth.