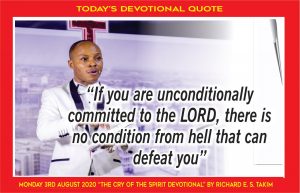 WELCOME TO THE 214TH DAY OF OUR YEAR OF REJOICING

I was wondering why the Holy Spirit descended upon the 120 disciples of Jesus Christ in the upper room and sat on their heads instead of their legs. Then one day the LORD opened my eyes to the truth.

One of the major losses humanity suffered from the fall of man is the loss of Heavenly wisdom. The Holy Spirit descended on their heads to show us the first emphasis of the Spirit – the restoration of the very mindset Adam had before the fall.

The Bible made it clear that when He comes, He will reveal to us all things, and that is what He has been doing since He came over 200 years ago. Which is why one who attends His schooling sessions is usually wiser than the most Educated person on earth.

He does not develop our minds from the curriculum of men. He develops our minds from the fountain of the depths of God. This He does, by comparing spiritual things with spiritual. He lives in hearts of the sanctified to guide them daily, giving us the wisdom from above – divine wisdom.

YOU SEE, ALL PROBLEMS OF MANKIND BEGAN FROM THE SPIRIT REALM.

Adam’s fall in the Garden of Eden was not a physical event, but a spiritual one. He fell in the Spirit’s realm and that resulted in all the problems we have as human beings.

The spiritual was designed to be the birthplace of the natural by God. For instance, if a man has not been killed in the spirit realm, no matter what happens to him in the natural realm, death will not be able to occur.

This could be too subjective to you, but I have heard of people who were involved in ghastly motor accidents that helpers certified them dead and took them to the mortuary only to meet them alive few days later. Death could not take them because they were not given over to it in the spirit realm.

What you have not been given over to in the spirit realm can never happen to you in the natural realm. Be it death, hell, or grave. It is the spiritual that determines what really happen to men in the natural.

THE WISDOM WHICH THE HOLY SPIRIT TEACHES IS IN TWO ASPECTS. THE PRACTICAL ASPECT AND THE SPIRITUAL ASPECT.

Our devotional text today holds one of the most ancient wisdom of God for dealing with spiritual problems.

I TRUST THE HOLY SPIRIT TO REFRESH OUR MINDS AS WE UNCOVER IT.

A major highlight from the text says,

“If Satan casts out Satan, he is divided against himself. How then will his kingdom stand?”

Now we all know that the kingdom of Satan is not divided against itself. So, when we look at the text therefore, we can conclude that “Satan cannot cast out Satan.” In dealing with spiritual problems therefore, we must understand this wisdom from the Ancient of Days Himself.

Let me share with you a bit about spiritual problems.

All spiritual problems are traceable to Satan himself. Even when the hand of a man is involved, he is the power behind that hand. That is why the Bible admonish us to love our enemies and not hate people the devil sway to move against us. We may hate their actions but not the people themselves. We must understand the warfare and still respond in love by the grace of GOD.

Except to execute correctional judgment, God is not usually the author of any crisis. Satan is the source of all evil. I think even a Child knows that. In dealing with spiritual problems therefore, you must learn to cast out Satan then teach the people to change the way their think, because when he leaves, all his works leaves with him.

I HAVE SAID IT BEFORE THAT THE WORD “SATAN” IS NOT ACTUALLY A NAME. IT IS A TITLE.

It means “opponent.” It is a title given to the fallen angel Lucifer who fell from glory and became the major opponent of God’s will, ways, and word. That was why when Peter opposed Jesus and tried to discourage him from going to the cross to die for us, (obviously because he was ignorant) Jesus called him “Satan” (or opponent).

But the ancient wisdom we are uncovering today says “Satan cannot cast out Satan.” That means if you we are opposing God’s will, word, or way in any way, we will lack the power to deal with Satan or any of His works.

Friend, the most effective way to deal with the devil is to spend your days leading a Christians life that is submissive and obedient to God’s will, ways, and word! That is true worship. True worship is total submission to all that is GOD. When God inhale it, he exhales His glory upon us, giving us all we need to neutralize the activities of Satan. The Bible says,

“Therefore submit to God. Resist the devil and he will flee from you. Draw near to God and He will draw near to you. Cleanse your hands, you sinners; and purify your hearts, you double-minded.” James 4:7-8 NKJV

I believe the message of today’s devotional is clear. The ancient wisdom for dealing with all spiritual problems has been uncovered, and that wisdom is simple. Be a true worshiper not a song leader and a noise maker in Christ!

True worshipers are submissive and unconditionally committed to Christ. The walk-in total obedience and synchronizes with God’s will, ways, and word.

The Bible says he is going about looking for whom to devour because he cannot devour everybody. If you are part of the breed in the Christian faith that worship God in Spirit and in truth by being submissive, willing, and obedient to do His blessed will no matter the cost, the devil cannot devour you.

You will not be an Automated Teller Machine (ATM) for any charlatan called prophet or any con woman wrapped in a prophetic anointing.

MAKE THIS SCRIPTURAL PASSAGE AN ADDITIONAL MEDITATION FOR TODAY.

If you are willing and obedient, you shall eat the good of the land; But if you refuse and rebel, you shall be devoured by the sword”; for the mouth of the Lord has spoken.” Isaiah 1:18-20 NKJV