“You are My friends if you do whatever I command you.”

“No longer do I call you servants, for a servant does not know what his master is doing; but I have called you friends, for all things that I heard from My Father I have made known to you.”

“You did not choose Me, but I chose you and appointed you that you should go and bear fruit, and that your fruit should remain, that whatever you ask the Father in My name He may give you.” John 15:14-17 NKJV 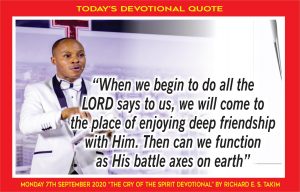 WELCOME TO THE 249TH DAY OF OUR YEAR OF REJOICING

“…. Fear God, and keep his commandments: for this is the whole duty of man. For God shall bring every work into judgment, with every secret thing, whether it be good, or whether it be evil.” Ecclesiastes 12:13-14

The central focus of people living between their birth days and death days, should be to fear God and depart from evil. Yes, it should be to spend every moment of their lives harmonizing themselves with the will and ways of God in all fronts.

Obviously, we live in a season where so many people including Christians, live their lives extremely far from God’s will and ways. We live in a season of great moral decay. If the LORD has not left us a remnant, we would have become like Sodom and Gomorrah. It is the remnant that is withholding judgment from falling.

THESE SEVEN THOUSAND OTHERS WHO HAVE NOT BOWED THEIR KNEES TO BAAL OR KISSED HIM ARE THE HOPE OF THE REDEMPTION OF OTHERS.

However, there is a remnant that is still pure and holy, holding on to the true faith that was found in our fathers. I mean there are genuine apostles and prophets, Evangelists, pastors, and teachers by content, who are not driven by the Love of money, the deceitfulness of riches, or the cares of this world.

There are still ministers of the gospel who do not ask seed for prayers, give people oil to drink, water to use in prayers or curse those who do not bring tithe. There is a crop of genuine Elijah and Apostle Paul in our generation whose passion is to return hearts back to the one and only true God, Jesus Christ; and build men into temples for God in the Spirit.

Like I said, these men are not apostles, prophets, evangelist, or pastors by titles. They are all that by content.

Yes, there are Christians who are still maintaining the standards of Holiness and holding the banner of righteousness even in their workplaces. Though this breed has always been very few in every generation, God will always have a remnant in any perverse and crooked generation.

He said in His word;

“Yet I have reserved seven thousand in Israel, all whose knees have not bowed to Baal, and every mouth that has not kissed him.” 1 Kings 19:18 NKJV

In the same way, the HOLY NATION under the command of Jesus Christ, King of kings and LORD or lords, has its own reserves. So when God said “I have reserved seven thousand in Israel, all whose knees have not bowed to Baal, and every mouth that has not kissed him” He was speaking about His reserved combatants soldiers in the camp – a generation that can be activated at any time to respond in battle.

THAT IS THE MYSTERY ABOUT THE REMNANT.

I believe strongly that God has reserves across the nations of the earth in our generation as well. People that can be mobilized at any time to give proper response to the enemy, when those in the forefront either betray God for fame and fortune, join side with the anti-Christ, falls to the sword of the flesh like Samson did, becomes weary in battle, or even die.

Some of us are part of God’s reserves, mobilized when those in the forefront fell to some of the things mentioned. That is why we must be incredibly careful, because the devils that dealt with them are still here. We must remain humble under the mighty hand of GOD, and tremble at the same time each time He uses us to do a thing.

God went on to instruct Elijah to pull out three people from the reserves, to train and mobilize for the battle against Baal and its team. He pointed out Hazael, Jehu, and Elisha and said to him,

As earlier stated, our Church generation has its own reserves.

Prophetically, God has called men and women with the Spirit of Elijah to locate these reserves, call them together, mobilize and activate them, then commission them to take battle positions in the kingdom, and be God’s earthly force for the execution of His redemption plan for the end time.

The Cry of the Spirit ministries here in Nairobi is a place for mobilizing God’s reserves. We preach and reach out to the nation to locate God’s reserves in the Church, for the purpose of mobilize them with truths, and activating them with uncommon grace from the LORD, who sent us.

These reserves of the Almighty God will be commissioned by Him and assigned their God given battle positions in the spirit at their appointed times. Those who have attended our meetings can testify that they are not just Church services but kingdom advance mobilization training meetings.

THAT IS WHY WE DO NOT MAKE SENSE TO EVERYBODY.

We make sense only to God’s reserves in the Church – the seven thousand who have not bowed their knees to Baal or kissed him. If you are reading this as one of God’s reserves, permit me to bring a major highlight in our devotional text to you. It says,

“You did not choose Me, but I chose you and appointed you that you should go and bear fruit, and that your fruit should remain, that whatever you ask the Father in My name He may give you.”

I want you to personalize this scripture. I believe you are going through this word this morning as part of God’s reserves in the present Church.

He said you have not chosen Him; He has chosen you. And that the vision is for you to bear fruit and that your fruit should remain. Then if that fruit remain, you will begin to operate in the grace of divine attention. Then, you can ask God anything in His name and it will be done.

But what fruit was God talking about? Apart from the fruits of the Spirit, He was also referring to another kind of fruit; a life that is in synchronicity with His will and ways. All of God’s reserves must come to the revelation of these things. That is why we have our 50 DAYS WINGS OF THE SPIRIT.

There are devils to push out of places, there are Baals to cut off from the lips of men and women in the Church and the world. If you are a remnant by content, GOD has chosen you to do His will. He said you are His friend if you will do all He says to you.

When we start doing all He said to us, that is when we will begin to enjoy deep friendship with Him and functioning as His battle axe on earth! Are you ready?

MAKE THIS SCRIPTURE AN ADDITIONAL MEDITATION FOR TODAY