“But I will gather the remnant of My flock out of all countries where I have driven them, and bring them back to their folds; and they shall be fruitful and increase.

I will set up shepherds over them who will feed them; and they shall fear no more, nor be dismayed, nor shall they be lacking,” says the Lord.

“Behold, the days are coming,” says the Lord, “That I will raise to David a Branch of righteousness; A King shall reign and prosper, and execute judgment and righteousness in the earth.

In His days Judah will be saved, and Israel will dwell safely; Now this is His name by which He will be called: THE LORD OUR RIGHTEOUSNESS. Jeremiah 23:3-6 NKJV 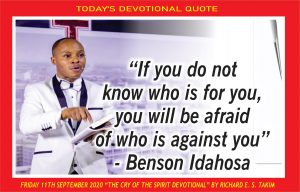 WELCOME TO THE 253RD DAY OF OUR YEAR OF REJOICING

The mercy and grace of our God has been the secret of our survival this year. It has not given us to the will of our enemies and all who rose against us. If it was not the LORD who has been on our side, men would have swallowed us up when they rose against us!

One of the major blessings God bestows on His own, is the blessing to have a table in the presence of our enemies. The blessed of the LORD are usually surrounded by the LORD’s host, most times to protect us from the evil one and his host. However, there is a talk about enemies today that is more of a panic talk.

So many do not know who is for us, hence operating in fear of who is against us. Satan has used our ignorance of God and placed most of us in panic modes, resulting in us talking fearfully about him and what he is doing!

You see, talking about “the enemy, enemy and enemy” is more of a sign of illiteracy in the things of God. Knowing God exhumes peace, calmness and boldness from a man. It makes the enemy too small to be made the center of a Sunday service or prayer meeting. He becomes “a thing of no concern”. People who talk about God will not cease seeing his acts and amazing things.

Friend, Jesus is real! He is not a myth. He is God! It is when you look for Him in wrong places that He appears to be a myth to you; because you will never see Him. Jesus cannot be found in wrong places so you will never see Him in a City of Refuse preachers call Church. He can only be found in His Cities of Refuge or synagogues of Satan scattered across the nations of the earth.

THE PRECIOUS SOULS THAT GOD IS SETTING FREE IN OUR APOSTOLIC CENTER WERE IN PLACES THEY THOUGHT WERE CITIES OF REFUGE.

But all their days in such places made them more miserable. And the reason for that is simple; Christ is not there! It was just the mentioning of the name “Jesus” that was there; the presence and glory of Christ was not there. What you must know is this, the name of the LORD, without the presence of the LORD, will not save or change anyone

God in His mercy and kindness came into the lives of these precious souls and gathered, and then pushed them out of where they had been, through many Circumstances, and brought them to “His City of refuge.” I want to counsel you to get our message titled, “YOU NEED A CITY OF REFUGE AND NOT A CITY OF REFUSE”

The Bible made it clear that when you get to a City of Refuge, every avenging demon in your life will no longer hold you sway. So when they got to where Christ is they were delivered from the works of their enemies. That is the Jeremiah 23:3-6 prophecy manifesting. A major Highlight of the text says,

“But I will gather the remnant of My flock out of all countries where I have driven them, and bring them back to their folds; and they shall be fruitful and increase.

I will set up shepherds over them who will feed them; and they shall fear no more, nor be dismayed, nor shall they be lacking,”

You cannot be free indeed from any harassment of the Devil or become what God has created you to be if this prophecy is not fulfilled in your life. Contained in this scripture are basic ways God minister to His lost sheep.

First of all, when a sheep is lost it becomes a victim of satanic attacks. When it is not in its fold, it is exposed to all kinds of adversity without deliverance. If eventually it runs into what look like a Church but not really a Church by God’s definition, it will still not be saved.

IT COULD HAVE RELIEF BUT NOT REST.

The hireling will then be exploiting it of money and all it can. But Jesus said “I will gather the remnant of My flock out of all countries.” What the Bible termed as “all countries” in this prophecy are, in simply terms, countries or cities of spiritual refuse with the outlook of a Church that people do run to for help.

However, the word of the LORD must get to them before they can be rescued.

Sadly, synagogues of Satan are everywhere, making the loudest noise and putting up the largest “man of God” signs and outlook; causing the naïve and ignorant to be carried away so easily! But God wants His sheep in all countries (Churches) that are merely Cities of Refuse gathered unto Him.

He wants them established under Him as their shepherd by the hands of spiritual leaders that will let that happen – shepherds who will feed them until they get to a realm where they will fear no more or be lacking. Not shepherds who will curse them for not tithing or for leaving their churches, or threaten them not to leave their empty Churches!

Friend, something is happening! We must rise from ignorance and start checking ourselves by our fruits not by our noises, claims or sign posts.

In the kingdom it is not by claims, noise or sign boards that we are known but by our “fruits.” It’s not Charisma but Character. Satan has intimidating charisma but has no character. If you see a Christian or preacher that fits this description, you have just seen Satan in the flesh. Jesus said by their fruits we shall know them.

THE FRUIT SUCH CHURCHES WILL BEAR IN YOUR LIFE WILL BE TERRIBLE.

There will be no words to describe what your life will become over time, when these terrible churches are through with anyone.

I have heard very sad stories of what the sheep of Jesus are going through under some preachers that are simply devils in God’s garment. People have tearfully narrated how they were cursed and given few days to live simply because they freely joined and want to freely leave a Church.

A church that is led by a spiritual leader who uses words like “I have to release you before you leave this place or else…” and other related cult terminologies, is not an Assembly of God but an Assembly of Satan.

The statements alone show that you are not in a Church but a cage. And your so called father in the LORD is the cage master. In fact, you are the bird. Until he releases you, you are not permitted to leave. NONSENSE! That is charismatic witchcraft.

What is the message of our devotional this morning? The message is simple; you do not need one more moment in a City of refuse you call Church.

There is a move of God that is pulling His own out of spiritual cages, crowds or cities of refuse we call Churches. The primary goal is to bring us under one Shepherd Jesus Christ. Until this move is fulfilled in your life as a Child of God you will never have rest in life!