“To me, who am less than the least of all the saints, this grace was given, that I should preach among the Gentiles the unsearchable riches of Christ, and to make all see what is the fellowship of the mystery, which from the beginning of the ages has been hidden in God who created all things through Jesus Christ;

to the intent that now the manifold wisdom of God might be made known by the church to the principalities and powers in the heavenly places, according to the eternal purpose which He accomplished in Christ Jesus our Lord, in whom we have boldness and access with confidence through faith in Him.

Therefore I ask that you do not lose heart at my tribulations for you, which is your glory. Ephesians 3:8-13 NKJV 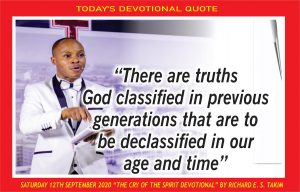 WELCOME TO THE 254TH DAY OF OUR YEAR OF REJOICING

We are already sailing some trouble zones in the spirit realm as humans. The earth is experiencing a terrible traffic in the spirit realm. Beings are moving from hell to the earth in alarming proportion – they are almost jamming themselves because of the urgency that the evil one has placed on them.

These things could be weird or even strange to you but are very real. The devil is doing all that because of the shortness of the time that is still left for his final judgment. The Bible says,

Therefore rejoice, O heavens, and you who dwell in them! Woe to the inhabitants of the earth and the sea! For the devil has come down to you, having great wrath, because he knows that he has a short time.” Revelation 12:12 NKJV

Friend, only the devil really knows how short his time has become in our generation; hence the massive deployment of forces from hell to the earth.

He is deploying forces to the earth, specifically the systems of this world and all that is not founded in divine will. The Church is not even left out in this massive deployment of the satanic regiment from hell. The reason is simple; a lot in so many Church circles are not founded in God’s will.

One of the massive forces he has deployed have been sent to the pulpit (the clergy) and pews (the laity) of most departments of the present Church. There are those in the religions of this world, but my concern is the Church because that is my constituency.

The enemy is raising very terrific, accurate but false prophets on the continents of our sin infected world, especially Africa. There was a time that South Africa was the worst hit.

THOSE WHO GOD EXPOSED SOME OTHER PLACES, RAN THERE TO FESTER AND HAUNT FOR SOULS.

Sadly, East and West Africa are not left out! Today, West Africa has become the training ground of these army of Satan. Wrapped in garments of flamboyancy, armed with lips of accurate prophecies by the power of sorcery many call prophecy, these special forces of hell, are stealing the minds of the naïve and gullible.

Friend, there is a complete repetition of the ministry of the sorcerer in Acts chapter 8 in our generation. Concerning this pseudo prophet, the Bible says;

“But there was a certain man called Simon, who previously practiced sorcery in the city and astonished the people of Samaria, claiming that he was someone great, to whom they all gave heed, from the least to the greatest, saying, “This man is the great power of God.”

And they heeded him because he had astonished them with his sorceries for a long time. Acts 8:9-12 NKJV

Child of God, there is a second coming of ancient devils in our generation. They Copy paste so they can establish their deceit in the hearts of men. I remember sharing about the mystery of evil patterns in our ongoing 50 Days Wings of the Spirit. We saw how the enemy can get into the patterns of GOD, draw them in earth to establish his evil works. That is the real evil pattern, not the one preached by so called deliverance ministers.

Three major areas the ministries of some of these false prophets and prophetesses flow is in the area of marriage, money and deliverance.

They lead NEED BASED MINISTRIES and tailor their prophecies according to the carnal needs of people, thereby having a lot of crowds that gather around them calling in worship and adoration, calling them “great power of God!”

Whenever I see such crowds and naïve people around the Simon the sorcerers of our generation, I see how huge hell is enlarging itself, and how populated the way that lead to eternal damnation is! But God also has program – a redemptive program for these precious Souls. Yes, as we are seeing in our ongoing School of fat things, there is a move of God to deliver those who are trapped in “Broad Way Gospel Ministries.”

DUE TO THE NATURE OF THE SPIRITUAL WAR, MOST OF THESE MOVES ARE CLASSIFIED.

If you are wondering if God has classified information in His kingdom, here is a scripture that will help you discern the right answer to that. The Bible says;

“The secret things belong unto the Lord our God, but the things which are revealed belong to us and to our children forever, that we may do all of the words of this law.” Deuteronomy 29:29 AMP

The secret things that belong to the LORD are the classified revelations from Heaven that sometimes He will share with few ears and tell them “Seal it till the time appointed for the Father.” The Bible says such revelations belong to the LORD. But the ones that are DECLASSIFIED or REVEALED belong to us the Sons of the Kingdom, and our families.

They are revealed so that we may do the words contain in them!

Speaking about the reality of the existence of these things in Christ, Paul wrote to the Church at Corinth saying;

“To me, less than the least of all saints, has this grace been given, to announce among the nations the glad tidings of the unsearchable riches of the Christ, and to enlighten all [with the knowledge of] what is the administration of the mystery hidden throughout the ages in God, who has created all things, Ephesians 3:8-9 Darby

This is a rendering of a portion of the Darby translation taken from our devotional text today – a scriptural text that reveal the possibility of coming into things that were hidden from a previous generation, primarily to be revealed or declassified in a current generation.

Paul woke up to this reality, and became a custodian of revelations that were concealed from previous generations, to be unsealed in his generation.

THAT WAS ONE OF THE REASONS WHY HE SUFFERED MORE THAN ALL OTHER APOSTLES.

The life of a custodian of the quality of truth he carried, is not always smooth. That is why we find very few people in every age carrying rare spiritual truths. The price is always very heavy to pay. It involves dying daily for the life of God to be made manifest through you.

I submit to you that the heaviest things to carry, is a heavenly treasure dispatched for the earth. However, no matter the weight, each generation must wake up to things that are hidden from previous generation for them. Until that happens, they will not be able to unleash their God given destiny accurately.

Moses had to get what was hidden for his age and time declassified before moving from being the adopted son of the daughter of Pharaoh, to becoming a Son of GOD. He became the first, and maybe the only mortal man to have literally spoken to GOD face to face apart from Enoch and Elijah.

That tells me that no matter the friendship between a man and GOD, if certain things are not for his generation, God will not reveal them to him. I remember understanding this when I asked the LORD to reveal what He was showing me to the fathers of faith in my nation. It was like a Samuel in Eli’s house experience.

In my finite reasoning, it would bring the reformation He was talking about faster. Now I know, Abraham, though friend of GOD, was not allowed to know Him as Jehovah. He just knew Him as God almighty. The Bible says;

“ And God spake unto Moses, and said unto him, I am ||the LORD: 3 And I appeared unto Abraham, unto Isaac, and unto Jacob, by the name of God Almighty, but by my name JEHOVAH was I not known to them.” Exodus 6:2-3 KJV

Moses was one man who tapped into a system of divine communication reserved only for those who step out of their mortal bodies while in his mortal body.

HE TOUCHED THINGS THAT WE MAY NEVER TOUCH UNTIL WE GET TO THE PARLEY GATES OF HEAVEN.

Friend, there are no words to describe the glorious things we will tap into in Christ Jesus, if we come into the revelation of things hidden from previous Church generation for our generation. That was the plane that Moses stepped into to become like God to Pharaoh. Don’t forget, when God elevated Him to that plane, He said to Him;

“See, I have made you as God to Pharaoh, and Aaron your brother shall be your prophet (Exodus 7:1 NKJV)!

That is why it is unwise for any one among the older generation not to accept a truth from a younger generation.

So many truths in scriptures are wrongly presented by the older generation of our age and time. If you allow their age or wealth to serve as the validity of the accuracy of what they may be teaching or preaching, you will be lost.

You will never become AS GOD TO THE PHARAOHS of this age, or slay the giants you are born to slay, until you come into the revelation of scriptural truths that GOD hid from passing fathers of faith.

I APPEARED TO ABRAHAM, TO ISAAC, AND TO JACOB, AS GOD ALMIGHTY, BUT BY MY NAME LORD I WAS NOT KNOWN TO THEM.

I have also established My covenant with them, to give them the land of Canaan, the land of their pilgrimage, in which they were strangers.

I will take you as My people, and I will be your God. Then you shall know that I am the Lord your God who brings you out from under the burdens of the Egyptians.

And I will bring you into the land which I swore to give to Abraham, Isaac, and Jacob; and I will give it to you as a heritage: I am the Lord.'” So Moses spoke thus to the children of Israel; but they did not heed Moses, because of anguish of spirit and cruel bondage. Exodus 6:1-9 NKJV