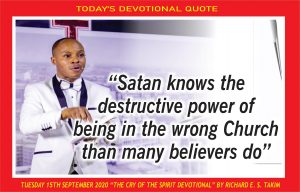 WELCOME TO THE 257TH DAY OF OUR YEAR OF REJOICING

How do we get the mind of Christ to fully comprehend the things of GOD? How do we move from walking in the flesh to walking in the Spirit? We need a constant impartation of the word and the Spirit of GOD for that to happen.

It’s being our season of schooling in the things of God. And as we take a quiet but steady march towards our day of final redemption, GOD has a word for us today as always.

Today Heaven will help us to look at the power of environment in our walk and talk with GOD.

To start with, we are described as seeds. If you genuinely give your life to Christ, and become a temple of God in the Spirit, are a righteous. Sadly, many of us in the Christian faith are yet to come into the revelation, especially the revelation of our seed nature in Christ.

The truth is, true salvation encounter transforms. It transforms a man through the washing and regeneration of the human spirit by the power of the Holy Spirit. The Bible says,

“But when the kindness and the love of God our Savior toward man appeared, not by works of righteousness which we have done, but according to His mercy He saved us, through the washing of regeneration and renewing of the Holy Spirit,” Titus 3:4-6 NKJV

If your salvation was based on a mere “decision” instead of an “encounter” you are not safe. Genuine salvation encounter transforms.

IT TRANSFORMS A SINNER FROM THE SEED OF THE WICKED TO THAT OF THE RIGHTEOUS.

The media, the society in general; the universities, the colleges, the policies of the government of nations, and sadly even the Church today – all these are full of influences that fertilizes the seed of the wicked one to grow. They do not have the moral strength to fertilize the seed of the righteous to grow and take root. In fact, they kill it.

That is why God warned all seed of the righteous in His word saying;

THAT BRINGS US TO THE ISSUE OF ENVIRONMENT AGAIN.

The most important need of a seed is a good soil. The seed could be great potentially, if the soil is bad, it will die and decay. When the seed of the righteous decays spiritually, it begins to live in sin, trespass or iniquity without the restraining or convicting power of the Holy Spirit.

One major purpose why the Bible warns against friendship with the world system is, it has a way of planting us in the soil of the fields of this world, leading to spiritual death and decay.

Child of GOD, the fields of the world today have become so corrupt and very good to grow the seed of the wicked one. If the seed of the righteous will ever grow and flourish, it must discern the ground GOD has determined that it be planted and plant himself or herself there until destiny is fulfilled. The Bible made it clear that,

“The righteous shall flourish like a palm tree, he shall grow like a cedar in Lebanon. Those who are planted in the house of the Lord shall flourish in the courts of our God. They shall still bear fruit in old age; they shall be fresh and flourishing,” Psalms 92:12-14 NKJV

The courts of our God in the future is the judgment seat of Christ, where we will one day stand before Him to be eternally rewarded or reproved for the work we did while here on earth. Meaning, as the seeds of the righteous if we are not planted in the soil God designed that we be planted in this life, we will not flourish when we all stand in the courts of our God in the next life.

This is what makes attending the wrong church eternally dangerous. The soil god designed that we be planted in is called “the house of God”

Yes, there are many false Churches but that has not erased the importance of belonging to a true local Church HEADED by God fearing men or women – local Church with the House of God content (which is not a building but the place of God’s manifest presence).

God’s greatest vision is to use our present life to prepare us for the next life. The present life is like a vapor compared to the next life where we will be. Planting yourself in the wrong Church as the righteous seed, will prevent you from flourishing in the courts of our God, either in this life or the life to come.

The Bible says, “Those who are planted in the house of the Lord shall flourish in the courts of our God. They shall still bear fruit in old age; they shall be fresh and flourishing…” Bringing forth fruit in Old age” denotes flourishing in this life, and all that is tied to where the SEED is planted.

No right seed in wrong soil can ever flourish. It may put in its best, if the soil is bad, it will remain a misery. It will never flourish. This is a mystery that has remain hidden from so many struggling fellows. They blame people or other factors for things created by the spiritual soil they choose for themselves.

For instance, if you plant yourself in a metaphysical cult called church, you will never flourish. If the righteous seed plants itself in a political party, money making machine, social club, or a place of theatrical performance called church, he will not flourish in the courts of our GOD.

A SEED OF THE WICKED ONE MAY FLOURISH IN THE WRONG CHURCHES, BUT THE SEED OF THE RIGHTEOUS ONE WILL NEVER.

That is why the first thing GOD gives a genuinely saved person is a pastor after His heart and a church to function as a good ground for him. If this two are missing in your life and your salvation is genuine you will never flourish in life.

Only false Christians (seeds of the wicked one) flourish under perverted pastors or in wrong Churches.

That brings us to our devotional text. It says, “My soul has dwelt too long with one who hates peace. I am for peace; but when I speak, they are for war.”

If your soul dwells with people who hate righteousness, peace and joy in the holy ghost, you will never flourish. Even when you mean well, they will fight you. It is going to be to you what it was with Lot – Abraham’s Nephew.

Remember he separated from Abraham and dwelled in the Land of Sodom. When time commented over his decision, he lost everything including his wife. His daughters would later make him commit an abomination by impregnating them both.

A righteous seed in the wrong soil will indeed loose its spiritual quality. Talking about the spiritual travail of Lot while in Sodom, the Bible says,

“And He condemned to ruin and extinction the cities of Sodom and Gomorrah, reducing them to ashes [and thus] set them forth as an example to those who would be ungodly;

And He rescued righteous Lot, greatly worn out and distressed by the wanton ways of the ungodly and lawless” 2 Peter 2:6-7 AMP

Eschatological, we shall be rescued like Lot was one day from a failing world, through the rapture of the Church. However, prophetically we see a pattern of what we go through if we plant ourselves in the wrong soils as God’s righteous seed. We will be distressed by the wanton and wicked ways of the ungodly and lawless, leading to strife and dissatisfaction.

THAT ALONE CAN DESTROY ONE’S RELATIONSHIP WITH GOD.

That is why it’s better not to be in the wrong place than to be, hoping that things will change. Friend, nothing can change the devil, or whatever comes from him; not even time. He is the one that will change you if you plant yourself in his territory.

If you are in the wrong place hoping things will change, and you begin to see things appearing to be changing, you are the one that have changed by becoming a seed of the wicked one, hence enjoying the peace. Nothing has really changed!

This message is a wake up call! Any righteous seed planted in the wrong soil must consider the word of the LORD this morning and begin to take steps.

The most important thing in the life of a seed is the soil. Where you are planted as God’s righteous seed, is what determines how your life turns out. Do not be carried away be the outlook of Churches and men of God, or the people you may be involved with. It is not their looks that affect us. Someone said “looks cannot killed.”

Let GOD speak to you about the character content of the people around you. If there is no glory among them – I mean the fullness of God on display, that is the wrong place to plant yourself. Let the story of Lot be your guide!

LET THIS SCRIPTURE BE AN ADDITIONAL MEDITATION FOR YOU;

“And Lot lifted his eyes and saw all the plain of Jordan, that it was well watered everywhere (before the Lord destroyed Sodom and Gomorrah) like the garden of the Lord, like the land of Egypt as you go toward Zoar.

“Then Lot chose for himself all the plain of Jordan, and Lot journeyed east. And they separated from each other.

Abram dwelt in the land of Canaan, and Lot dwelt in the cities of the plain and pitched his tent even as far as Sodom. But the men of Sodom were exceedingly wicked and sinful against the Lord.” Genesis 13:10-13 NKJV