speaking lies in hypocrisy, having their own conscience seared with a hot iron, forbidding to marry, and commanding to abstain from foods which God created to be received with thanksgiving by those who believe and know the truth.

For every creature of God is good, and nothing is to be refused if it is received with thanksgiving; 5 for it is sanctified by the word of God and prayer. 1 Timothy 4:1-5 NKJV 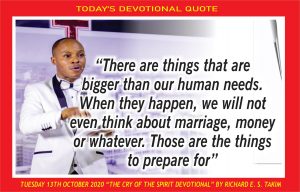 WELCOME TO THE 285th DAY OF OUR YEAR OF REJOICING

We give God the praise for His great mercies upon our lives and marvelous works. We thank Him for not dealing with us according to our sins, but according to His tender mercies. David said.

“As a father pities his children, So the Lord pities those who fear Him. For He [a]knows our frame; He remembers that we are dust.

As for man, his days are like grass; As a flower of the field, so he flourishes. For the wind passes over it, and it is [b]gone, and its place remembers it no more.” Psalm 103:13-16 NKJV

We are in the end times. Some of the pressures we are going to face will come from unexpected ends. People and places we do not expect will become great tools for demonic pressure to depart from the ways of the LORD. But the LORD knows our frame and will always supply mercies to help us out of these things.

As I look at other fields, I see many of God’s warriors of righteousness being pressured beyond measure, and some helplessly falling into ditches they never thought they could fall. So many of us that are fighting the battles of the LORD are in situations that no one, I mean no one can minister to us.

To minister means to serve; no one has what it takes to serve these men and women of GOD in the front lines. It is easier to serve a regular church member but difficult to be of help to people in the frontlines of God’s end time moves. It will take spouses, blood relatives, close confidants, and friends moving in the Spirit or trained by the LORD to do so to serve them.

Maybe, someone need to ask the LORD this morning to train him or her to become a servant of someone in the frontlines of His end time battles for the rest of his or her life on earth.

Warriors of righteousness fall sometimes, simple because they are neglected. They look so strong to onlookers because the LORD’s strength is usually made manifest in and through them. But they are feeble men like David was, and men who need great service or ministration like Paul.

Sometimes they are like Abraham who was surrounded by servants who could go to war with him, but a wife who could push him into what we know today as adultery.

I have a question this morning, what are you doing to be of help to any warrior of righteousness in the frontline of end time battle? What are you doing to contribute to helping them to be strong in the LORD? We expect so much from them and put them under pressure until they cave in and fall.

AND WHEN THEY DO, WE BLAME THEM FOR IT, CALLING THEM NAMES.

When we blame them and call them names, we come under the judgment of the LORD for being cruel to His men at the frontlines or forefront of the hottest battle against hell.

I am going through a great pressure. It has been for many months, but I have not found any that is helping me. Everyone in my life mounts pressure on me to see what they can extract from me, emotionally, spiritually, financially, and etc. None is giving me back. We forget that when you withdraw from an account without giving back, it will be depleted.

This is more than giving back an offering for the word heard. It’s deeper my friend. While some are so stingy not to even give back an offering, others keep withdrawing, and withdrawing until the warriors caves in and falls flat and dies either spiritually or even naturally.

You must know how to give back, else the man or women becomes depleted and cave in. But almost all only know how to withdraw and not how to make a deposit. Withdrawal without deposits depletes and account. You should know that. That is why God strongly admonished that we minister back to those who minister to us, else they deplete and cave in to the evil one.

When I look around me today, everyone close, far or near, seems to be plagued with spiritual cruelty, not mindful of the rigors of being in the frontlines that am going through. I pray I do not cave in and fall finally, because bad things are already happening.

I KNOW THIS IS THE SAME FOR ALL WARRIORS OF GOD IN THE FRONTLINES.

If am going through these things, I believe they are going through it also. Reach out and minister back to them, else we all cave in and die spiritually, living all who so desperately needs us on our feet in the hands of the wicked one.

If you are a true Child of God as you claim, know that part of the rumblings of the Holy Spirit to you this morning is to wake up from spiritual cruelty and become helpful to a man or woman in the frontline of God’s end time battle.

Yesterday we spoke about tithing; today we are going a step further.

There are things that are bigger than our human needs. When they happen, you will not even think of marriage, house rent, food, clothing or any other physical thing.

I feel strongly that something catastrophic is about happening in our present Generation as a sign that our redemption is drawing near! Though I sense a short time of peace coming to the nations (peace from the LORD that will allow us to reap in some souls into the kingdom, and perfect the saints for our general home going), the worst of world History is not behind us, but ahead of us.

Our devotional text today is extremely prophetic. It is a “rumbling of the Spirit” that warns us of the times we live in as Children of God.

I have come to discover that if we do not pay attention to “the rumblings of the Spirit,” we will rot when the things the Holy Spirit might be rumbling about begin to take place. A major highlight of it says,

Speaking lies in hypocrisy, having their own conscience seared with a hot iron,” 1 Timothy 4:1-2 NKJV

These are the very times this scripture was talking about! There are doctrines of devils everywhere today, consequently many have departed from the faith and have delve into real occult and money spinning practices.

From the doctrines of first born to the doctrine of evil altars, evil patterns, using of sand, Candles, salt, and etc. to pray, or carrying prophets to one’s village to uproot some things, and to all sorts of things. A large number of people no longer go walk with the true God because of these things.

THERE IS A GREAT DEPARTURE FROM THE FAITH!

Today there are certain local Church Assemblies that you must withdraw your feet from if you really want to make Heaven.

These Church ministries look like Churches outwardly but they are just crowds by spiritual content. They major on earthly things at the expense of the eternal. They do not labor in the word and doctrine until Christ is formed in people!

Consequently, if something is not done quickly, the last seconds of these last days will meet so many acclaimed Christians unprepared to spend eternity with Christ. They will be like the five foolish virgins who did not carry enough oil in their lambs, and when a cry for the Bridegroom’s arrival was sent they were not ready to meet Him.

Child of God, are you ready to meet your King?

If God should withdraw His restraining force and allow Russia and the United States to start unleashing their nuclear weapons on themselves (you know it will touch every nation under Heaven), will you be ready to go meet your LORD and KING in eternity? Will we be ready to see His blessed face or we will be afraid of judgment?

When you hear of eternity and coming judgment, does it fill your heart with fear or does it filled it with peace? Do we have sufficient Oil to sustain us every day?

When I say “Oil” I am not referring to the anointing Oil in battles or Jars but the works of the Holy Spirit in your life. Do you have enough works of the Spirit to sustain you these end times? I leave you with these thoughts!

NOW, HOW DO WE KNOW WHEN OUR OIL IS NOT SUFFICIENT?

The same thing happens when a warrior in the frontline is caving into pressure and dying gradually. Carnality will begin to rule our lives, the passions of our flesh will begin to influence our decisions. Some will even go very far, driven by hate, the carnal passions of the flesh, pride, lust, sexual desires, and all kinds of filthiness of the flesh and spirit.

When these things start happening, it’s a sign that you are beginning to die. Your oil is not sufficient!

It’s my prayer that the LORD uses these devotional to improve your walk and talk with HIM and also stir you to reach out to any warrior of righteousness in the frontline, and begin to make deposits where you have been withdrawing virtues from. Amen

MAKE THIS SCRIPTURE AN ADDITIONAL MEDITATION FOR TODAY;

But while the bridegroom was delayed, they all slumbered and slept. “And at midnight a cry was heard: ‘Behold, the bridegroom is coming; go out to meet him!’

Then all those virgins arose and trimmed their lamps. And the foolish said to the wise, ‘Give us some of your oil, for our lamps are going out.’

But the wise answered, saying, ‘No, lest there should not be enough for us and you; but go rather to those who sell, and buy for yourselves.’ And while they went to buy, the bridegroom came, and those who were ready went in with him to the wedding; and the door was shut.

“Afterward the other virgins came also, saying, ‘Lord, Lord, open to us!’ 12 But he answered and said, ‘Assuredly, I say to you, I do not know you.’

“Watch therefore, for you know neither the day nor the hour in which the Son of Man is coming. Matthew 25:1-13 NKJV