“I will make a covenant of peace with them, and cause wild beasts to cease from the land; and they will dwell safely in the wilderness and sleep in the woods.

I will make them and the places all around My hill a blessing; and I will cause showers to come down in their season; there shall be showers of blessing.” Ezekiel 34:25-26 NKJV 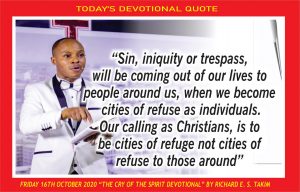 WELCOME TO THE 288th DAY OF OUR YEAR OF REJOICING

Ordinarily, a saved and sanctified person ought to be a city of refuge for the lost world, where they run to him or her and receive salvation, healing or deliverance from the presence of GOD that dwells in him or her.

When a Child of God function as a City of refuge, he or she becomes like an oasis of love wherever they live, work, or come from.

Heaven will be counting on that Child of GOD to bring the Kingdom of GOD down to anyone they relate with who have not found the kingdom; be it their husband, wife, daughter, boss, neighbor, friend, business partner, lecturer or etc. It is when we function as cities of refuge for the dying world around us that we become individual centers of God’s kingdom activities.

Those are the people that GOD will make a blessing, by causing the showers of His blessed presence to fall upon them in seasons.

HE WILL MAKE THE SPIRITUAL HILLS AROUND THEIR LIVES A BLESSING.

That tells me if I say I am a Child of God, and I am not a blessing; if showers of God’s presence are not falling on me in seasons, I am not fulfilling my destiny as a City of refuge. I may be living as a City of refuse on the face of the earth. Except we chose to repent, God does not send the rain of His presence constantly on cities of refuse.

When we move from being Cities of refuge to becoming cities of refuse as individuals, we lose the rain of God’s presence that is sent to make our lives a blessing.

Today, I woke up again to find out that each act of sin, no matter how small, have consequence. When we move from a life of right standing with God to a carnal passion controlled life, we stand the risk of becoming cities of refuse to the lost world.

I will share with you what the LORD shared with me on who a city of refuse is as an individual. But first, let’s look at some cities of refuge that lived in the days of the BIBLE.

Let’s begin with Stephen. He stood as a city of refuge and confronted religion and the terrible Pharisees and Judaist stone him to death. That tells us the enemy hate to see us function as God’s apostolic cities of refuge, because that was what he was.

When you are an apostolic city of refuge, you dissolve errors and establish truth. You bring people under the LORDSHIP of Christ, not Just His survivorship. You resist the Kingdom of darkness in Church or the world, calling a spade a spade. You find yourself emitting righteousness, peace and joy in the Holy Ghost. Consequently, turning the lost to the wisdom of the just.

That brings us to another city of refuge called Philip. He went to Samaria, a city under the grip of a false prophet and became a city of refuge for the captives there. They came to him, experienced the kingdom, and saw the difference between sorcery and prophecy, divination and revelation, God’s power and Baal’s powers.

THE BIBLE SAYS THERE WAS GREAT JOY IN THE CITY!

When you become a city of refuge, you bring God’s kingdom down into the lives of men and put great joy in their lives. Yes, you function as God’s fountain of living water in a dry and weary land, because of the showers of His blessings falling on your life as a result.

Now, let’s look at Paul the great apostle of our LORD and savior Jesus Christ. Though he supervised the killing of Stephen when he was a city of refuse, God caught him and he became a City of refuge for the kingdom. One day he entered old Asia and in two years the entire region heard the gospel. The Bible says

“And he went into the synagogue and spoke boldly for three months, reasoning and persuading concerning the things of the kingdom of God.

“ But when some were hardened and did not believe, but spoke evil of the Way before the multitude, he departed from them and withdrew the disciples, reasoning daily in the school of Tyrannus.

“And this continued for two years, so that all who dwelt in Asia heard the word of the Lord Jesus, both Jews and Greeks. Acts 19:8-10 NKJV

“I will make a covenant of peace with them, and cause wild beasts to cease from the land; and they will dwell safely in the wilderness and sleep in the woods.

I will make them and the places all around My hill a blessing; and I will cause showers to come down in their season; there shall be showers of blessing.”

God will make a covenant of peace with those who are living as cities of refuge and cause wild beasts to cease form their lives. That is the first blessing.

THE TERM WILD BEAST IS A METAPHOR FOR DEMONIC SPIRITS, OR DEMONIC ACTIVITIES.

God is saying, no one who is a city of refuge will have a spiritual problem. They will not have a demon oppressing them. He will make all activities of the evil one to cease in their lives.

That brings to fore the most assured way to obtain deliverance, and tells us what our lives become when we live as cities of refuse.

The most assured way to obtain deliverance is not by drinking oil, sowing a seed, going for prayers, but by becoming a city of refuge. The consequences of not being a city of refuge is the presence of demonic activities in our lives. Curses and all kinds evil occurrences will become part and parcel of our life. The enemy will successfully hinder us in all fronts.

Which brings us to the second blessing of being a city of refuge. It says

“I will make them and the places all around My hill a blessing; and I will cause showers to come down in their season; there shall be showers of blessing.”

If we want our lives to be like this, we do not need to do anything other than become God’s city of refuge on the face of the earth.

Any Christian you find going from place to place looking for deliverance, is a city of refuse that is why things are wrong with them. Any church you find where everyone is administered deliverance on daily, weekly, or monthly bases, is full of people who are cities of refuse.

You will always have something to be delivered from if you are a City of refuse.

Operating in the works of the flesh is what a city of refuse does. Calling sin weakness is one of the dangerous philosophies of individual functioning as cities of refuse. The world is in a state of spiritual rot because of the cities of refuses people emulate and take as role models. Sadly, even in Church we find the same problem.

Sin, iniquity or trespass will be coming out of us to those around us when we become cities of refuse as individuals. We will live un-Godly lives in an ungodly world.

For instance, when David slept with Bathsheba, he became city of refuse to her. When she slept with him, she also become a city of refuse to him. The refuse that came out of their actions was sin, iniquity and trespass, leading to death and destruction. God had to move in at the instance of repentance, to do a cleansing work.

The same is happening to many of us today.

God sent this word this morning to urge us to begin to live as His cities of refuge in a perishing world. We should stop emitting ungodliness to the ungodly. They will never come to an intimate knowledge of the LORD that way.

You cannot bring peace to your life or cause a change by being a city of refuse. You must be a city of refuge, and the way to becoming that is the way of the crucified life.

I am crucified with Christ: nevertheless I live; yet not I, but Christ liveth in me: and the life which I now live in the flesh I live by the faith of the Son of God, who loved me, and gave himself for me.

I do not frustrate the grace of God: for if righteousness come by the law, then Christ is dead in vain. Galatians 2:20-21 KJV