“One thing I have desired of the Lord, that will I seek: that I may dwell in the house of the Lord all the days of my life, to behold the beauty of the Lord, and to inquire in His temple.” Psalm 27:4 NKJV 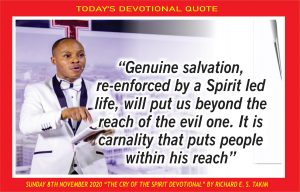 WELCOME TO THE 311TH DAY OF OUR YEAR OF REJOICING

Blessed be the name of the LORD who daily loads us with benefits! We give Him the glory for all He did in our lives these eleven months. I deeply appreciate Him for the things He is teaching us in the ONGOING School of the Prophets, a Prophetic Apostolic Training School (PATS).

I also appreciated Him for what is happening in the American Election. That nation is going through a purging and an alignment that when God is through will shock the world. What you see sitting down with the LORD, no one can see even if they climb the Highest Mountain on earth.

There are so many carnal Christians in the Church today, and they reveal it daily in foolishness. This has become worrisome in the office of the three that bear witness in Heaven and Earth. If you look at it deeply, the consequences are not just speaking in the way we are seeing it today, they are even speaking eternally.

From what the Bible said about the eternal destiny of the carnal, a lot are indeed dying and going to hell, and God wants the dangerous trend to stop. The Bible says to be carnally minded is death; first spiritual, second natural and third eternal.

The growing number of carnal Christians is responsible for the growing number of Christians who are dying and going to hell instead of Heaven. And the perverted gospel of grace is not letting us know that carnality is the greatest hindrance on the paths of many who profess Christ. After getting saved, we are expected to lead a Holy Spirit led life, but the perverted gospel of grace will not let that happen.

It is molding people to think that once they believe in Jesus Christ, and recite what they call “the sinner’s prayer,” they are saved irrespective of how they lead their lives after that. That is very dangerous!

SUCH A CHRISTIAN LIFE IS A CHILD OF A FRUITLESS FAITH OR BELIEF IN CHRIST.

If a fruitless believe in Jesus is what will take people to Heaven, then even the devils are saved.

The bedrock of all the problems we face today as Christians is carnality not demons, because the devil can only get you if you are within his reach. Even Job in the Old testament when the blood of Christ had not been shed could not be accessed until God permits.

Genuine salvation puts us beyond the reach of the veil one. It is Carnality that puts us within his reach. That is why it is important to know what carnality is.

Carnality is allowing the flesh to be in charge of your life after declaring Jesus as LORD. It is being ruled by the natural senses instead of the Spirit of Christ after accepting Christ. That Bible says that leads to death.

In other words, it brings people under the gates of death.

For instance, it has led to the dead of marriages, finances, ministries, and all that make life pleasurable. And like earlier stated, it has led to the eternal death of many. If you are part of the Kingdom of God, then you must wake up from the valleys of living a carnal Christian life and come into the higher life we were called into.

That higher life is not possible without deep intimacy! That is why God is calling us to deep intimacy with Jesus Christ. He wants to eliminate the dangerous trend of carnality, and pseudo Christianity in our midst, and get us ready for the return of our King.

LET ME SHARE SOMETHING AT THIS POINT. YOU SEE, WHEN JESUS CAME, HE DID MIRACLES, SIGNS, AND WONDERS.

Miracles are released to solve problems, but signs and wonders are sent to make a prophetic statement. For instance, when Peter had the miraculous catch of fish it was a statement Jesus made; first to Peter, then to us!

To Peter that move of God was sent to tell him to quit his fishing business and come into the Kingdom business – spiritual assignment of catching or snatching men from the grips of hell, and bringing them into Christ. That was explained in the verse.

You will agree with me that we need more of God today!

Outright spiritual darkness is what you see in the life of those who profess to be sons of light. Sin in all sorts of deceitful living and sexual perversion, now reigns from the pulpit to the pew.

There seem to be no power to live the Holy Life we are all called into.

Physiologically, you see Christians move from illness to illness because there is no balm in Gilead again any longer. The word “Gilead” means worship, and the word “Balm” means Healing. Our worship no longer generates Healing for the sick. It only generates “goose bumps” and noise.

Consequently, many get sick and die prematurely and we foolishly explain our powerlessness away with the old funeral sermon that says “the LORD gives and the LORD takes back, blessed be the name of the LORD” making God look wicked in the eyes of those stricken with the grief of the loss of their loved one.

LIKE I SAID ONE OF THOSE DAYS, ENOUGH OF THE NONSENSE WE CALL CHRISTIANITY.

The time to get deep with God is now. If we do not obey the call for deep intimacy, we will always be answering to the calls of our enemies. The spirits of hell, death, and grave will not cease being our companion.

A generation that will possess the gates of their enemies must not be carrying bottles of oil about. It must be deep in their walk with God.

As you embrace this season of life, do yourself a favor as a Child of God and walk away from any people, church, pastor, or fellowship where you are not being stirred towards deep intimacy with Jesus. Go away from shallow places because the days are dangerous.

You can no longer afford to plant your destiny in Churches where Charismatic witchcraft rules and reign among the people. Our devotional text today said

“One thing I have desired of the Lord, that will I seek: that I may dwell in the house of the Lord all the days of my life, to behold the beauty of the Lord, and to inquire in His temple”

God wants us to start desiring this one thing – deep intimacy with Jesus Christ – a realm where we do nothing but behold the beauty of the LORD and enquire in His temple! That is the DEEP to launch out into. If you do, whatever you were running away from, will start running away from you.

LET THIS SCRIPTURAL PASSAGE BE AN ADDITIONAL MEDITATION FOR THE DAY;

Then He got into one of the boats, which was Simon’s, and asked him to put out a little from the land. And He sat down and taught the multitudes from the boat.

When He had stopped speaking, He said to Simon,

“Launch out into the deep and let down your nets for a catch.”

But Simon answered and said to Him, “Master, we have toiled all night and caught nothing; nevertheless at Your word I will let down the net.”

And when they had done this, they caught a great number of fish, and their net was breaking. So they signaled to their partners in the other boat to come and help them. And they came and filled both the boats, so that they began to sink.

When Simon Peter saw it, he fell down at Jesus’ knees, saying, “Depart from me, for I am a sinful man, O Lord!” For he and all who were with him were astonished at the catch of fish which they had taken; and so also were James and John, the sons of Zebedee, who were partners with Simon.

And Jesus said to Simon, “Do not be afraid. From now on you will catch men.” So when they had brought their boats to land, they forsook all and followed Him. Luke 5:3-11 NKJV