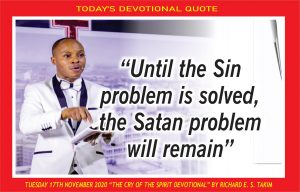 WELCOME TO THE 320TH DAY OF OUR YEAR OF REJOICING

New years to kingdom citizens, calls for new levels of faith. Thank God for the opportunity to achieve that in our year of higher heights.

Moving, from where an OUTGOING YEAR left you to a much higher place in the Spirit in a coming year should be the vision of every child of GOD, who truly seeks Him.

Even contents like what we find in this devotional are designed to do the same! In our devotional text today, you find Apostle Paul’s strong words that has helped in shaping the destiny of many from generation to generation.

If you read Church History, you will find out that most revivalist God ever used to rekindle the flames of His Holy Spirit on others in their generation feed from that scripture to stay on fire for the LORD all through, till their death.

A MAJOR HIGHLIGHT IN THE TEXT SAYS;

If we do not forget the things that happened yesterday – the good, the bad and the ugly – and press into what God has predetermined that it happens today, we will never fulfill God’s plans and purposes for our lives. A generation that holds on to past glorious or inglorious things that happened to it will never be able to finish its course in God’s eternal plan for mankind!

The church ought to be a moving army. Everyone who bears the name of the LORD ought to be moving and progressing in God’s plans and purposes for his life. If we get to a particular peak and do not lift up our eyes to look for higher grounds to press into, we will begin to sink and stink. I hope you understand me.

That is one major reason why the LORD declared Higher Heights on us, in spite of the glorious heights we achieved this year as a spiritual family. We have indeed achieved so many success peaks in our pursuit of God’s assignment for our lives this year.

Samson made a major mistake at a particular success peak of his life. He did not just make a mistake, he desecrated his consecration turning himself into a captive in the hands of people who once dreaded him. Yes, we can blame that on Delilah but if we look deeply we can see another reason for his fall.

In Zion, you do not relax at a success peak. You look into the Spirit realm to design what next God has for you and then follow. Delilah came into the picture when Samson got stuck to a season of success. He needed to be on the move but he failed, like many of us do today.

NO MOVING ARMY CAN BE CAPTURE BY THE ENEMY.

If Samson had operated as one, he would have not been captured. But thank God he finished strong. In God’s kingdom, we don’t get ourselves stuck to a season of success (or even failure), we move on! That is the secret of unending strength from the LORD.

If you do not press daily bases – if you do not press into what God want to do next with your life after doing one thing with it – you will be stuck to a season of progress (or peril), and begin to experience your carnal cravings coming alive, and once that happens, you will always find someone or something to help satisfy it for you.

That is the reason generals in God’s army fall!

Take David for instance, he saw Beersheba, the naked woman who trapped him into sin. That happened when Kings go to war.

Meaning, if he were in the war front, that part of his life would not have existed. Many of us have parts of our lives that we wish never happened. Sadly, I have a lot! The Bible says,

Everything you just read, and what happened as a result, is traceable to one season the King did not go to war; one-time great King David got stuck to a season of success. If he was in the battle field responding to the next thing God wanted to do with his life, he wouldn’t have seen a woman who was busy taking her bath from his pent house.

WE ALLOW OUR CARNAL DESIRES TO TAKE THE BETTER PART OF US IF WE ARE NOT BUSY ON THE BATTLE FIELDS OF GOD’S PLANS FOR OUR LIVES!

We allow our carnal desires to take the better part of us if we do not spend our days submitting to the next thing God want to do with our lives, after doing one successful thing with it. Your divine destiny will need a constant pressing into things yet to be done with your life to be fulfilled.

The Church is stuck and stinky in the Spirit today because we do not know or apply this in our walk with God.

We rather move from one marriage program to another, one poverty killing meeting to another, but do not move from ONE realm of glory to another. Sometimes I ask myself “when will the poverty be finally killed.” All these kinds of meetings are just to keep the greedy pastor smiling to the bank!

The truth is, any man or woman preacher who takes you from one poverty killing meeting to the other, is only interested in killing his own poverty. Not yours! I have said that over and over.

Hear this; anyone who builds his or her ministry solely on solving spiritual, marital, or financial problems of people alone is a big fraud. Such things have nothing to do with the great commission.

We are called to solve the sin problem in the lives of men. The sin problem was the work of the devil that Jesus was made manifest to destroy. And it can only be solved when Christ is formed in men.

The great commission is to form Christ in people. Then Christ in them becomes the hope of their financial, spiritual, or marital glory. I hope you understand me.

If you read Church History, you will discover that whenever the Church lose touch with the glory, preachers will settle on using man made methods and doctrines of devils, most times with the anointing oil, to solve earthly problems, leaving the people with great eternal problems.

UNTIL THE SIN PROBLEM IS SOLVED, THE SATAN PROBLEM REMAINS

It will require that you press along with members of your spiritual family through corporate fellowships, where the word is dissected and the power of God imparted.

Friend, when it comes to fulfilling God’s plans for your life, if there is no pressing, there will be no progress. You must press from one level of success to another or from inactivity to productivity, until you become all that god called you to be.

That is why no lazy man or woman has been able to fulfill divine destiny.

I pray for you today that as the curtains of our Year of REJOICING are closing for our year of Higher Heights to open up for us, the Zeal of the LORD will drive you into alignment with this word. Amen and amen.