“Unless the Lord builds the house, they labor in vain who build it; unless the Lord guards the city, the watchman stays awake in vain.”

“It is vain for you to rise up early, to sit up late, to eat the bread of sorrows; for so He gives His beloved sleep.” Psalms 127:1-2 NKJV 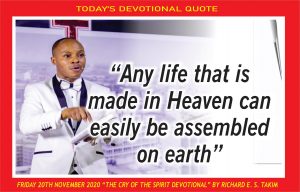 WELCOME TO THE 323rd DAY OF OUR YEAR OF REJOICING

The mercies of the LORD have been our reason for living. If we were not serving this God who does not deal with us according to our sins but according His tender mercies, many of us would have been destroyed by the consequences of our sins. If the LORD should mark iniquities, indeed none shall stand. But there is forgiveness with Him so that He may be feared.

This year have been a year of great seasons of receiving a dimension of God’s word known as strong meat from the Spirit of the LORD. The intensity of the word and flow of the Spirit in all the sessions that we have heard this year tells us one major thing. God is up to something!

The image of jealousy in the House of a jealous God has gone down in the lives of many. The walls of deceit and sorcery have been pulled down from the hearts of some. The python spirit that chained so many has also been arrested by the owner of the Church.

When He was physically on earth, He declared,

“And I also say to you that you are Peter, and on this rock I will build My church, and the gates of Hades shall not prevail against it (Matthew 16:18 NKJV)”

It was not a ceremonial speech, but a declaration of war!

A declaration so many of us quote but know nothing about! A word in season that some of us preachers quote but know very little about. If we truly know it in depth, many would not have turned our local Churches into money spinning machines, metaphysical cults, social clubs or political parties!

We would not have become the very gates of hell Jesus spoke about, as we portray it by our actions.

Fiend, it is very possible for a preacher to become a gate of hell. When a preacher becomes a gate of hell on the face of the earth he will begin to ask for money for prayers and use all sorts of things to minister to people. The spirit of hell will be transferred into people while he preaches.

SO MANY HAVE BECOME GATES OF HELL THAT IS WHY THE ETERNAL PURPOSE OF GOD IS NOT PROSPERING BY THEIR HANDS!

But there is another generation of God’s reserves who have not bowed their knees to Baal. They are the ones Jesus said He will give the keys of the Kingdom to, so that they will be able to sense what He has bound in Heaven and bound it on earth. And sense what He has loosed in Heaven, especially concerning His Church, and loose it on earth. He found some of this breed the first time He came and said to them;

When you hold the keys of the kingdom of heaven on earth, every other kingdom will have no choice but to listen to you!

So many in the body of Christ today are key-less in the spirit that is why they do no exercise dominion over evil works. But we leave that for another day. Meanwhile do not fail to join us in our ongoing Prophetic Apostolic Training School as we look again on the Unknown enemy. It continues this morning, 10 am, then 3 pm and 7 pm. From today Friday to Sunday

God is passing through His prophetic reserves in our generation to renew and release them into the battle field. They are called the remnant. The remnant are people who still have their holiness garments as white as snow.

He is passing among them to raise Himself an army of apostolic warriors who will execute His end time redemptive plans in herald of His return! Join what Heaven is doing in the now at the Cry of the Spirit ministry if you do not have a Church in this move!

THAT BRINGS US TO THE WORD OF THE LORD FOR TODAY!

What God is doing in the now, is usually revealed and activated by what He is saying in the now. The sayings of the LORD and His doing are not separate-able. They work together. What is the LORD saying to us this morning?

Well, our Devotional text has the answer. It says,

“Unless the Lord builds the house, they labor in vain who build it; unless the Lord guards the city, the watchman stays awake in vain. It is vain for you to rise up early, to sit up late, to eat the bread of sorrows; for so He gives His beloved sleep.”

There is so much we can chew here. The first thing you must understand is that if the LORD is not the one building your life, nothing about your life will be pleasant. Your Life will become full of toiling and pain if you become its maker and builder.

There are a lot of people who wakes up very early in the morning and returns back late in the night just to make ends meet. That is not the plan of God for their lives. God never designed life to be led that way.

“it is vain for you to rise up early, to sit up late, to eat the bread of sorrows; for so He gives His beloved sleep.”

Any money you earn through toiling and suffering is called the bread of sorrow in the spirit.

Come to think of it, why do people toil and suffer in life? Why are people going through so much in life? Is it because of the curses in their father’s houses, voices crying against them from their villages or what? Is it because they do not tithe or sacrificially give?

Most do! I was one, and I know what I am sharing with you this morning.

TRYING TO ASSEMBLE WHAT GOD HAS NOT MADE IN HEAVEN IS THE REASON FOR TOILING AND SUFFERING AMONG US.

That was why Jesus did not do anything that He did not see the Father finish in the Spirit’s realm. He knew it will be total failure to lead a life that Heaven has not revealed to Him to lead on earth.

He said in His word,

“Most assuredly, I say to you, the Son can do nothing of Himself, but what He sees the Father do; for whatever He does, the Son also does in like manner. For the Father loves the Son, and shows Him all things that He Himself does; and He will show Him greater works than these, that you may marvel” (John 5:19-22 NKJV).

I have just given you the keys to sweat less living given to me by the lord many years ago!

What is God saying to you this morning?

Are you suffering? Before you call on people to pray for you, check who is the source of the life you are living on earth? Where are you assembling your life decisions from? Are you a piece of what have been finished in Heaven or you are living like a god to yourself? Taking decisions, initiating things, and doing things that you have not seen the Father do?

If the answer to all these is yes, then today is the day to retrace your steps. It is time to become so synchronized in the Spirit like Jesus was; it is time to limit yourself to assembling things on earth only when you are sure they have been finished in heaven concerning you! Be it marriage, career, and etc.

Friend, it is time to start spending your days based on the revealed paths and programs of God for your life. It’s time to begin to move in the scroll of the books and doing only things that are written of you.

LET THIS SCRIPTURE NE AN ADDITIONAL MEDITATION FOR YOU TODAY!

Then I said, “Behold, I come; In the scroll of the book it is written of me.