“O Lord, how manifold are Your works! In wisdom you have made them all. The earth is full of your possessions —

These all wait for you, that you may give them their food in due season. What you give them they gather in; you open your hand, they are filled with good.” Psalms 104:24, 27, 28 NKJV 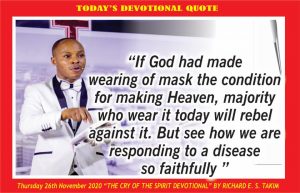 WELCOME TO THE 329TH DAY OF OUR YEAR OF REJOICING

Welcome to another great day from the LORD. Indeed, the Heavens declare the glory of GOD; and the firmament shows His handiwork. Day unto day utters speech, and night unto night revealed knowledge. This is very true in the lives of all who sits at the spiritual fountain of this apostolic and prophetic ministry.

For many of us, it is out of His mercies that we are not consumed. He has kept us, fed us both spiritually and naturally, built our faith, taken away out doubts, strengthen us, spoke to us kindly when we did not deserve, loved us, and protected His glorious name in our lives.

In simply terms, He has been our GOD. And He will continue to be our God, for ever and ever. Amen and amen.

By the time this year ends, many of us will fully realize how much God’s goodness and mercies has kept us. With the deaths and diseases around us, taking out even the best of the best of humanity, it is indeed out of His mercies we are alive. It is not because we are righteous; no! no and no.

Many of us have done so many wicked things, but His mercies have kept us!

This morning, we will be looking at some mysteries of divine seasons. This year has is a foundational year. A year that was filled with seasons of diseases, death, economic hardship and etc. for many nations, families and individual.

I BELIEVE EVEN GOD HAS NOT RECEIVED IT.

If God were the one who gave this rules as condition for making Heaven, very few would have obeyed them. They would have called who obeys them religious bigots or derailed fanatics. If we do not look at this season that is upon us and draw revelation leaning on it, it will come and go leaving many without the prosperity in the adversity it brought along.

I remember saying in March that this season came with its own prosperity, because every adversity has prosperity in it. Then we ran a series on the Bible class titled “The Prosperity in Adversity.” The revelation of times and seasons is key to unlocking the prosperity in the adversity a season brings.

There are also times and season cooked by the enemy of our souls in hell to launch attacks on the human race. Jesus calls them “the hour and power of Satan.”

I find this kind of times and season very terrible in the armoury of Satan. Most times he specially prepared them against the warriors of God, basically to network with their flesh or season of weariness and take them down to the place of shame and reproach.

Our Church generation is yet to come to the full revelation of divine times and seasons. That is why many struggle and allow their lives to go on in a circle, without significant progress. We do not understand that God does things under Heaven in set times and seasons and align with Him.

EVEN THE MOST DIFFICULT THINGS CAN EASILY BE DONE; IF DONE WITHIN THE TIMES AND SEASONS THE LORD HAS SET THAT THEY BE DONE.

It is spiritually deadly to be prophetically blind to God’s set times and season for your lives on earth. It has been one of the reasons for the backwardness of many in so many local Churches. If you do not know the times and seasons GOD has set for you to do this or that, you will be doing things outside their set times and coming to ruin.

For instance, the marital lives of many are in ruins for stepping into that phase of life outside GOD’s set time and season for it, so long as their lives are concerned. Many compared themselves with others and run into marriage in competition, as if there is a crown on the other side waiting for them. Today they are groaning for it.

Actually if you get married outside the season for it, you will end up with a crown of sorrows. The difference between the glorious you and the gory you lie in your ability to recognize and seize a supernaturally determined season of God for your life.

Significant progress in life is always a child of divine seasons. If we do not come to terms with this truth, we will keep struggling, fighting, competing with ourselves, and taking decisions that will result in more and more struggles.

Those who understand God’s will for their lives and His determined success season for them do not compete with anyone. They live according to divine will, follow divine ways and compare themselves with no one but the will of God for their lives. If your life does not fit this description, then you will have hell to contend with.

Most of our worries and troubles in life are consequences of not understanding these simple but profound truths. Times and Season are what determine success in life. God created them and gave them the power to determine certain triumphs on life. It is important to note this truth and walk with it.

I have come to realize that when the time comes for a wicked man to die, nothing can stop TIME from taking his life. When the season comes for faithfulness to be rewarded by Heaven, no force in heaven or on earth, or beyond the earth can stop SEASON from making it happen.

GOD SCHEDULED OUR LIVES TO BE LIVED IN TIMES AND SEASONS

“These all wait for you, that you may give them their food in due season. What you give them they gather in; you open your hand, they are filled with good.”

Whenever a faithful man or woman enters his or her season of reward in the Spirit, things will start lining up in the natural for him or her. They will begin to gather whatever God has given them that they could not access before.

They will see their season forcing the gates to open for them, and giving them things their eyes have not seen, their ears heard or hearts conceived. They will find the season pulling men and substance to them from unexpected ends. Even their inadequacies will be covered with God’s glory; it will be celebrated by many and tolerated by others.

Being in your time and season has a way of making you a person of exploits. David comes to mind here. It was the season for Goliaths demise that gave him victory over the giant. He sensed that it was time for the giant to go down that was why he went after him. People who operate that way will tread upon serpents and scorpions, and nothing shall by any means hurt them.

When you attack your enemies in their divinely determined season of defeat, they will fall before you like dead men, even before you talk to God about them.

Most problems in our lives are not waiting for a onetime prayer and fasting to be dealt with. They are waiting for a time and season of fasting, prayer and complete obedience to the will and ways of GOD for them to be vanquished. When we do righteous things for a long time, they have a way of bringing us into a season God has set for our glorious manifestation.

That is why the covenant is key to turning our lives around.

It helps you create a time and Season for your glory. It gives us the opportunity to operate with God at a Higher Level, where He uses our persistent and consistent obedience to bring us into our season.

May God bring you to your season!

“of the sons of Issachar who had understanding of the times, to know what Israel ought to do, their chiefs were two hundred; and all their brethren were at their command;” (1 Chronicles 12:32 NKJV).

If you want things to be at your command, understand the divinely determined times and season for doing them before you move to do them. God’s kingdom citizens fail for not knowing this secret.

It is people who do not understand this concept that go head long against the enemy and returns with injuries to show and sometimes to foolishly boast about.

Understanding your divinely determined times and season is key to dealing with the enemy and unlocking lasting miracles, and covenant blessings.

The combine forces of sin, Satan and the evil and corrupt system of this world hate people who lead their lives according to God’s determined seasons for them. That is why the human system will never support you if you choose to lead your Christian life that way!

May this revelation remain a guiding light in our lives as we all navigate through the trouble waters of this world, in Jesus previous name. AMEN

MAKE THIS SCRIPTURE AN ADDITIONAL MEDITATION;