“I will stand upon my watch and set myself on the rampart, and watch to see what He will say to me, and what I will answer when I am corrected.

Then the LORD answered me and said; “write the vision and make it plain on tablets, that he may run who reads it.

For the vision is yet for an appointed time; but at the end it will speak, and it will not lie. Though it tarries, wait for it; because it will surely come, it will not tarry.” Habakkuk 2:1-3 NKJV 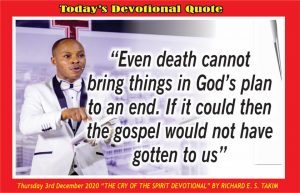 WELCOME TO THE 336th DAY OF OUR YEAR OF REJOICING

This is the day the LORD has made, we will still rejoice and be glad in it. His grace is sufficient and His presence available.

A bit strengthened today to write something for us to feed on. I don’t consider what I wrote yesterday a devotional. I just wrote a prophetic lamentation for my spiritual daughter and fellow soldier who our Heavenly Father welcomed home few days back.

There are people I am quietly working on and trusting the LORD to thrust them into the harvest field by my hands. She was one of them. I feel like an arrow was plucked out of my hand. But it is well. I believe the greatest legacy we can have for her is to go one with the mandate she was to execute. The LORD shared a lot of things with her, and we will continue with those prophecies.

I want to share something about the longevity of divine mandates, prophecies and purposes in GOD’s kingdom.

When God speaks, or purposes a thing, He does that with eternity in view. But most times when we hear, we hear it with TIME in view. When we hear that way, we begin to build expectations that actually runs contrary to GOD’s without we knowing about it. That is when what we expect to happen in time do not come to pass, making the immature feel the thing has failed, or may be he or she did not hear GOD well.

You see, when GOD called Moses and spoke to him about leading Israel from the land of Egypt to Canaan, everyone would think Moses will see the promise land. No one would ever conceive at heart that he would not even step a foot on it.

Did God knew from the onset that he would not step foot there? Yes He knew! But He still spoke as if he would anyway! The Bible says,

“And the LORD said; “I am the God of your father – the God of Abraham, the God of Isaac, and the God of Jacob.” And Moses hid his face, for he was afraid to look upon God.

And the LORD said; “I have surely seen the oppression of My people who are in Egypt, and have heard their cry because of their taskmasters, for I know their sorrows. …come now, therefore, and I will send you to Pharaoh that you may bring My people, the children of Israel, out of Egypt.” Exodus 3:6-7, 10 NKJV

The verses in between (Verses 8-9) tells us that Moses understood where he was taking them to. As earlier stated, the mandate covered from Egypt to the promised land when Moses received it, but he never finished it, even when he thought he would.

In the same way, Elijah thought he will be the one to vanquish Baal until he begin to feel frustrated and wished to die. He would later leave the scene for Elisha to continue from where he stopped. If GOD give you a mandate, do not always think you are the one to take it from start to finish. Your job may just be to receive and then pass it on.

GOD IS ETERNAL IN HIS VIEW OF THINGS AND GENERATIONAL IN HIS THINKING.

He would give a word to one, and that person will think he or she will be the one to fulfill it, and then move with that prophetic frenzy, only to realize that things will no longer work out as foreseen. That is not the time to doubt but the time to ask the LORD, “what next LORD?” Perhaps someone else is waiting close by to carry the word to the finish line.

I remember reading a story where the LORD spoke to the mother of Maria Woolworth Etta of going into ministry. I think the same was said of the mother of Amie McPherson. None of them could fulfill the call of God upon their lives, but they received the word and began to almost run with it.

Then one of them went into marriage but death struck and in her dying bed, she lifted up the child she just gave birth to and told the LORD “all that you want to do with my life, I pass it to my child.” That little girl who had not encounter with the LORD herself, would later grow under the portal of her mum’s mandate and begin to have encounters with the LORD. She lived and died as one of the greatest warriors of faith.

Death could come to truncate the lives of those God has given a mandate to, but the mandate does not die if it is from the LORD. It will continue in the lives of their spiritual or natural Children, their disciples, or their protégés.

That is why we must keep holding unto the LORD and His word in all circumstances. We must not doubt anything even if there is nothing to believe again.

Every mature Child of God must know that men may die, but mandates continue. People may die, but prophecies continue. God is eternal in His views and generational in His thinking. That is part of the faith and patience of the saints.

I feel strongly in Spirit that there is someone reading this with a mandate of word of prophecy that he or she thinks, “it is over” about. The LORD sent me to tell you that it is not. You did not make a mistake. Do not allow the turn out of events to create doubts in your heart. Even death can not bring things in God’s plan to an end. So, brace up your loins and move on with the word of the LORD.

There could only be a fresh pattern for it’s execution but it will be executed. Our job is to bend our ears to the LORD to hear Him the second time. Things will become clearer and better for us.

The Bible says every world of God is tried. We just do not FULLY know how it is tried. Sometimes, it is tried through change of circumstances, making it look as if we did not hear the LORD properly.

WHEN THE WORD OR MANDATE OF THE LORD IS BEING TRIED, THAT IS WHEN THE STAND STRONG IN IT.

Joseph stood strong and saw the fulfillment. Moses stood strong, and saw Joshua appointed to finish what he started. Elijah, stood for 20 extra years, not prophesying but raising Elisha. We may need to stand strong some way or the other. It all depends on the mandate and it’s scope.

“I will stand upon my watch and set myself on the rampart, and watch to see what He will say to me, and what I will answer when I am corrected.
Then the LORD answered me and said; “write the vision and make it plain on tablets, that he may run who reads it.

For the vision is yet for an appointed time; but at the end it will speak, and it will not lie. Though it tarries, wait for it; because it will surely come, it will not tarry.” Habakkuk 2:1-3 NKJV

The encounter this prophet of GOD had with the LORD and what He said to him has a lot to teach us. The lessons buried in it have been drawn and applied in the lives of God’s warriors for many generations. One thing I see here is the possible scope of every mandate, prophecy or purpose from Heaven.

There is the aspect of standing upon your watch and setting yourself upon the prayer rampart, to see what He will show or say to you. There is the part of receiving and making it plain upon table; without running with it. There is also a part to run with it. You may not be having the length of time to do all that.

There are times that your job could just be to stand upon a prayer watch an set yourself upon a prophetic rampart just to watch and see what He will be saying to you. Yes, this is the aspect where you spend your years on earth laying a spiritual foundation for either your child or someone else, to come stand on and receive a Heavenly visions for execution.

There are also times where your role could just be to receive the vision and spend your days making it plain upon tables for another person in your spiritual or natural bloodline to come pick it up and run with it. Not understanding this prophetic dichotomy could cause a lot of headache in our lives.

I have seen women with Children, those people call single mothers, who think for having Children out of wedlock the calling of God that came upon them when they were pure and innocent was false. Please it was not. Maybe your job was just to receive it. Now, pray your child or children into fulfilling it!

It is important that visionary people understand what role God want them to play in a given vision or mandate, and not get confused when circumstances changes. Know that the word that the LORD has given you will be tested, tried and proven. Your faith will be required in the process. So keep it intact no matter what may be happening in or around you.

If your job is to stand upon the rampart and set your set on the prayer knee all your life, or to see what He might be saying to you for onward delivery to someone else, please do it. If yours is to receive and make it plan upon table, instead of running with it, please stay at your post. If yours is to run with it, that is also great.

The end time army will be full of soldiers of the cross who will be in order; keeping their ranks and knowing exactly what the LORD want to do with the life He has given them. GOD has scheduled your days. Please know what He wants to use your life to do and stick to it. We do not have eternity to live in this life. We have TIME to live. Let us make good use of it.

One major way to do that is to identify what to die for, not live for.

LET THESE WORDS OF PAUL SPEAK FURTHER TO YOU THIS MORNING!

“Now when we heard these things, both we and those from that place pleaded with him not to go to Jerusalem,

Then Paul answered, “what do you mean by weeping and breaking my heart? For I am ready not only to be bound, but also to die at Jerusalem for the name of the LORD Jesus.” Acts 21:12-13 NKJV