Home REVIVAL THE CRY OF THE SPIRIT DEVOTIONALS – BY RICHARD E. S. TAKIM

“of the sons of Issachar who had understanding of the times, to know what Israel ought to do, their chiefs were two hundred; and all their brethren were at their command;

of Zebulun there were fifty thousand who went out to battle, expert in war with all weapons of war, stouthearted men who could keep ranks;” 1 Chronicles 12:32-33 NKJV 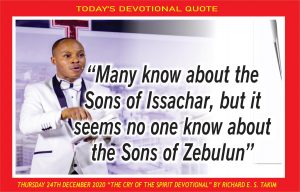 WELCOME TO THE 358TH DAY OF OUR YEAR OF REJOICING

We give God the glory for bring us to the last days of this year, especially to another Christmas eve.

Though there could be no Christmas carols like many usually do due to the pandemic, we should not forget the purpose of the birth of Christ. Jesus came to seek and to save His people from their sins; He was born so that He could be born in our spirits by His Holy Spirit. That is what born again really is; having Christ born or formed in us!

If Christ is not form in us, it does not matter the kind of religious life we may be living, it does not matter how prayerful or spiritual we may be, we are still not saved! It is Christ in us that is the authentication of our salvation. That is why Paul said “Christ in you the hope of glory.”

There are different things that God has established in His kingdom to bring us to the place of having Christ formed in us. One of it is the assembling of ourselves in corporate worship. That is why meeting and having Church service is forbidden in China and many other places of the world. It has a way of snatching souls from hell.

Where he cannot stop them, he will raise false religion or false Churches to trap people in them so that they cannot join Christ centered Churches in corporate fellowship. I know a women who was told by some ladies to join them in their Church of four people instead of coming to the Cry of the Spirit.

At first, she believed them because they appeared helpful, and joined them. Then prophecies about the facts of her life began to come out of them, which extracted more loyalty from her to them. She became committed.

But one day while prophesying, they said to her that God said she should sleep with a certain married man who was interested in her, because He has sent him to take care of her needs. That was when she ran!

But what if she never knew that it was a sin? She would have been committing that sin and taking it to be divine help. That is how Satan establish false corporate fellowships to stop souls from finding Christ centered Churches to use in saving their souls from his hands.

Our generation seems not to know the power of righteous corporate fellowships but the early Church was different. They knew the power and made use of it so well in getting people saved, without even reciting the sinner’s prayer. I mean, genuinely saved!

They met for corporate worship daily and grew into making the first day of every week, the ultimate day set aside for corporate fellowship. That is where Sunday services sprang from.

THE LOST DESIRE TO JOIN OTHERS IN FELLOWSHIP IS A SIGN

I have come to discover that so many people have fallen from the faith without knowing. They have not denied it but have fallen from it. You see it in how they treat the need to join other believers (not false believers) for Spirit enabled and empowered corporate fellowship.

One major sign that you are no longer on paths that leads to heaven is a lost desire to join other brethren in fellowship.

Yes, there are assemblies of Satan call Church and it’s better to sit at home than to worship in any of them. But it’s out of order to sit at home perpetually claiming there is no Church to worship. That alone shows you have lost the Holy Spirit and if you die Heaven will not be your home.

The Bible made it clear that without the Holy Spirit no one is Heaven worthy because He is the seal of our Salvation. It says emphatically

That makes it clear that if the Holy Spirit is not in your life, you are not Heaven worthy – you are not one of Christ’s. If you die, Heaven will not be your home.

I want to reiterate that according to the times and seasons we find ourselves, we are in the days of the great falling away. The Holy Spirit has departed from the hearts of many believers, leaving them to lead a Christian’s life without the Him.

THEY NOW HAVE A SPIRIT THAT LOOKS LIKE HIM IN THEM.

That is why there is a lot of Christianity without the Character of Christ in Church today. Like I said yesterday in the apostolic chat, we are to work with the Holy Spirit to have the character of Christ formed in us; we are to take actions, as He enables us to develop moral excellence in our Christina faith.

We need the Holy Spirit in our lives more than we need food in our bodies. That is why those who know this spend their days in fasting and prayers to have or retain Him in their lives. The give themselves seasonally to the ministry of the word and prayer to keep His presence active in their lives.

Friend, there is something serious happening on earth today.

Satan is moving through churches, using a counterfeit Holy Ghost, to build himself an army that is silently taking and keeping believers ignorantly on paths that lead to eternal death, using statements like “you are the righteousness of God in Christ Jesus” but if you look at their lives, you cannot see that righteousness of Christ in them. You only see all forms of uncleanliness in them.

Sadly, this silent move of Satan is headed by some Christians who do not know how to keep their ranks like the Sons of Zebulun kept in their days.

They talk Christianity and sometimes promise people liberty but they themselves are servants of corruption. They claim born again but are not keeping the Holy commandment of righteous living. Their hearts are wicked and bitter but spiritual. Apostle Peter described this men and women who are leading this silent activity of darkness in these words;

“While they promise them liberty, they themselves are slaves of corruption; for by whom a person is overcome, by him also he is brought into bondage.

For if, after they have escaped the pollution of the world through the knowledge of the Lord and Savior Jesus Christ, they are again entangled in them and overcome, the latter end is worse for them than the beginning.

For it would have been better for them not to have known the way of righteousness, than having known it, to turn from the holy commandment delivered to them.” 2 Peter 2:19-22 NKJV

BUT GOD IS ALSO DOING SOMETHING. HALLELUJAH!

He is moving through the nations of the earth by His Holy Spirit. He is building Himself an army that will stop the works of this army and destroy the last enemy.

“The last enemy that will be destroyed is death” (1 Corinthians 15:26 NKJV)

There are different kinds of death. There is Death as moral corruption, Death as spiritual separation from God, and death as eternal separating from God. There is also natural death. All this are what the LORD will finally destroy using the Army He is raising.

Our devotional text this morning is beautiful.

It is full of truths we cannot unpack in a devotional. It presented a prophetic template of two generations or kinds of Spiritual Sons that will be part of God’s end time army! The first is the Sons of Issachar the second is the Sons of Zebulun. These two sets of Sons have a distinguished character that can only be found in the lives of those with the Holy Ghost in them – the true Spirit of God!

The first is a perfect understanding of the times and season and the second is the ability to keep rank in the spirit. The Bible says,

“of the sons of Issachar who had understanding of the times, to know what Israel ought to do, their chiefs were two hundred; and all their brethren were at their command;

of Zebulun there were fifty thousand who went out to battle, expert in war with all weapons of war, stouthearted men who could keep ranks;”

I WANT TO DWELL ON THE SONS OF ZEBULUN THIS MORNING.

The Sons of Zebulun where men who were experts in war with all weapons of war, stouthearted men. They were men of great skill and strength. But they did not allow any of that to inflate them with pride. They maintained a humble spirit that enabled them to keep their ranks. This is one kingdom ingredient you cannot find in the lives of those with the pseudo Holy Spirit.

Anyone with a pseudo or mixed Holy Ghost sees himself or herself higher than authority. They move in a pride that is wrapped in a blanket of humility that the bible calls false humility. The overestimate themselves and see themselves either equal to set authority or even greater than it.

If you speak humbly but carry a tower of pride your inside, you will not be able to keep your rank in God. You will self-destruct, it’s just a matter of time. In the book of Numbers Chapter 16, Dothan Korah and Abiram and their families died because they could not keep their ranks. They saw themselves equal to Moses, acted so and got themselves killed by the furry of GOD.

You do not see yourself equal to an authority that God has set, even if you consider yourself more anointed than it.

Many of us want to be great and successful in Christ but how many of us will carry the capacity of the Sons of Zebulun and still be humble under the mighty hand of GOD? How many of us will still keep our ranks in our local Churches with such spiritual prowess?

The greatest challenge we have today is men and women who cannot keep their ranks. They love occupying positions in Church but lack the character to occupy them.

So much can be said on the Sons of Zebulun but this is just a devotional.

I believe God’s message for the day have been passed. As we get ready to commemorate the birth of our LORD Jesus Christ, let’s carry out a Check of ourselves. Let’s check of we have the true Holy Spirit in our Lives.

If you have the true Holy Spirit, He will use your efforts to form the Character of Christ in you, or (in Bible terms) confess that Jesus Christ came in the flesh by manifesting His virtues in your Character using your effort to develop them.

If you have the true Holy Spirit in you, He will empower and propel you to add godly virtues to your faith. Yes, He will activate you to take deliberate actions in developing moral excellence as a Christian.

The Bible calls the pseudo Holy Ghost “the spirit of the Anti-Christ.” It is the very spirit ruling most Churches and Christians today. It’s my prayer that you not be part of this dangerous army of Satan on the earth in Jesus precious name. Amen.

“Beloved, do not believe every spirit, but test the spirits, whether they are of God; because many false prophets have gone out into the world.