“But evil men and impostors will grow worse and worse, deceiving and being deceived.”

“But you must continue in the things which you have learned and been assured of, knowing from whom you have learned them, and that from childhood you have known the Holy Scriptures, which are able to make you wise for salvation through faith which is in Christ Jesus.”

“All Scripture is given by inspiration of God, and is profitable for doctrine, for reproof, for correction, for instruction in righteousness, that the man of God may be complete, thoroughly equipped for every good work.” 2 Timothy 3:13-17 NKJV 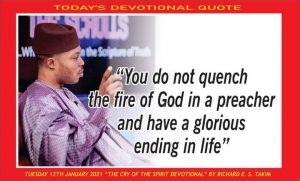 WELCOME TO THE 12TH DAY OF OUR YEAR OF HIGHER HEIGHTS

There are several distinguished scriptures in the Bible that should keep the entire human race on paths of righteousness. The scriptures that talks about reaping what we sow, and having things happen in our life according to our deeds.

Many do not know that Heaven and earth was designed to relate to us according to our deeds. It is our deeds that control what we get from heaven and earth.

If you come into the fullness of the knowledge of the result of the things you do on daily bases, you will realize that most of your future is not in God’s hands but in the hands of what you did yesterday, or what you are doing now, which time is poised to return into your life tomorrow.

Whenever the LORD GOD sees what mankind was doing, and where we are Headed because of the things we are doing, He will send His voices in form of prophetic warning fingers to speak to us, so that we can change our deeds and change the future those deeds are pre-determining for us.

You see this pattern in God’s relationship with Israel. The Bible says;

“And the LORD God of their fathers sent to them by his messengers, rising up betimes, and sending; because he had compassion on his people, and on his dwelling place:

But they mocked the messengers of God, and despised his words, and misused his prophets, until the wrath of the LORD arose against his people, till there was no remedy.

Therefore, he brought upon them the king of the Chaldees, who slew their young men with the sword in the house of their sanctuary, and had no compassion upon young man or maiden, old man, or him that stooped for age: he gave them all into his hand.

And they burnt the house of God, and brake down the wall of Jerusalem, and burnt all the palaces thereof with fire, and destroyed all the goodly vessels thereof.” 2 Chronicles 36:15-19 KJV

What Israel was doing then was sharing and unpleasant future for them, and the God who lives in our past, our present and our future saw it and came down to help. He sent His prophets to warn them of the kind of future what they were doing was shaping for them, but they did not listen.

SADLY, THEY ENTERED INTO THAT FUTURE AND WHERE WIPED AWAY BY IT.

What kind of future do you think a man or women who takes the life of another has created for himself or herself? You saw in the news the boy who killed his parents and other family members in one sweep? He has created a terrible future for himself. I pity any who will have anything to do with him.

What kind of future do you think a preacher who is not living by example in words and in deeds is creating for himself and for those who hear him?

Those of us preachers, who have developed, perfected, and made lying, stealing, craftiness, or sleeping with our Church members a life style; what kind of future are we creating for ourselves? There is a onetime fall into sin that may not do us any harm, but when it because a life style, what future do you think we are creating? Do not forget, my fellow preachers, your future is not only in God’s hands, it is also in your hands.

And to those Church members who loves sleeping with us and seeing it as nothing; what kind of future do you think you are creating for yourselves? People who deliberately quench the fire of God in preachers, either by sleeping with them, defaming them, harming them or doing one evil to them or the other, do not end well. I have never seen any end well.

You don’t quench the fire of God in a preacher and have a glorious ending in life. The blood of all those he or she would have saved with his or her fire will be on your head and there will be no remedy. That is why, you can quench your own fire and, maybe go free, but don’t attempt it on a man or woman who carries God’s fire for the salvation of souls.

Many of us paid serious prices to get the fire we have for ministry; if you take advantage of our time of vulnerability to quench it instead of protecting it, you will have a future of pains that there would be no remedy!

Can you imagine someone quenching my fire? I will lock myself in a cave until all involved are roasted by divine furry. All the millions we are reaching today will also cry against them and they will fall into things that has no remedy. Most of us operate dangerous covenants with God that do not let those who quench our fire go free.

I repeat, I have never seen a man or woman who quenched God’s fire in a preacher having a glorious ending in life. What they did in the morning has a way of coming upon them in the evening.

A LOT OF PASTORS WHO HAD FIRE IN THE CITY HAVE RETIRED TO THE VILLAGE DUE TO LOSS OF FIRE.

The women who quenched them are here in the city defaming and speaking ill of them. Don’t worry, your judgment is coming.

Today, they are called expired prophets, moving shamelessly from one woman to another in the village or maybe in the city, forgeting the fire they once had for souls just because of your sexual powers or your craftiness in taking advantage of their season of vulnerability.

Your evil deeds have created a future for you. That future is not far, but very close. The only way out is to repent and restitute.

Consider this message today as a warning finger from the LORD to prevent us from coming into the future we have created with our deeds. Le us use it to repent so that sudden destruction will not come upon us instead of higher heights.

There are other ladies who are working on some fire brand preachers as we speak, basically to quench them. They want to quench them and send them to the retirement camp so that their fire will cease burning. Repent or else…there are no words to describe what will happen to you.

Child of God, here is something you must know: there are times that warriors of righteousness become weary in battle and fall. Do not take advantage of them to further destroy them. Minister to them and protect them from those giants of the flesh that came to slay them down. Don’t take advantage of the situation and quench their fire.

Too many preachers are burning out and having their fires quenched either by troublesome spouses or crafty Church members.

Yes, there are people married to preachers who specializes in quenching their fires by the troubles they give them at home. There are Church members who also do that by the troubles they give in church, or by taking advantage of their closeness to the preachers or cashing on their vulnerability. God will respond to all these and His response will not be good. Watch out!

YOU MUST BE VERY CAREFUL WHEN MARRIED TO A FIRE BRAND PREACHER OR WHEN CLOSE TO THEM.

You must be very careful when God grant you the privilege to be close to any fire brand preacher. You are not there to quench their fire. You are there to help it burn and protect it from giants. It is a very sensitive place to be as a Christian; you are in both a blessed place and a dangerous place, it all depend on your deeds.

There are so many truths in our devotional text. One of it says, “But evil men and impostors will grow worse and worse, deceiving and being deceived.” Let us make up our minds not to fulfill this prophecy. Others shows us the power of the scriptures. We must align with it.

God is calling on us not to be part of the evil men and impostors in the body of Christ who are doomed to grow worse and worse because of their unwillingness to repent of their evil deeds.

God do not want us to be caught by the future created by our evil deeds. We may not come out of the consequences. That is the fearful thing about these things.

The Bible made it clear that when you see God’s warning coming our way intensely, or His Spirit striking our conscience with a word, we are headed to an unpleasant future and God does not want that to happen. That was what happened to Israel. That is why you do not maltreat God’s messengers when they are sent to you.

You do not mock at them and the word of the LORD on their lips. If you do, you have said to GOD, “I don’t care what my deeds may be creating in future for me. Let it come!” That is how people enter into things that has no remedy! May we not be part of them.

“But they mocked the messengers of God, and despised his words, and misused his prophets, until the wrath of the LORD arose against his people, till there was no remedy.

Therefore, he brought upon them the king of the Chaldees, who slew their young men with the sword in the house of their sanctuary, and had no compassion upon young man or maiden, old man, or him that stooped for age: he gave them all into his hand.”

Someone should sit down today to think through their lives and their relationship with genuine men and women of God they served or are serving, they married or are married to, they related or are relating with, and make amends where necessary. Sometimes we blame the pastors for falling into sexual sins and forget how crafty some members can be in helping them fall.

The fall of a true servant of GOD is the fall of a portion of the Kingdom of God he or she is sustaining, and God will judge all involved with the fall. Don’t forget that and do not mix it up!

I know a man of God who was influence to fall that way and all who participated are either not alive today or are incapacitated. No prayer is working for them. The blood of the souls they neutralized the man not to save is crying against them in the spirit realm preventing any prayer from working for them.

Let he that has an ear hear what the Spirit is saying to the Churches!

“Obey those who rule over you, and be submissive, for they watch out for your souls, as those who must give account. Let them do so with joy and not with grief, for that would be unprofitable for you. Hebrew 13:17 NKJV