“Where there is no vision, the people perish: but he that keepeth the law, happy is he.” Proverbs 29:18 KJV 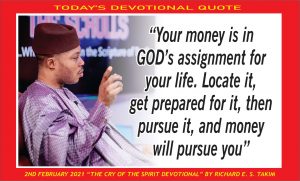 WELCOME TO THE 33rd DAY OF OUR YEAR OF HIGHER HEIGHTS

This is another day that the LORD has made, we shall rejoice and be glad in it. It is people who are living according to the visions and purposes if the Day Himself that can boldly say that. That is why the release of divine destiny is what adds color to a Christian life.

God buried our riches in our divine destiny. He made sure the storehouse of our provision is buried in His assignment for our lives. Your money is in GOD’s assignment for your life, locate that assignment, get prepared for it, then pursue it and money will pursue you.

The prosperity of the righteous is always as a result of the release of his or her divine destiny. That is why there would have been no poor one among us if all Christians had focused their faith on releasing their divine destiny in Christ Jesus.

When Israel (the Church in the Old Testament) came out of Egypt, there was no poor one among them. Everyone was made a Billionaire in one night because they all stepped into divine destiny. But when they were in Egypt doing what was not God’s assignment for their lives, everyone was good until there arose a pharaoh that knew no Joseph.

THEN POVERTY SET IN. THEY BECAME ECONOMIC SLAVES.

When they came out and stepped into their destiny of becoming GOD’s first born nation, they inherited houses they never built and vineyards they never planted. You will remain an economic slave if you are doing what is not God’s assignment for your life! You will move from suffering to suffering until you step into GOD’s placement for your life.

The early church had the same experience with GOD, like the nation of Israel. We are part of that Church if we are serving the same GOD and having the same Spirit. When souls that made up the early church came out of the outer darkness and began the Church movement, they Bible say there was no poor one among them.

The assignment of GOD for their lives was to support that explosion of grace and spread the gospel around, and they did. The result was money coming to them. The Bible says Great grace was upon them all, and there was no poor one among them.

I believe God’s vision for the end time Church is to fill us with enough money to do His will until there is no poor one among us. The vision will be fulfilled when everyone of us find His assignment for our lives, and unlock our destinies. That brings me to a very important question. -What is the worth of a man’s destiny?

I think there are no human words to describe. Only eternity will. Personally, I have seen the prosperity in one man’s divine destiny taking care of an entire lineage. I have seen people with the courage to pursue God’s assignment for their lives not lacking any good thing; I have seen them unlock so much resources that they now take care of even generations.

Personally, I started releasing my destiny and pursuing GOD’s assignment for my life at 16. A lot has come out of it. It has taken care of so many people in my life.

From personal experiences I learnt that there is no poor one on the face of the earth. We only have people who are yet to eat from the wealth in their divine destiny; people who are yet to step into GOD’s assignment for their lives. And you could be one of them reading this piece this morning.

OUR DEVOTIONAL TEXT SAID, “WHERE THERE IS NO VISION PEOPLE PERISH”.

Poverty is so unnecessary! It is always as a result of lack of vision or lack of power to unleash a vision. Yes, it is a result of not stepping into your divine assignment.

Friend, wherever God’s assignment for your life is, that is the place where your money lies. Sadly, people will prefer looking up to others for money instead of looking up to God to reveal where His assignment for their lives lies. We easily forget that depending on people to feed or creeping on the floor to have them meet our need is a curse.

Except the physically challenged; People who creep on the floor for others to give them money are shortchanging themselves. That is why God did not create the first man a dependent. He created him to be very wealthy through the release of divine destiny; yes, He attached his wealth to His assignment.

The pattern remains the same. All the wealth you will needed is placed in God’s assignment for your life. God literally put gold in the place of Adam’s divine destiny, and as he released it there was no lack in his life. In fact, poverty came when he was driven away from his assignment and the appointed place for it.

Once again, your poverty and financial struggle is a proof that you are not in God’s assignment for your life! The only creature that was created to creep with its belly was the snake and other creeping things of the earth. You are not a creeping thing of the earth. Stop begging to survive. Start looking into the Spirit to locate your divine destiny. That is where your money is.

ONE THING GOD WILL DO TO HELP US LOOK INTO OUR DESTINY IS TO SHUT THE HEARTS OF MEN NOT TO ASSIST US AGAIN.

That was what happened to me. I usually beg to survive. That was before I was 16. But God changed my mentality and made me to understand that begging is not part of the covenant. I insult Him each time I do so.

When I hit 21, I was already in full throttle pursing my destiny and was richer than my peers. Though there have been ups and down in my financial life because of the responsibility I shoulder, God has always used the release of my destiny to supply my needs.

The truth is “GOD’S MAN IN GOD’S APPOINTED PLACE, DOING GOD’S WILL IN GOD’S APPOINTED TIME WILL NEVER LACK GOD’S PROVISION.” If you lack supply, there is something wrong with you! If there is no accuracy in the revelation of your divine destiny and the power to unleash it as a minister of the gospel, you will see ministry as a begging machine.

As we embrace the second day of the second month of our year of Higher Heights, remember that all you need is vision of your divine destiny or God’s assignment for your life, and the power to unleash it. You do not need that friend or foreigner, that uncle or aunty of yours with excess money. You do not need donor agencies to survive. You just need to identify your assignment, get prepared for it and move into it.

If GOD really called you into ministry, you’ve got all you need to prosper financially. Stop insulting God and start unleashing the assignment He has called you into, without allowing your need to influence you. You may not need to start big, just begin small and you will see the favor of the LORD that rest on people who do not despise days of small beginnings breaking forth in your life.

LET THIS SCRIPTURE BE AN ADDITIONAL MEDITATION FOR YOUR DAY!

“Then Isaac sowed in that land, and reaped in the same year a hundredfold; and the Lord blessed him. The man began to prosper, and continued prospering until he became very prosperous;” Genesis 26:12-13 NKJV