Come, behold the works of the Lord, who has made desolations in the earth.

He makes wars cease to the end of the earth; He breaks the bow and cuts the spear in two; He burns the chariot in the fire. Psalms 46:8-9 NKJV 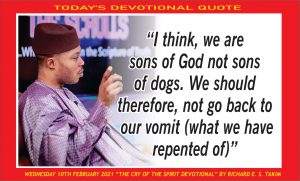 WELCOME TO THE 41st DAY OF OUR YEAR OF HIGHER HEIGHTS

We bless the God of Heaven and earth for giving us another day. Marvelous has been His deeds and that our souls know very well. The Heavens declared His glory and our lives testify of His everlasting love. He has not been dealing with us according to our sins but according to the multitude of His mercies.

Today we are doing to revisit a well of truth that was dug few years back on this platform. Wells of truth do not run dry, irrespective of how long they might have stayed, they still carry substance for the refreshing of our souls. Time do not dry them. Time only make them better.

So as we visit this piece of devotional written four years back, I believe it will be a refreshing for us. Open your heart, open your mind, and you will hear the LORD speaking to you through it.

When our LORD and savior Jesus Christ walked physically on this earth over 2000 years ago, He did so many things and said so many things that were not even written in scriptures. That was God manifesting, not just as a redeemer but as a peace maker.

I believe God wanted everything seen and recorded that was why He performed the miracles. That is one way He makes Himself known. Recording all of them would have just fulfilled that vision. But as it has always been; the frailty and inadequacy of humanity could not capture all that Jesus did; all He wanted to be captured and preserved for subsequent generations including our generation.

The manifestation of God as redeemer and prince of peace are some of His works that must be declared to the next generation so that they may know and fear Him. If all had been captured it would have made a whole lot of difference.

Frequently, mankind does find Himself in spiritual seasons where God wants Heavenly things received and made known on earth. But our frailty does not always allow us to get all of the things down here. Some times our minds are too weak to capture them.

But in the beginning it was not so.

Adam could keep pace with God during every Spirit to spirit communication. The fall of man is what reduced our ability to keep pace with God the way he did. God inhabits eternity and speaks to us in time, that is why things do happen that way sometimes.

Jesus did and said so many things when He was physically on earth that the frailty of humanity then could not capture and store up for subsequent generations except for what we find in the Holy Scriptures. He manifested as God who redeems and make wars to cease in the lives of men.

THAT IS THE PEACE MAKING ASPECT OF GOD.

One of the things Jesus said that was captured and written down in the Bible for us is what we call the “signs of the end” and what He called “the beginning of sorrows.” He said nations will rise against nations, there will be bitter betrayal even among blood relatives, and there will be earthquakes, wars and rumors of war among other things.

But all that will be preceded by hyper deception.

It is in the midst of war that He do manifest as a peace maker by causing wars to cease. He also does manifest as a man of war in time of war, just to save His own. So in seasons of wars and rumors of war we must understand that. Our devotional text today said;

“He makes wars cease to the end of the earth; He breaks the bow and cuts the spear in two; He burns the chariot in the fire”

If God makes wars to cease, then He will step into the theater to manifest a presence that will protect His own this end time.

However, He will not intervene to stop the wars and rumors of wars globally. It is part of a redemptive process to allow wickedness to destroy itself and bring us to an age of peace that will last for a thousand years. He will only intervene to protect His own in the midst of it all.

He will not just protect His own, He will one day take them out of the earth at the point of its total collapse and bring us back after seven years to rule and reign with Him. That is what the Bible calls the blessed hope.

The blessed hope makes giving our Lives to Christ and walking in the ways of God the most important thing to do on this side if eternity. Because if we do not give our lives to the LORD and walk in His ways; living His life on the face of the earth, we won’t be among the redeemed that will be in the new Heaven and new earth where Righteousness dwells.

We will miss the blessed hope and be lost forever when the prophetic events will take place. I therefore submit to you that GENUINE SALVATION IS THE GREATEST BLESSING OF GOD FOR MANKIND!

Now, the Bible did not say God will take away the righteous from the earth when these things begin to take place. He will take us away when it gets to the zenith. It is when we are close to the very end that He will rapture us, His Church from the earth. But before then, we will be here seeing every bad things happening.

It is therefore important that we know how to survive in the midst of these wars as prophesied by the LORD.

Sometimes I get terrified by what is about to happen. But the LORD has assured us in His word that no matter what may be happening in the world during the days we find ourselves, He will manifest as a man of war and peace maker to make wars to cease around those His blood has washed and His Spirit has filled.

These are the things that make me strife daily to live a life worthy of my calling. And I urge you to do the same. Righteousness will be our life insurance these end times not prayer, fasting, or sowing seeds. Prayer and fasting are important aspects of our faith, but they will not be what will insure us this end times except they are done in righteousness.

Anything that will not be done in righteousness will not insure us from the horrors of the last days. Isaiah saw this and prophesied saying;

Indeed they shall surely assemble, but not because of Me. Whoever assembles against you shall fall for your sake.

No weapon formed against you shall prosper, and every tongue which rises against you in judgment you shall condemn. This is the heritage of the servants of the Lord, and their righteousness is from Me,” Says the Lord.” Isaiah 54:14-17 NKJV

WHAT DO YOU SEE IN THIS SCRIPTURE?

Yes, it is when we align and lead a righteous life that tongues rising against us are condemned.

It is going to get darker down here. Get ready my friend!

The word of Isaiah concluded with the statement “this is the heritage of the servants of the LORD.”

It is those who are walking with the LORD in righteousness that will enjoy the heritage of seeing Christ manifest in their lives both as a peace maker and man of war this end time. These are the things that god has decreed to come to us in righteousness.

And we must understand that what God has decreed to come to us by righteousness can never come to us by any other means. If every act of our giving and sacrificing towards God’s work, or praying and fasting is done in righteousness, we will unleashed a glory on the face of the earth that eyes has not seen, ears heard or hearts conceived.

The will of God is that as darkness cover the earth, the glory of the LORD should be risen upon us! But that will never happen, until we get ourselves established in righteousness.

As I bring this to a close, I want you to understand that the greatest things that will ever happen to you as an end time Christian will come to you by leading a life of righteousness. If we will add righteousness to our tithing, offerings, sacrifices, prayer, and fasting, we will be the most glorified people on the face of the earth. We will move in waves of glory and operate in higher heights.

Wars will cease in our lives and peace will become permanent.

Awake to righteousness and you will come into the inheritance of the righteous spoken of by Isaiah.

“Do not be deceived:” Evil company corrupts good habits.”

Awake to righteousness, and do not sin; for some do not have the knowledge of God. I speak this to your shame. 1 Corinthians 15:33-34 NKJV