“Therefore, since we have this ministry, as we have received mercy, we do not lose heart.

“But we have renounced the hidden things of shame, not walking in craftiness nor handling the word of God deceitfully, but by manifestation of the truth commending ourselves to every man’s conscience in the sight of God.”

“But even if our gospel is veiled, it is veiled to those who are perishing, whose minds the god of this age has blinded, who do not believe, lest the light of the gospel of the glory of Christ, who is the image of God, should shine on them.” 2 Corinthians 4:1-4 NKJV 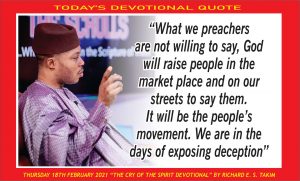 WELCOME TO THE 49th DAY OF OUR YEAR OF HIGHER HEIGHTS

One way you know a man or woman in Church who is perishing is in how he or she handles the word of truth and righteousness. If what the Bible says has been made clear by the Holy Ghost directly or indirectly to them, and they still cannot agree with truth, it’s a sign that the gospel has been veiled to them, and that if they die they may not make heaven.

The ministries that are removing veils from hearts have renounced the hidden things of shame. In other words, they do not walk in craftiness calling it wisdom nor handle the word of God deceitfully. Their ministries are simply driven by a pure motive not by a money motive; hence the manifestation of the truth is what you see.

End time prophecies tells us there will be ministries that will specialize in putting veils of deception in people’s hearts. That is why we do not need a prophet to tell us about future events or any other if he is not established in Bible prophecy. Sadly, the church today is full of believers who do not have a hint of what Bible prophecies are. With the kind of events happening now, if there is any time to look into Bible Prophecy and be established in it, it is now.

Apart from warning us of what is to come, it will reinforce our faith in Christ and helps us purify ourselves for the age to come. The Bible says,

“Beloved, we are [even here and] now God’s children; it is not yet disclosed (made clear) what we shall be [hereafter], but we know that when He comes and is manifested, we shall [[a]as God’s children] resemble and be like Him, for we shall see Him [b]just as He [really] is.

And everyone who has this hope [resting] on Him cleanses (purifies) himself just as He is pure (chaste, undefiled, guiltless).” 1 John 3:2-3 Amplified

Walking in the revelation of Bible Prophecy has a way of enhancing holiness, as we can see in this scripture. It says that everyone who have this hope in him; who knows what lies ahead is getting ready for it, purifies himself just as Christ is.

Church history tells us that the most solid Christians in the early church were those who were taught bible prophecy as soon as they gave their lives to Christ. That alone is a lesson that if our faith is anchored on the revelation of the ages to come, we will remain solid in Christ and hell will never have us back; especially, in a season of the falling away like the one we find ourselves.

So many today, are departing from the faith that was once delivered to the saints and God wants it stopped. He wants this population of hell through hyper deception to stop.

Jesus indeed warned us that as we approach the end of times and days, there will be catastrophic events that will shake the human world. But these events will be preceded by hyper deception both in the Church world and the outside world.

In our devotional yesterday, we did share on “hyper deception” and made it clear that it will take a daily cultivation of “Hyper Spiritual sensitivity” and “Deep Discernment” for us to be able to deal with and overcome the scourge. It means if you will not cultivate Spiritual sensitivity and deep discernment this end times, you will be a victim of deception.

Actually, people are in hell today because of deception.

SOME EVEN DIED BELIEVING THE LIE THAT SAYS JESUS IS NOT GOD BUT A PROPHET, HENCE ENDING UP IN HELL.

While others who believed in His redemptive death believes that He died for their sins, but they do not believe that they have to accept that sacrifice for their sins by living His life on the face of the earth; a life of Holiness and righteousness. To these unfortunate ones the grace of God was “a license for sin” instead of “a pardon from sin” and “an empowerment to go and sin no more.” They called Him, “LORD, LORD” but do not do what He said.

That is why the Bible made it clear that except there is genuine repentance, none among us today will see His blessed face when we die if we are calling Him LORD, LORD, but not doing what He says in the Bible about Holiness, righteousness and etc.

So people go to hell because they are deceived. That is why Heaven considers ministries that are raised by God to expose deception and deal strongly with it as some of the greatest ministries born on the face of the earth. The true gospel of Jesus Christ actually exposes deception. Don’t forget, He is the way the TRUTH and the life. Truth will indeed expose falsehood.

Personally, if I had not encountered one of the few ministries that exposes deception in my days of being separated from the error in Church, I would not have taken my separation seriously. What God was telling me then would have not made meaning to me as much.

God had to bring me in contact with those great but unknown men and women to further reinforce what I already knew is not part of the gospel of our LORD and savior Jesus Christ as an upcoming Christian and preacher. Honestly, I had already been deceived to become part of the half-truth preachers in Nigeria when the LORD intervened.

I remember attending conferences in Nigeria that were capable of turning any preacher into money spinning machine or a diviner called prophet. We were told by those we considered fathers that any gospel we are preaching that is not bringing money and men to us should be thrown away. It was all about money and crowds, not about getting Christ formed in people.

So I would have been doing ministry today believing that the anointing oil is the Holy Spirit, and leading people to pray with sand, salt, candles, mats, bottles of Water, etc. Maybe I would have constructed a healing pool, and be taking people to their villages for deliverance ministry.

I WOULD HAVE BEEN DISHING OUR MONEY SCOOPING REVELATIONS AND PROPHECIES TO THE NAÏVE AND SMILING TO THE BANK SAYING “THE LORD IS GOOD.”

I would have taken sorcery for prophecy and divination for prophetic ministry and yet not know that I have been deceived and that I am being used to deceive others. Ministry to me would have been all about how much money I can scoop from people through the promise of liberty and miracles and all that.

Sleeping with the beautiful woman and young girls who come to me for pastoral oversight would have being nothing to me. But mercy said no! God met me early enough and saved me from the dissipation and corruption we are seeing in Church today.

I can tell you, Child of God, that if you are not planted in a ministry that is raised by God to deal with hyper deception these end times, you will become a victim of deception. Sadly, every deceived person believes that he is the one walking in truth and that others are in error.

Just as a mad man sees sane people as mad, so do deceived people see those walking in discernment as mad. I have never seen a deceived person who does not treat those who know the truth of the gospel as mad. Deception is actually akin to insanity! That is why God is using the few He has set apart for Himself to expose it and deliver the hearts of men from it.

For instance, those who are being told to sleep with prophets and prophetesses for cleansing are doing it trusting that God will really visit them.

They don’t see anything wrong with it until the promises they got from those prophets fail to come to pass. Those who are being told to sow this seed and that one, and will get that miracle or this blessing, or drink this oil and that oil and will get one breakthrough or the other, are seeing nothing wrong with the rituals.

In fact, if you try to show them what the Bible says about what they are doing, they will say you are judging them or criticizing their man of God. They have been deceived or “zombified” hence not seeing the light of the gospel.

A MAJOR HIGHLIGHT IN OUR DEVOTIONAL TEXT TODAY SAYS,

“But even if our gospel is veiled, it is veiled to those who are perishing, whose minds the god of this age has blinded, who do not believe, lest the light of the gospel of the glory of Christ, who is the image of God, should shine on them.”

One day I was worried about people in Church complaining that my teachings are too deep. Even some pastors will come up with rebukes and other corrections, telling me that they don’t even understand what I am saying that I should water it down. I was worried because young believers and those who are not even born again understood me perfectly.

Then it began to dawn on me that it was not that they did not understand me; they really understood me but their hearts just refused to accept what they understood because of the religious veils in their hearts. If there are veils in your heart, the Bible says it’s a sign that you are perishing.

Apart from perishing eternally, there is perishing also in time. People are perishing in marriages, financial troubles, sinful habits, and etc. God wants them free! However, they must have the veils in their hearts dealt with.

The purpose of present day apostolic and prophetic ministries by content (not by Titles) among other intents, is to deal with the veils in the heart of believers so they can step into realms where deception and error can no longer ensnare them. That realm is a realm of God’s glorious Light!

You cannot get to that realm drinking from fountains where preachers preach themselves and how to get earthy success instead of preaching Christ.

“For we do not preach ourselves, but Christ Jesus the Lord, and ourselves your bondservants for Jesus’ sake.”

“For it is the God who commanded light to shine out of darkness, who has shone in our hearts to give the light of the knowledge of the glory of God in the face of Jesus Christ.” 2 Corinthians 4:5-6 NKJV