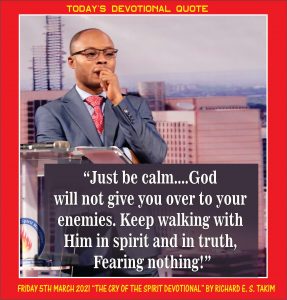 WELCOME TO THE 64th DAY OF OUR YEAR OF HIGHER HEIGHTS!

Let us begin this day by thanking God for His marvelous works in our lives and for giving us another day. Thank Him for the breath in your nostrils, the blood in your veins, the peace in your heart, and His love towards you. The Bible says God commanded His love towards us in that while we were yet sinners, Christ died for us.

Thank Him for setting us free from eternal damnation and getting us saved. So many are not saved because they resisted the gospel, others are not saved because they are born in nations and cities that will not let them know the LORD. The devil just wants them to go to hell by default, hence using their leaders to shut their nations from the gospel of our LORD and savior Jesus Christ.

While we pray for them to receive intervention from the LORD, it is very important that we thank God for saving us and for not being born in such territories. Some of us started hearing about Jesus from our mother’s womb, so to speak; while these souls know nothing about Him just because of where they were born.

I believe the last frontier for God’s end time warriors will be in those nations, because God is already doing a thing that is gradually opening all of those nations up to get the true gospel published in them. I hope He finds us worthy to be sent there when the time finally comes.

Now, four years ago I wrote a devotional that was prophetic in nature (well all our devotionals have been prophetic). I consider it prophetic because it was sent to help someone in battle at the immediate present. And because the word of the LORD does not die, I feel strong in my spirit to bring that devotional to your attention this morning.

It is my prayer that as you read and meditate on its words, God will repeat in your life what He did in our lives then when it was first published in Jesus precious name. Sometimes the battles of life can be so terrible, needing words in season like that to come out victorious.

May you find that this morning in Jesus precious name.

THE WORD OF THE LORD FOR PEOPLE IN BATTLE.

I hear the LORD saying to my spirit that “I will not give you over to your enemies.” I don’t know what you may be going through but that is His Rhema Word to us today. By today, I mean this moment that you are reading this. It is your time of visitation!

Divine proclamations are hallmarks of divine visitations. So if you will behave like Mary did in her own time of visitation and say to the LORD, “Behold the maidservant of the Lord! Let it be to me according to your word” there will be a move of God in your life that will surprise all who have joined themselves with the Devil to harm or hurt you.

When Israel were reduced to slaves in Egypt; when His chosen generation, royal priesthood, and holy nation became the economic tools of Egypt, HE ROARED FROM THE THRONE ROOM AND MOSES PICKED IT IN THE BURNING BUSH. Few weeks later the gods of Egypt were smashed, the first born killed and the people of God liberated!

Whatever and whoever represents Egyptian bondage in your life, will begin to go down from this moment! God said I should tell that no matter what you may be going through, He will not leave or forsake you. He will make sure that you are not given over to the will of your enemies.

You may be in the mouth of an aggrieved prophets or prophetesses who have reduced themselves into wolves in the body of Christ, slaughtering the sheep of the master; a victim of ministers of the gospel who curses people for not giving tithes, misinterpreting the scriptures to suit their greed for God’s tithe, God says I should tell you He will not leave you in their hands or hand you over to the will of your enemies.

God hates it when we are given over to the will of wicked pastors and church leaders who have become the gates of hell, resisting the ways and word of the LORD. He hates it when the so called born again Christians come to defraud and betray us to our enemies.

HE CRIED THROUGH EZEKIEL SAYING

“Behold, I am against the shepherds, and I will require My flock at their hand; I will cause them to cease feeding the sheep, and the shepherds shall feed themselves no more; for I will deliver My flock from their mouths, that they may no longer be food for them.”

“Behold, I Myself will judge between the fat and the lean sheep.”

“Because you have pushed with side and shoulder, butted all the weak ones with your horns, and scattered them abroad, therefore I will save My flock, and they shall no longer be a prey; and I will judge between sheep and sheep.” Ezekiel 34:10, 20-22 NKJV

When He saw David being given over to the will of Saul He swiftly intervened, handing over even the life of Saul to David. Because it was a test of submission to divine will, David did not kill him but rather handed him over to God.

You don’t kill who God has decided to kill, neither do you attack who God has placed on His attack list. That was the principle David knew!

But what amazed me most was that God handed over the life of the man who was looking for David to kill into David’s hands. That is what it means to have “your hands on the neck of your enemies.” That is the heritage of the tribe of Judah we all share in!

I declare unto you that God will begin to hand over the lives of those who want to dead into your hands, in Jesus precious name!

WHY ARE WE SOUNDING LIKE THAT, YOU MAY ASK?

You see, God manifest Himself sometimes according to His prophetic agenda in a man’s life. He reveals Himself according to the times and seasons a prophetic people find themselves.

This is a season of war in the heavens and He want to reveal Himself in a dimension we have never seen. That is why we are sounding this way. The Bible says,

“Surely the Lord God does nothing, unless He reveals His secret to His servants the prophets.

“A lion has roared! Who will not fear? The Lord God has spoken! Who can but prophesy?” Amos 3:6-8 NKJV

We are prophesying because the LORD God has spoken! Our devotional text this morning says,

There is no god, devil, politician, king, prince, or fierce messenger of death with a recognize title of ‘man of war’ in the spirit. Only the Almighty God has that title.

That is why such men and spirits become like wax in His hands whenever He moves against them. It was the revelation and manifestation of God as “a Man of War” that stirred Paul to ‘scream in one of his letters’ saying;

“What then shall we say to these things? If God is for us, who can be against us?”

“He who did not spare His own Son, but delivered Him up for us all, how shall He not with Him also freely give us all things? Who shall bring a charge against God’s elect? It is God who justifies.”

“Who is he who condemns? It is Christ who died, and furthermore is also risen, who is even at the right hand of God, who also makes intercession for us.” Romans 8:31-35 NKJV

Paul saw How God helped him against the beats of Ephesus and the political force of his days before sending that letter. He saw how God fought for Him when he landed in the shadows of death. He suffered than all the apostles yet He was not broken because God was with Him as a man of war.

If you have this “Man of war” by your side, it does not matter who is against you. They will all fall like dead trees and be carried away by the storms of His furry. You will end up looking for them and not see them.

WHAT IS THE MESSAGE OF OUR DEVOTIONAL THIS MORNING?

The message is a simple prophetic word for someone in need of divine rescue. It says “God will not hand you over to the will of your enemies.” Cheer Up!

But allow me to quickly point out that this word is not for everybody. It is for those whose prophetic and eternal destinies are under threat, and all who are ready to fight and not BE AFRAID. If God is for you, and you do not stand in battle to fight but walk in fear, you will fail. You do not walk in fear when God is on your side.

So this word is for those who are ready to fight and not chicken out in fear.

Yes, it is also for those who are already fighting the battles of the LORD for this end time. God will not reveal Himself as a man of War in the lives of those who are doing nothing with Him in the frontiers of war.

The word is for those who are contending for the faith that was one delivered to us. People who need to be rescued and activated to stand and do God’s will in this generation.

In simple terms the word is for warriors of righteousness – both active and potential. They are the ones God asked me to speak to today.

In the words of Gabriel to Mary I close this word;

“Blessed is she that believes for they shall be a performance of those things spoken to her by the LORD.”

MAKE THIS SCRIPTURE AN ADDITIONAL MEDITATION FOR YOU THIS WEEKEND!

“Don’t be afraid. I am with you. Don’t tremble with fear. I am your God. I will make you strong, as I protect you with my arm and give you victories.”

“Everyone who hates you will be terribly disgraced; those who attack will vanish into thin air. You will look around for those brutal enemies, but you won’t find them because they will be gone.”