“After the death of Moses the servant of the Lord, it came to pass that the Lord spoke to Joshua the son of Nun, Moses’ assistant, saying:

“Moses My servant is dead. Now therefore, arise, go over this Jordan, you and all this people, to the land which I am giving to them — the children of Israel.

Every place that the sole of your foot will tread upon I have given you, as I said to Moses.

This Book of the Law shall not depart from your mouth, but you shall meditate in it day and night, that you may observe to do according to all that is written in it. For then you will make your way prosperous, and then you will have good success. Joshua 1:1-4, 8 NKJV 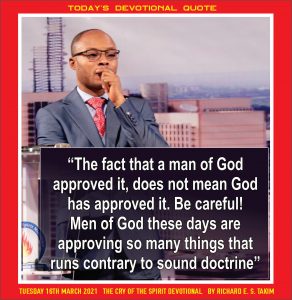 WELCOME TO THE 75TH DAY OF OUR YEAR OF HIGHER HEIGHTS!

It has been 75 days of His goodness, mercies and compassion. It’s been 75 days of receiving His word, living truths and divine light. Truly, those who walk in the LORD will never walk in darkness. The reason is simple; He is the light of the world. Whoever the devil is and whatever he does is called darkness.

Whatever is not true, honest, just, pure, lovely, good, virtuous or praise worthy falls into the category of things God called darkness. That is why the Bible warned us of walking in them. When we walk in in them we are walking in darkness. And demons will have unhindered access to our lives to kill, steal and destroy. The Bible says,

Thinking on the things that are categorized in this scripture is one way not to walk in darkness, and these devotionals falls in line. If you do not want to build a dwelling place for darkness in your life, you must learn to put scriptures like this into use by making sure that whatever does not fall into the category of what is true, honest, pure, just, and etc. is not meditated upon.

People build thrones for Satan in their hearts by not doing that.

When a throne for Satan is built in your hearts, you will become mindful of the things of men and not the things of God. You will even be used to contend with or kill, steal, fight, defame or destroy God’s faithful witnesses.

There are so many people with thrones for Satan in their hearts, that is why the world is in crisis. As human beings whose days on this earth are not forever, it is important that we do not spend any moments of our lives walking in darkness.

Yes, it is important that we spend our moments in time making sure whatever is not true and hones, just and pure, lovely and of a good report, virtuous and praise worthy, is not given any attention or place in our hearts.

I want to take back into time to one of the most beautiful devotionals that has ever been written on doing the word of God; a good report from the word of the LORD, something just and pure, true and honest to think about. This was written over four years ago.

A DOING OF THE WORD

Apostle James was one of those early apostles the LORD used to talk to us about a Christianity with godly character and holy habits. He was a Pharisee before becoming a Christina, that is why you can find one piece of Judaism in his book; the admonition to use oil in prayer.

The book of James holds so much truth for us today. But it’s so sad that many preachers only hold on to the piece if Judaism in that boo, James 5:14. I wish we are holding on to the great truths taught in that book about the use of the tongue, how not to maltreat the poor, the faith that will help us make heaven and etc. But we hold on to James 5:14 because it helps us to keep using the olive oil and making money form the stupidity of people.

There is a part of the book of James that’s spoke about being a doer of the word. It is one of the best portions of the scriptures. If we hear the word and do not do it, the Bible made it clear that we have deceived ourselves. And such self-deception will not allow our eternal or divine destinies to be unleashed.

DOING THE WORD WILL UNLOCK YOUR DESTINY

When God was commissioning Joshua for ministry, one major instruction He gave him is what our devotional text captured this morning. A major highlight in the text said;

This Book of the Law shall not depart from your mouth, but you shall meditate in it day and night, that you may observe to do according to all that is written in it. For then you will make your way prosperous, and then you will have good success.

If you look at this scripture carefully, you will discover that Joshua’s success in the release of his divine destiny was not anchored on sowing financial seeds into another ministry. It was not anchored on even prayer and fasting – as good as it is to pray or fast. It was anchored on doing the word of the LORD.

Now, don’t get me wrong, giving the support the spread of God’s word, praying and fasting are very important acts of worship in the kingdom and in the pursuit of divine destiny. But these same beautiful acts have been desecrated by those who are polluting Gilgal and Bethel.

These acts of worship have their own place in our walk with God. But nothing can substitute doing the WORD of the LORD in the release of divine destiny.

It takes a doing to unleash divine destiny and have good success not just a hearing. In other words, if you do not add HOLY SPIRIT LED and SCRIPTURAL BASED ACTIONS to your divine destiny, it will not be fulfilled.

PEOPLE WHO DO THE WORD CHANGE THE WORLD.

People who walk in complete obedience to the voice or word of the LORD will be remembered for the great things God used them to do. If you want to leave a mark on the sand of time when your days will be over on the face of the earth, you have just found the key.

When Saul, the first king of Israel, became king, prophecies made it clear that his Kingdom was to continue to the next generations. That was his prophetic destiny.

His lineage was favored by the LORD to be Israel’s first King and lead the nation, from generation to generation. But that divine plan for his life was not fulfilled. He killed it using the internal power of rebellion. He was not part of the breed that could do the word of the LORD. Hence, losing everything!

The first word God gave him to do was an instruction to wait for seven days at Gilgal until Samuel the prophets comes to establish his kingdom over Israel. He actually waited, but could not complete his obedience. The worse thing about his waiting was him going ahead to do a sacrifice that only a prophet was ordained to do. That was how he began to cancel his divine destiny.

The next word He could not do was the complete annihilation of the Amalekites. God has sent Samuel to him with this instruction;

“Thus says the Lord of hosts: ‘I will punish Amalek for what he did to Israel, how he ambushed him on the way when he came up from Egypt.”

“Now go and attack Amalek, and utterly destroy all that they have, and do not spare them. But kill both man and woman, infant and nursing child, ox and sheep, camel and donkey.'” 1 Samuel 15:2-3 NKJV

But this again he could not do. He obeyed the LORD but partially.

The fact that a man of God approves a thing does not always mean God has approved it. Men of God these days now approved so many things that the Bible runs contrary against.

The approval of men of God does not make it an approval of the God of the men. You must be careful!

Saul would later abort his divine destiny and fall under the sword of divine judgment. The Bible gave two reasons why God killed him. The Bible says because He did not obey the voice of the LORD and because he consulted a witch.

What is the message this morning?

The message is simple; your divine destiny is full of divine instructions to be obeyed and divine commands to be executed. If you do not develop the mindset of swiftly doing the word of the LORD, you will abort God’s plan for your life and come to a tragic end like Saul. That is the message!

If you live in Nairobi, make sure you join us this Sunday 8:00 am at our apostolic center, 680 Hotel Kenyatta Avenue, for a Prophetic national Sunday service. It will be broadcasted live on Citizen TV.

LET THIS SCRIPTURE BE AN ADDITIONAL MEDITATION FOR THE DAY;

Now the word of the Lord came to Samuel, saying, “I greatly regret that I have set up Saul as king, for he has turned back from following Me, and has not performed My commandments.” And it grieved Samuel, and he cried out to the Lord all night.

So when Samuel rose early in the morning to meet Saul, it was told Samuel, saying, “Saul went to Carmel, and indeed, he set up a monument for himself; and he has gone on around, passed by, and gone down to Gilgal.” Then Samuel went to Saul, and Saul said to him, “Blessed are you of the Lord! I have performed the commandment of the Lord.”

But Samuel said, “What then is this bleating of the sheep in my ears, and the lowing of the oxen which I hear?” And Saul said, “They have brought them from the Amalekites; for the people spared the best of the sheep and the oxen, to sacrifice to the Lord your God; and the rest we have utterly destroyed.”

Then Samuel said to Saul, “Be quiet! And I will tell you what the Lord said to me last night.” And he said to him, “Speak on.”

So Samuel said, “When you were little in your own eyes, were you not head of the tribes of Israel? And did not the Lord anoint you king over Israel?

Now the Lord sent you on a mission, and said, ‘Go, and utterly destroy the sinners, the Amalekites, and fight against them until they are consumed.’ Why then did you not obey the voice of the Lord? Why did you swoop down on the spoil, and do evil in the sight of the Lord?”

And Saul said to Samuel, “But I have obeyed the voice of the Lord, and gone on the mission on which the Lord sent me, and brought back Agag king of Amalek; I have utterly destroyed the Amalekites.

But the people took of the plunder, sheep and oxen, the best of the things which should have been utterly destroyed, to sacrifice to the Lord your God in Gilgal.”

So Samuel said: “Has the Lord as great delight in burnt offerings and sacrifices, as in obeying the voice of the Lord? Behold, to obey is better than sacrifice, and to heed than the fat of rams.

For rebellion is as the sin of witchcraft, and stubbornness is as iniquity and idolatry. Because you have rejected the word of the Lord, He also has rejected you from being king.” 1 Samuel 15:10-23 NKJV