“His delight is in the fear of the Lord, and He shall not judge by the sight of His eyes, nor decide by the hearing of His ears;”

“But with righteousness He shall judge the poor, and decide with equity for the meek of the earth; He shall strike the earth with the rod of His mouth, and with the breath of His lips He shall slay the wicked.” Isaiah 11:3-4 NKJV 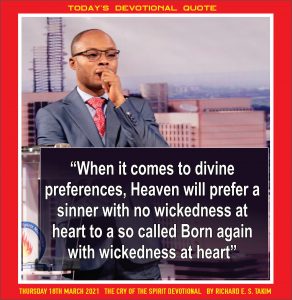 WELCOME TO THE 77th DAY OF OUR YEAR OF HIGHER HEIGHTS!

It’s a great day again today. Welcome to another glorious opportunity from the LORD to learn from Him through our devotional.

Today we will be refreshing our minds on the subject of right relationships.

Have you ever wondered why Jesus did not make the scribes, Sadducees and Pharisees His disciples? After all they were more knowledgeable in the things of God in those days than any other people, and Jesus Himself was a Pharisee by religious upbringing.

Have you wonder why He preferred the ignorant Fisher men, the financially corrupt tax collector, and people who had no business with the synagogue to these religious people He grew up with?

Someone may say “grace was at work,” that could be.

However, if you think through the principles that governs right relationships, you will discover that it was not just grace that qualified these people, because the Bible made it clear that “if grace is shown to the wicked they will not learn righteousness; in the land of uprightness they will deal unjustly” (Isaiah 26:10).

By the standard of the law, some of the disciples like Matthew the tax collector were too wicked to be included into the team. What qualified these people was not just grace but the nature of their hearts. Though they were lost sinners needing a savior, they were not wicked at heart like the scribes, Sadducees and Pharisees.

Have you read Matthew 23 and see the kinds of hearts those guys had? They were wicked. Jesus called them brood of vipers and sons of hell.

HE WAS NOT “INSULTING” THEM BUT “DESCRIBING” THEM!

If God is looking for a man to use in advancing His course among us, He will prefer the sinner to the wicked at heart; He will show grace to the sinner whose heart is not contaminated by wickedness, wash him of his sins, and make use of him. But the religious and wicked will be abandoned!

Those Jesus made His disciples by all religious standard were truly the wrong people to receive the mantle from Him and become apostles. But by heart standard, they were the Right people.

Friend, when it comes to relationships, you do not look at people’s faces, training or qualifications, you look at their hearts. If you look at their faces, you will make even the day your wife, husband, pastor, business partner etc. One major degree that everyone has these days, even without going to school, is a PhD in Theatre Arts.

We all know how to interpret roles, how to act who we are not at heart, how to profess great things with our lips but stay very wicked at heart.

People know how to look what we want them to look right before our very eyes but when we are not there, they are different kind of people. I have seen that mostly with so called Christians since I became a preacher and even with some of the people who serve with me.

One major reason we fail in the area of relationship is this; we accept the wrong people into our lives because of the judgments of our human nature concerning them. But Jesus manifested in the Old Testament as “the LORD God” and made a statement to one of His Prophets which is considered a standard for choosing who should be with us in life. He said;

..”Do not look at his appearance or at his physical stature, because I have refused him. For the Lord does not see as man sees; for man looks at the outward appearance, but the Lord looks at the heart.” 1 Samuel 16:7 NKJV

IF YOU LOOK AT THIS SCRIPTURE YOU WILL SEE TWO LEVELS OF PERCEPTION OR TWO KINDS OF SIGHT.

How God SEES people and how man SEES people. That is why both access and accept relationships differently. God will ACCESS, ACCEPT or REJECT a relationship based on spiritual heart conditions; in other words, by looking at the heart. Man will do the same but by looking at physical conditions or outward appearances. That has been the reason for our destruction.

Consequently, man looks at the outward appearance while choosing a friend, a staff, a wife, a husband, a pastor, a business partner, a trusted ally and etc. He makes judgment based on the sight of his eyes, hearing of the ear and the satisfaction the person or people brings into his life at the moment. And sometimes these things will be so loud to him – louder than what God may be saying quietly in his spirit. Don’t forget, God speaks in a still small voice.

That is why you find us sometimes in a state of shock or disbelieve if we eventually find out how the hearts of those we brought into our lives looks like; when we get to know who they really are in the process of time. Most times it becomes impossible to separate from them. That is when the relationship dies.

But God is different, that is why people who operate at His level do not have problems. I am yet to see a Child of God ensnared by the devil through a Wrong Relationship who was not warned in one way or the other by the LORD. everyone is always warned but we usually do not pick GOD’s warning signs.

God has a supernatural alarm system attached to every man’s soul. That alarm system is designed to scream at us each time we are stepping into a wrong relationship or bringing wrong people into our lives. The only problem has always been rebellion.

LIKE EARLIER STATED; THESE THINGS HAVE A WAY OF SOUNDING LOUDER IN OUR SPIRITS THAN THE ALARM OF THE LORD.

Sadly, so many of us have damaged this alarm system through persistent rebellion. Now, it either malfunctions or do not speak to us at all. In the lives of so many, it is dead! But Christ has set this season aside to repair or replace it in our hearts. That is why He is bringing these truths our way.

When this alarm is fixed, you will no longer judge after the hearing of your natural ears or decide based on what your natural eyes tells you about people.

You will not even be deceived by their generosity or the momentary satisfaction they bring. You will begin to judge the way Adam did before the fall – the very way Jesus Himself judged things, when He was physically here as the second Adam to redeem and restore us again.

Adam in the Garden of Eden never operated at our present level of “seeing” or “hearing.” He was never natural but supernatural. That was why he was able to name the animals on earth with names that God had already given them in Heaven.

I believe Mankind was not originally designed to look at the outward appearances of things but to look at the heart – the inner appearance then make judgment. I believe it was sin that re-designed us to become animalistic in perception.

A MAJOR HIGHLIGHT IN OUR DEVOTIONAL TEXT THIS MORNING SAYS,

“…He shall not judge by the sight of His eyes, nor decide by the hearing of His ears;” That was how man was originally created to function. And that is how to function if we will not become victims of satanic trappings.

In conclusion, I want you to understand that the level of hypocrisy in the Church today and the world at large is sickening. People have become craftier than you can ever imagine. Like I stated earlier, everyone seems to have a PhD in Theater Arts without even going to school or knowing what the degree is.

“Hypocrites! Well did Isaiah prophesy about you, saying:

And in vain they worship Me, Teaching as doctrines the commandments of men.’ ” Matthew 15:7-9 NKJV

Sadly, many (even in Church) have taken over this evil nature of the devil; they have taken on his nature as the deceiver and father of lies. They now find it very easy to act and live a life that is not really them.

That is why it has become expedient these days to bring people into our lives based on what we see in their hearts not based on what they present to us. And that can only be possible if we ourselves depend on God and spend quality time with Him to guide us before making decisions.

But most times we do not. Our hearts are in a haste, hence being in a state of not hearing truly form the LORD.

I have failed in this regard so many times also and it has hurt me very badly. I have people in my life that each time I look at tells me just one thing; “if you bring a relationship into your life based on what you judge with your natural perception, it will not bless you at the end.”

Friend, in the days that we find ourselves, if we do not step up in spiritual discernment and begin to make decisions on who we bring into or reject from our lives based on the state of their hearts we will be ruined. We must step up into a higher life – a life of not judging by the sight of your eyes, nor deciding by the hearing of your ears; but with righteousness or right standing with God.

May the LORD begin to teach us how to position in the Holy Spirit and have Him light up our spirits with discernment, then help us to use the light to search through the hearts of men before making relationship decisions.

LET THIS SCRIPTURE BE AN ADDITIONAL MEDITATION FOR US TODAY;

“A wise king sifts out the wicked, and brings the threshing wheel over them.”

“The spirit of a man is the lamp of the Lord, searching all the inner depths of his heart.” Proverbs 20:26-27 NKJV