The heavens declare the glory of God; and the firmament show His handiwork. Day unto day utters speech, and night unto night reveals knowledge. There is no speech nor language where their voice is not heard.

Their [c]line has gone out through all the earth, and their words to the end of the world. In them He has set a tabernacle for the sun,

Which is like a bridegroom coming out of his chamber, and rejoices like a strong man to run its race. Its rising is from one end of heaven, and its circuit to the other end; and there is nothing hidden from its heat. 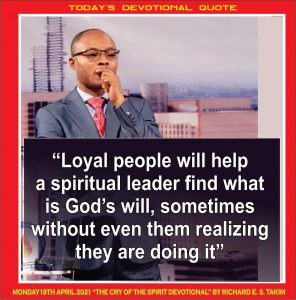 WELCOME TO THE 109TH DAY OF OUR YEAR OF HIGHER HEIGHTS!

Glory to God, today marks the 2nd anniversary of the Morning Could Television. The Bible says what God tells us in the ear, we should declare on the House tops. That is what we have been doing through this portal of mercy.

Because we have great journey ahead of us, and strength is needed for the journey, we have decided to mark it silently and just reflect on the goodness of the LORD and what He has done within these two years.

Indeed, we never knew the intention of the LORD the first time we set out on this prophetic journey. Like I have always said, it was not even my idea. But as a leader, you must understand that God will always surround you with people who will help you sense what His will is. This time around it was someone people will consider as beneath spiritually, because she is a spiritual daughter in the house.

But I have learned that no one is beneath anyone in the Kingdom of God.

We are all beneath Christ who even has placed us, prophetically, at the same level with Him. We just have ranking in the Kingdom, with responsibilities given to each one of us to oversee. Honor is only to be given to whom honor is due.

And talking about honor, the Bible says,

“Pastors who do their work well should be paid well and should be highly appreciated, especially those who work hard at both preaching and teaching.” 1 Timothy 5:17 LB

This is one of the scriptures that placed those of us who occupy the five-fold ministry gifts higher in rank than the rest of the believers but none of them is beneath us. Every spiritual leader and church member must understand this.

We are to be paid well and highly appreciated, especially those of us who are laboring hard at both preaching and teaching. I believe this is applicable to those who do the Pauline marathon preaching spree (apostle Paul). The way we do under this portal.

HE IS MY HERO AND ROLE MODEL WHEN IT COMES TO LABORING TO FORM CHRIST IN PEOPLE, AND DOING THE WORK DILIGENTLY.

So even when God placed me within this ranking in His kingdom, I still need sons and daughters who will help push me into certain will of God for the ministry. Not those who will weary and weaken me from doing God’s will.

I call those who weary leaders and weaken them from doing God’s perfect will the army of Saul. They knew when Samuel said they should not bring anything from the slaughter of the Amalekites, yet they brought things back.

Saul made it clear that it was the Soldiers who brought those things back. Though it happened because he was not firm enough. He wanted to please them so they can remain loyal to him.

I leaned from his error that you cannot make people loyal by pleasing them, especially against the will of the LORD. Only the LORD can raise for a leader loyal people for the assignment He may have given.

Sadly, the Devil know how to use misinformed and misguided believers to call the loyalty of the extremely loyal, worship. The vision is to weary the people and stop them from being loyal to the vision and the vision touch bearer. Once they become weak and withdraw extreme loyalty to the vision, he knows it will die a natural death.

Loyal followers will help a spiritual leader find what is God’s will, sometimes without them even knowing they are doing it. Some will go as far as propelling you into it and feel fulfilled doing that. That is the story of the Morning Cloud Television.

It started with one person who flouted the idea, then continued with others who took and ran with it, and completed with those who took loans to help us secure the equipment and other things. By God’s mercy I coordinated everything and did other sacrificial things I don’t need to put in print; because I still do them today.

OUR DEVOTIONAL TEXT TODAY IS A MAJOR BIBLE PROPHECY THAT GETS FULFILLED IN EVERY SPIRITUAL AGE AND SEASON.

The first time it was fulfilled was in Acts chapter 2, where the prophetic words coming out of the 120 at the upper room was spoken and heard in the languages of those who assemble from different parts of the world, to mark the Day or feast of Pentecost.

A major highlight in it says,

“Day unto day utters speech, and night unto night reveals knowledge. There is no speech nor language where their voice is not heard….

their line has gone out through all the earth, and their words to the end of the world. In them He has set a [d]tabernacle for the sun…,”

On the Day of Pentecost, the voice of the LORD was heard in the different speeches and languages of those who assembled. The Bible says,

“Many godly Jews were in Jerusalem that day for the religious celebrations, having arrived from many nations.

And when they heard the roaring in the sky above the house, crowds came running to see what it was all about, and were stunned to hear their own languages being spoken by the disciples.

“How can this be?” they exclaimed. “For these men are all from Galilee, and yet we hear them speaking all the native languages of the lands where we were born!

Cretans, and Arabians. And we all hear these men telling in our own languages about the mighty miracles of God!” They stood there amazed and perplexed. “What can this mean?” they asked each other Acts 2:5-13 LB

Actually, God wants everyone to hear the gospel in their own language. That is one major thing He is fulfilling by the hands of translators of the gospel, who are doing a fantastic job. It is also the purpose of the gifts of speaking in tongues.

BUT THERE IS ANOTHER PART OF THAT PROPHECY I WANT TO HIGHLIGHT.

“Their line has gone out through all the earth, and their words to the end of the world. In them He has set a tabernacle for the sun…,”

That is the part of the prophecy that concerns us, that is the part to be fulfilled through the media, especially via satellite and the world wide web or internet.

It is through the media that the line of the LORD can easily go through all the earth, and the word of the LORD to the end of the world. There will be people who will be genuinely saved and made disciples of Christ in the process, even without meeting the preacher face to face.

The Bible made it clear that in them, will a Tabernacle be set for the sun of righteousness. They will also rise and fulfill their ministries and be found in Heaven in the end of time.

God wants the revelation of His saving grace for mankind to be known, line upon line, and precept upon precept. He wants the nations to be made His disciples, and the time is short.

But so many churches have, sadly, reduced the great commission to just making people recite the sinner’s prayer. However, the mandate was, and is still to make the lost able disciples of Christ, and that does not happen by the recitation of the sinner’s prayer.

I believe strongly that God is using the Morning Cloud Television to remove the bottle necks in our own territory and make men disciples of Christ through its content.

So today I will like you to share with us on the comment box, by way of appreciating God, what the LORD has used the station and its channel to do in your life.

I believe someone will read it and get blessed by what the LORD may have done in your life.

“Come, behold the works of the LORD, what desolations he hath made in the earth.

He maketh wars to cease unto the end of the earth; he breaketh the bow, and cutteth the spear in sunder; he burneth the chariot in the fire.” Psalm 46:8-9 KJV

“When the LORD turned again the captivity of Zion, we were like them that dream.

Then was our mouth filled with laughter, and our tongue with singing: then said they among the heathen, The LORD hath done great things for them.”

The LORD hath done great things for us; whereof we are glad. Turn again our captivity, O LORD, as the streams in the south.” Psalm 126:1-4 KJV