“So what do we do? Keep on sinning so God can keep on forgiving? I should hope not! If we’ve left the country where sin is sovereign, how can we still live in our old house there?

Or didn’t you realize we packed up and left there for good? That is what happened in baptism. When we went under the water, we left the old country of sin behind; when we came up out of the water, we entered into the new country of grace—a new life in a new land!

Each of us is raised into a light-filled world by our Father so that we can see where we’re going in our new grace-sovereign country. Romans 6:1-5 The Message Bible 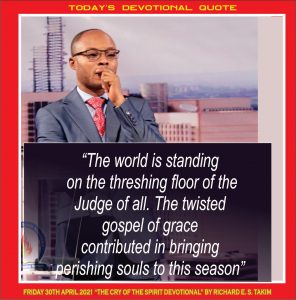 WELCOME TO THE 120th DAY OF OUR YEAR OF HIGHER HEIGHTS!

We bless the LORD of Heaven and Earth for bringing us through a hundred and twenty days of this year, safely. The paths He made us to walked in, are responsible for this, because many have died and sadly many will still die. But God in His mercies, have been keeping us on the paths of peace.

One-way God make people walk on the paths of peace is by teaching them His word or confronting them with it.

That is why God spoke through the prophet Isaiah saying;,

“Come. Sit down. Let’s argue this out.” This is GOD’s Message: “If your sins are blood-red, they’ll be snow-white. If they’re red like crimson, they’ll be like wool.

When you therefore see people dying like dogs, you have seen the death of rebels. The Bible says if God presents His word of truth and righteousness to us and we do not chew and swallow in that word, a time is going to come that we will die like dogs for rebelling; for not chewing and swallowing.

When you chew and swallow, it takes you from the paths of sudden destruction to the paths of great peace in life. But if we are willful and stubborn, we will die like dogs according to scriptures.

THESE THINGS, SOMETIMES, ARE THINGS THEY BURY AND DO NOT WANT TO TALK ABOUT.

There are people who delight in feasting on other people’s husbands or wives. What they are doing with them are making the families of those men and women to burn like fire. Do you think you will be doing something fleshy with a married man or women and not die like a dog one day? If you think so, then you are stupid!

If you keep asking God to forgive you, without repenting from it, one day you will die like a dog because you are a rebel.

Friend, there is nothing like forgiveness in God’s kingdom if there is no repentance. The gospel of, “God forgiving us of our sins without we repenting of them,” is a false gospel preached by perverted grace preachers and it has brought the world to where we are today; death, death, death, even in our churches.

We think that when we do it and cry unto God to forgive us, and after a while go back to it again and cry again, and continue that way, all will be well. Nothing will be well. A time will come that you will just die like a dog.

And that will be when the judge of all Himself, whose ways you have refused to follow will bring the entire planet to the threshing floor of reaping what have been sown over a season of life.

That is why when people are getting close to that season, God will start sending strong messages from His throne room, to confront them of their ways and provoking them to repentance. So that they can separate from what He wants to eliminate.

If they fail to heed, the season will come upon them like a travailing woman, killing them like dogs. The Bible says,

CHILD OF GOD, THE WORLD IS STANDING ON A THRESHING FLOOR AS WE SPEAK.

The threshing floor manifest as a harvest season where evil seeds that were sown over the years are harvested as sudden deaths.

The twisting of the grace gospel is what has blinded us in the church to this Bible Truth. The Bible clearly states that seed time and harvest shall not cease. But that beautiful scripture in Genesis 8:22 have being reduced to a money making scriptures by many preachers but it holds great truths about the planet we live in.

If you put it side by side Galatian 6 that says,

“Be not deceived; God is not mocked: for whatsoever a man soweth, that shall he also reap”

you will understand that, it is not just the good deed of spreading the gospel with your money that brings people into a season of harvest of blessings.

The evil deed of ignoring the gospel and the warning finger of the LORD over time also has its own harvest season.

The evil deeds of continuing in a life of sexual immorality, secret sins, hypocrisy, tempering with another woman’s husband, tempering with another man’s wife, sleeping with Church members as a pastor, stealing, lying, twisting the scriptures to fit you, ignoring God’s warning in the process and not repenting at all, has a way of bringing men and women to a harvest season of dying like dogs, according to scriptures.

LET US END THIS MONTH BY SAYING “ENOUGH OF THIS. I WILL NOT DO IT AGAIN. SO HELP ME GOD

If we do not do this, someone will soon die like a dog. Consider this word as a word of grace and mercy from the LORD to us. Including me writing this words to you. I have to also repent of the sins in my life. The days of sinning continuously, are over for any of us, if we do not want to die like dogs.

Yes, I have to keep searching myself to see if there is any area of rebellion to deal with. The word of the LORD is usually a two edged sword. It also applies to the one preaching it.

God is crying against continuous rebellion this morning. He wants us to desist from it and start killing a life of keeping-on-sinning and confessing-without-repentance.

Our devotional text today is about what is expected of us after committing our hearts to the LORD. A major highlight in the text says,

“So what do we do? Keep on sinning so God can keep on forgiving? I should hope not!”

If we’ve left the country where sin is sovereign, how can we still live in our old house there? Or didn’t you realize we packed up and left there for good?

Living in the old house of satisfying our sinful passions and carnal cravings, will plunge us into this season of dying like dogs. Jesus has died on the cross to save is from the penalty and practice of sin. He has given us a salvation, and made His Holy Spirit available to help us.

It is important that we start working out that salvation with fear and trembling, by engaging the Holy Spirit to help us through a life of fasting, prayers, application of God’s word and separation from things that plunge us to sin.

When we gave our lives to Christ, we left the old country of sin behind; … we entered into the new country of grace—a new life in a new land! So we should cease from living that old life. We should engage the grace of God upon our lives through persistent fasting and prayer, coupled with word intake, to come into the realm of having dominion over sin.

If we keep yielding to influences that makes us fall into sexual sins, or keep us planted in a life of iniquity and trespasses, or confessing without turning away from it, we will die like dogs. And God does not want us to die like dogs. He wants us to fulfill our days and die like warriors of righteousness or martyrs of Kingdom Advance.

May you step into the next month with a fresh resolve for continuous righteousness!

MAKE THIS SCRIPTURE AS ADDITIONAL MEDITATION FOR THE DAY!

Could it be any clearer? Our old way of life was nailed to the cross with Christ, a decisive end to that sin-miserable life—no longer captive to sin’s demands!

What we believe is this: If we get included in Christ’s sin-conquering death, we also get included in His life-saving resurrection. We know that when Jesus was raised from the dead it was a signal of the end of death-as-the-end. Never again will death have the last word.

When Jesus died, he took sin down with him, but alive he brings God down to us. From now on, think of it this way: Sin speaks a dead language that means nothing to you; God speaks your mother tongue, and you hang on every word. You are dead to sin and alive to God. That’s what Jesus did.

That means you must not give sin a vote in the way you conduct your lives. Don’t give it the time of day.

Don’t even run little errands that are connected with that old way of life. Throw yourselves wholeheartedly and full-time—remember, you’ve been raised from the dead!—into God’s way of doing things. Sin can’t tell you how to live. After all, you’re not living under that old tyranny any longer. You’re living in the freedom of God.

So, since we’re out from under the old tyranny, does that mean we can live any old way we want? Since we’re free in the freedom of God, can we do anything that comes to mind? Hardly.

You know well enough from your own experience that there are some acts of so-called freedom that destroy freedom.

All your lives you’ve let sin tell you what to do. But thank God you’ve started listening to a new master, one whose commands set you free to live openly in his freedom! Romans 6:6-18 The Message Bible