“Now a certain man of the sons of the prophets said to his neighbor by the word of the LORD, “Strike me, please.” And the man refused to strike him.

Then he said to him, “Because you have not obeyed the voice of the LORD, surely, as soon as you depart from me, a lion shall kill you.” And as soon as he left him, a lion found him and killed him.

“And he found another man, and said, “Strike me, please.” So the man struck him, inflicting a wound. Then the prophet departed and waited for the king by the road, and disguised himself with a bandage over his eyes.

“Now as the king passed by, he cried out to the king and said, “Your servant went out into the midst of the battle; and there, a man came over and brought a man to me, and said, ‘Guard this man; if by any means he is missing, your life shall be for his life, or else you shall gpay a talent of silver.’

While your servant was busy here and there, he was gone.” Then the king of Israel said to him, “So shall your judgment be; you yourself have decided it.”

And he hastened to take the bandage away from his eyes; and the king of Israel recognized him as one of the prophets.

Then he said to him, “Thus says the LORD: ‘Because you have let slip out of your hand a man whom I appointed to utter destruction, therefore your life shall go for his life, and your people for his people.’ ” 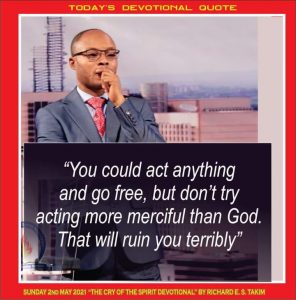 WELCOME TO THE 122ND DAY OF OUR YEAR OF HIGHER HEIGHTS!

Today is another day that the LORD has given us. We shall rejoice and be glad in it, even as we prepare for Sunday services. For us at the Cry of the Spirit, we are not ready to begin in person worship yet because we are not COVID-19 restrictions ready. There are things to be acquired.

So join us for Church in the House through the Morning Cloud Television, this morning from 10 am EAT. Services will be streamed live. So you can follow on Television or through our social media handles.

There are people who have destroyed themselves walking in feelings they call mercy. We must understand that the mercy of God is not feeling based but faith based. And faith comes by hearing, and hearing the word of GOD.

They walked in sentiments and offered helps that God never commanded, and they came into abject lack and poverty. Whenever we do things that God did not command at an immediate present, it can bring destruction.

CONCERNING THIS KING, THE BIBLE SAYS;

“So it was, in the spring of the year, that Ben-hadad mustered the Syrians and went up to Aphek to fight against Israel.

Then a man of god came and spoke to the king of Israel, and said, “thus says the LORD: ‘because the Syrians have said, “the LORD is god of the hills, but he is not god of the valleys,” therefore I will deliver all this great multitude into your hand, and you shall know that I am the LORD.’”

and they encamped opposite each other for seven days. So it was that on the seventh day the battle was joined; and the children of Israel killed one hundred thousand foot soldiers of the Syrians in one day.

But the rest fled to Aphek, into the city; then a wall fell on twenty-seven thousands of the men who were left.

As you can see in this story, the man was in a serious problem when God rescued him from his enemy, the king of Syria. God manifested as the God of the mountain and the God of the hills. He gave this king a great victory in battle. But the man did not let the victory last long, he became more merciful than God and it slipped through his fingers.

Then his servants said to him, “Look now, we have heard that the kings of the house of Israel are merciful kings. Please, let us put sackcloth around our waists and ropes around our heads, and go out to the king of Israel; perhaps he will spare your life.”

So they wore sackcloth around their waists and put ropes around their heads, and came to the king of Israel and said, “Your servant Ben-Hadad says, ‘Please let me live.’ ”And he said, “Is he still alive? He is my brother.”

Now the men were watching closely to see whether any sign of mercy would come from him; and they quickly grasped at this word and said, “Your brother Ben-Hadad.”

So he said, “Go, bring him.” Then Ben-Hadad came out to him; and he had him come up into the chariot.

So Ben-Hadad said to him, “The cities which my father took from your father I will restore; and you may set up marketplaces for yourself in Damascus, as my father did in Samaria.”

The key line in this scripture is what the enemy knew about this king. That was what he used against him. They said, ““Look now, we have heard that the kings of the house of Israel are merciful kings.” That was all they needed and used against the man.

Many times I have made this same mistake and had to depend on seasons of seeking GOD’s forgiveness through intense praying and fasting, to be delivered. Apostle Paul said, these things were written for our admonition upon whom the end of the age has come. We must learn from the error of this king if we will not suffer terrible things for showing mercy.

WE MUST BE CAREFUL WHAT OUR ENEMY KNOW ABOUT US.

There are so many things we do as believers that do not let us stay long enough in victory places. So many of us seems cursed to live in sorrow and defeat in life, because of how we manage the principle of walking in mercy. We behave exactly like this king once we begin to experience peace in life, and then eventually lose everything, and return to square one.

Our devotional text tells us of the judgment of GOD on this king, the very thing that happened to us each time we act as if we are more merciful than GOD. A major highlight in the text says,

Then he said to him,

“Thus says the LORD: ‘Because you have let slip out of your hand a man whom I appointed to utter destruction, therefore your life shall go for his life, and your people for his people.’ ”

This king came into judgment for showing mercy to who GOD has not shown mercy to – he showed mercy to someone appointed by the watchers for destruction. This is where we must be sensitive in the Spirit to know who to extend mercy to, and separate them from those we must wait on the LORD to guide us before we extend mercy to them.

Child of God, you could act anything, but don’t ever attempt to acts as if you are more merciful than God. It will ruin your life. To be carnally minded is still death. It has not change, so don’t be carnally minded in these things. We will never know who GOD has marked for destruction waking in the flesh or the carnal mind. And trust me, there are people who have been marked for destruction even in our age.

You know them by what happens to people after they show them mercy, especially through generosity. It is God’s will that we show mercy to all who ask for it, but under the strict supervision of the Holy Spirit.

The safest way to show mercy to those who ask for it, is to do it as an extension of the mercy of God to them. And that will require being wired to the Holy Spirit like Jesus, our savior was when He was physically on earth.

The Bible says He never judged according to what He saw or heard with his natural ears. He judged by the Spirit. He showed mercy to all who came to Him by the Spirit. That is why you will never find any story of Him showing mercy in the flesh and running into trouble.

The greatest act of mercy He showed was on the Cross where He died and cried “it is finished.” Even that was done in the Spirit. The Bible says He did it through the eternal Spirit.

There is so much about this Bible through, but I believe the message have been passed.

LET THIS SCRIPTURE BE AN ADDITIONAL MEDIATION FOR YOU TODAY!

A shoot will come up from the stump of Jesse; from his roots a Branch will bear fruit.

but with righteousness he will judge the needy, with justice he will give decisions for the poor of the earth. He will strike the earth with the rod of his mouth; with the breath of his lips he will slay the wicked.

Righteousness will be his belt and faithfulness the sash around his waist. Isaiah 11:1-5 NKJV