“Do not remove the ancient landmark which your fathers have set.” Proverbs 22:28 NKJV 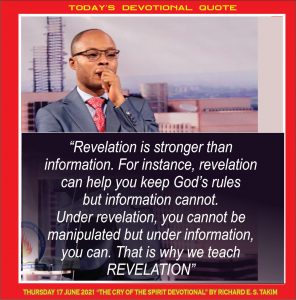 WELCOME TO THE 168TH DAY OF OUR YEAR OF HIGHER HEIGHTS.

This is the Day the LORD has made! We shall rejoice and be glad in it. The Psalmist said marvelous are His works and that our souls know very well. Because He formed our innermost being and knitted us together in our mother’s wombs.

There was no advance technology to discover how babies are formed or how they grow in their mother’s womb in days of David, but he knew that by the Holy Spirit. That is why you find only those who refuse to acknowledge what every soul instinctively know denying even the existence of God.

But if any man humbles himself and look deeper into himself, he will realize God’s faithfulness and reality by His works in creation. It is called revelation!

Yesterday we were dealing with part of the witchcraft software called trespass. Our devotional text speaks about not removing ancient landmarks which fathers have set.

In the days of the Bible, removing the ancient landmark which fathers have set was a very terrible trespass. Today, people still suffer the consequences of trespassing ignorantly. We need to know by revelation what trespass, and we are going to get that by beginning with the first trespass that ever existed; the trespass of Lucifer.

THE TRESPASS OF LUCIFER

How you are fallen from heaven, O Lucifer, son of the morning! How you are cut down to the ground, you who weakened the nations!

For you have said in your heart: ‘I will ascend into heaven, I will exalt my throne above the stars of God; I will also sit on the mount of the congregation on the farthest sides of the north;

I will ascend above the heights of the clouds; I will be like the Most High.’ Yet you shall be brought down to Sheol, to the lowest depths of the Pit. Isaiah 14:12-15 NKJV

This scripture tells us how trespass began. It began when iniquity was found in Lucifer. In going against the will and way of God for his life (INIQUITY), Lucifer went beyond the boundaries God has set for him. Trespass is going beyond boundaries that GOD has set. The Bible says,

“Do not remove the ancient landmark which your fathers have set.” Proverbs 22:28 NKJV

In the days of the Bible, fathers do share lands and leave beacons to demarcate the boundaries. People incur the wrath of God each time they remove those landmarks for mischievous reasons. The landmark was simply a truth concealed. God has boundaries or landmarks He set on earth – there are things in His word that we are not expected to infringe on. Instructions set to secure us.

For Lucifer, the boundary or landmark was within his place and purpose of creation. But the Bible says he began to say in His heart,

“I will ascend into heaven, I will exalt my throne above the stars of God; I will also sit on the mount of the congregation on the farthest sides of the north; I will ascend above the heights of the clouds; I will be like the Most High.’

Every “I WILL” in His statement pitched him against the will and ways of GOD for him, and took him beyond the boundaries God has set for him. But the angels with him did not know. That was why they fell with him.

Most times we do not recognize when we have transgressed against God until the consequences begin to come upon us. Sadly, when they come we call it demonic attacks. The consequence of Lucifer’s trespass was the same as the consequence of his iniquity. And going through it will help us know when we are living in trespass.

HOW TO KNOW IF YOU ARE LIVING IN TRESPASS.

For instance, so many ladies did not know that just packing into a man’s house to live with him, or him moving into theirs to live with them, was no marriage until they encountered the revelation of Jesus Christ on marriage matters. Sadly, preachers have called it marriage. They convinced people that there was nothing wrong with it, hence misleading so many.

The immediate pleasure in the iniquity and trespass concealed the transgression and made them believe there was no problem. Satan has a kind of an immediate ‘blessing’ for those who trespassed or go against the boundaries God has set.

Another reason why you cannot tell when you are living in trespass is because of the terrible ignorance of the divine boundaries or restriction God set around the many aspects of life when man was created. The present Church have been kept ignorant for too long by empty and shallow preaching and soul-satisfying motivational talks that leaves the spirit starving as the gospel.

Eve transgressed because she did not know by revelation of the boundary God has set around the garden of Eden concerning the tree of sound judgment.

When God told Adam to eat from every other tree in the Garden exception of the tree of sound judgment (tree of the knowledge of good and evil), it was a boundary He set. Eve was not there when God set that boundary or instituted the restriction. She had no revelation knowledge of it. She just had the information from Adam; and revelation is usually stronger than information hence she could not keep it.

REVELATION WILL KEEP YOU FROM BREAKING THE RULES BUT INFORMATION WILL NOT.

If you are ignorant of the boundaries God set around earthly life, you will spend your days making decisions that trespass against them without even realizing it. Only the consequences will tell you “you have been living in trespasses.”

That is why the primary calling of apostles and prophet is to teach believers the boundaries God has set (by revelation) around marriage, money making, prayer, fasting, giving, singing, worshiping, living, and all the issues of this life.

A successful witchcraft attack is actually a symptom. It is a symptom that one is living in sin, iniquity or trespass!

It means if we are under successful witchcraft attacks, it is a sign that we are living in sin, iniquity or trespass! That brings us to the ten ways to know when you are living in trespass. You find them clearly revealed in the many things that Ezekiel 28:16-19 and Isaiah 14:15 said happened to Lucifer when he trespassed due to the Iniquity that was found in him.

(1). HE WAS FILLED WITH VIOLENCE WITHIN: Meaning, if your life is full of violence, it’s a sign that you are either living in trespass or iniquity – in other words you are either spending your days beyond the boundaries God have set for you, or you are living a life that is against His Spirit nature, will, or ways for your life.

I have come to realize that whenever the life of a true child, man or women of God is cut short violently, most time the reason is not because Satan was too strong. The reason is he or she, sometimes in a bid to do the work of the LORD, must have missed his or her steps somehow. That should explain the many violent deaths of warriors of righteousness in our age and in ages past.

If there is no iniquity or trespass in your decisions, steps or ways, there will be no violence in your paths! This is applicable to all areas of life especially marriage.

Violence in our lives is always a sign that we are one way or the other, living in iniquity or trespass, not necessarily sin! Removing the ancient landmarks that God set around His will or way for our lives will fill it with violence. That is why polygamy fill kids with hate and bitterness for each other. Even the houses of David and Solomon were not spared.

Polygamy is not a sin per say, but a trespass or iniquity, depending on how you got into it.

(2). HE SINNED: This second hallmark tells us that if our lives are full of sin, or if we are living in habitual sin, it’s a sign that iniquity is found in us and we are trespassing or going beyond the boundaries God has set in His word in certain aspects of our lives.

We fall into sin when we walk away from His restrictions or boundaries in the faith. You see that depicted even in the Old Testament.

All the evil we do as believers are products of going beyond the boundaries God has set or ways if life He has established for us.