“How you are fallen from heaven, O Lucifer, son of the morning! How you are cut down to the ground, you who weakened the nations!

For you have said in your heart: ‘I will ascend into heaven, I will exalt my throne above the stars of God; I will also sit on the mount of the congregation on the farthest sides of the north;

I will ascend above the heights of the clouds; I will be like the Most High.’ Yet you shall be brought down to Sheol, to the lowest depths of the Pit.” Isaiah 14:12-15 NKJV 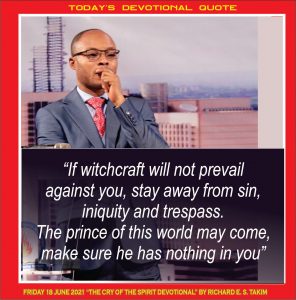 WELCOME TO THE 169TH DAY OF OUR YEAR OF HIGHER HEIGHTS.

I know that before we were formed in our mother’s wombs, God had ordained this day for us. Even when it seemed some of us were not to see this day, we are here today. He is ever merciful and kind and ever gracious.

His love for us was commanded towards us, in that while we were yet sinners, Christ died for us. His severity on sin, Satan and evil and corrupt system of this world was also commanded that is why there is the fear of God in some hearts and that is why we have not been consumed.

To Him belong all the glory in Jesus precious name!

We have been looking at excerpts from our book OVERCOMING WITCHCRAFT BY THE GREATNESS OF GOD’S POWER. It’s been enlightening and revolutionary by the mercies of the LORD. We have come to discover that the witchcraft software is the real reason why many do come under successful attacks of the evil one.

It’s been made clear that anywhere you see people under successful attacks of the witchcraft, there is a witchcraft software in their lives, making those attacks possible. And we have also seen what this software is. Jesus said;

“And now I have told you before it comes, that when it does come to pass, you may believe. I will no longer talk much with you, for the ruler of this world is coming, and he has nothing in Me.” John 14:29-30 NKJV

I listen to a woman yesterday share with me in pain what she and her children have been going through. From mysterious snakes appearing in their homes, to blindness and illnesses. When you hear how she got into that home and who she married, you can tell why those things may never cease.

SHE JUST HAS TO BE STRONG!

There are witchcraft attacks that will never cease because the people literally built their lives through sin, iniquity, and trespass all at the same time. Some got married through the software and cannot not leave those marriages because of how improper it will be; hence the attacks remain. They just have to remain on their knees and in a good church for survival.

We have shared about the first two aspects of the software, sin and iniquity. Now we are looking at the last aspect – trespass. We have been uncovering how to know you are in trespass.

If you look at the life and times of the first creature to commit trespass, Lucifer, you will discover ten signs that one is living, either in iniquity or trespass or ten ways to know that you are in either iniquity or trespass. Today we will be picking up from the third, having ended yesterday’s devotional on the second.

3. HE WAS EXPELLED OUT OF GOD’S PRESENCE: Meaning, if God’s manifest presence is not in your life, it’s a sign that iniquity is found in you or you are living a life of trespass. if the Omni presence of GOD cannot translate into His manifest presence anywhere, there is iniquity or trespass there.

There are Churches where you cannot experience God’s manifest presence. In fact, people do not even know what it is. In such places, they stick to shadows and lack substance. Whenever you see a Church where the manifest presence of God does not manifest, it’s a sign that they Church is living in iniquity or trespass!

Sadly, 85% of local Churches, preachers and ministries have been expelled from God’s glory due to iniquity and trespass. They now struggle with a mixture of the anointing and sorcery. You cannot find the true presence of the LORD and His fullness on display. That is why there is no transformation in the lives of people – from the pulpit to the pew.

You see guys and lesbians going about with the title of Prophets and prophetesses, and moving in a corrupt and demonic version of the supernatural and saying “if God is not please with us, why is this anointing on us?” But people do not know that it is not the anointing of the Holy One but that of the anointed cherub.

Here is a mystery you must know; Iniquity and trespass will not let God inhabits the lives of people. It will expel them from the fullness of His presence but leave them in the outer court hoping that they repent. That is why today we fast for 70 days, 40 days, 21 days, 7 days, and 3 days without food, yet we do not see God the way our fathers saw Him with fewer days of fasting and prayers. For us, we only become lean and thin! No glory in our lives.

You do not unlock the glory when you fast or pray in iniquity or trespass. Saul declared a fast in trespass and weakened the capacity of God’s people to lay hold on the victories God gave them.

THEY DID NOT KNOW GOD HAD EXPELLED HIM FROM HIS PRESENCE, AND WERE STILL FOLLOWING HIM (THE DILEMMA OF SO MANY BELIEVERS TODAY).

And the men of Israel were distressed that day, for Saul had placed the people under oath, saying, “Cursed is the man who eats any food until evening, before I have taken vengeance on my enemies.” So none of the people tasted food.

Now all the people of the land came to a forest; and there was honey on the ground. And when the people had come into the woods, there was the honey, dripping; but no one put his hand to his mouth, for the people feared the oath.

But Jonathan had not heard his father charge the people with the oath; therefore he stretched out the end of the rod that was in his hand and dipped it in a honeycomb, and put his hand to his mouth; and his countenance brightened.

Then one of the people said, “Your father strictly charged the people with an oath, saying, ‘Cursed is the man who eats food this day.'” And the people were faint.

But Jonathan said, “My father has troubled the land. Look now, how my countenance has brightened because I tasted a little of this honey.

How much better if the people had eaten freely today of the spoil of their enemies which they found! For now would there not have been a much greater slaughter among the Philistines?” 1 Samuel 14:24-30 NKJV

Wisdom demands that you withdraw from every leader God has expelled from his presence. There are Saul Church leaders everywhere today. Whatever happened to Israel under Saul will happen to you under a Saul spiritual or political leader.

I know preachers today we lived in iniquity and trespass in the 1990s and were expelled from the presence of God as a result without even them knowing. Their ministries stopped growing and things shut down completely. Then they moved from place to place to see if things will pick, and nothing picked.

For instance, the one who just died, TB Joshua, empowered so many of these young ministers. That is why everyone of them is attacking us and defending him. I saw one yesterday saying, “Be careful what you say about a prophet, because even in death he is still a prophet.”

THE TRUTH IS, NO ONE DISPUTES THAT TB JOSHUA WAS NO PROPHET. SO DO NOT GET US WRONG!

The man, by his roots and fruits, was a Major prophet of Baal who turned many young ministers God expelled from his presence into powerful prophets of Baal like himself also.

God expelled these ministers from His presence because of their trespasses and iniquities, and in their ignorance they went to meet him or meet those who met him, thinking they were prophets of GOD; and collected powers from them. They used his water and all other deliverance inventions.

It is dangerous to lead a Christian life or run a ministry that is born out of expulsion from God’s presence. People will not know you have been expelled, and sometimes you yourself will not know. It is the worst thing to happen to a child or minister of God.

Some of these young ministers were expelled when they were sleeping with multiple young woman and living like harlots with them and still preaching. They were involved in so many scandals and breaking the hearts of young women who they promised marriages but never married them.

Some of the women cried unto God in their pain and God expelled the preachers form His manifest presence as a result because they would not repent. He expelled them but they did not know.

They later blew up in ministry and extend to other nations raising spiritual sons and daughters in places like Kenya, Tanzania, Uganda, the United States, Europe and etc. I have counselled that you run away from any preacher who calls wizards Great power of God.

Let he that has an ear hear what the Spirit is saying to the Churches. You may attack us because of this, so was Elijah, Jeremiah, Isaiah and any other person who was before us.

If witchcraft will not prevail against you, stay away from sin, iniquity and trespass. The prince of this world may come, make sure he has nothing in you.